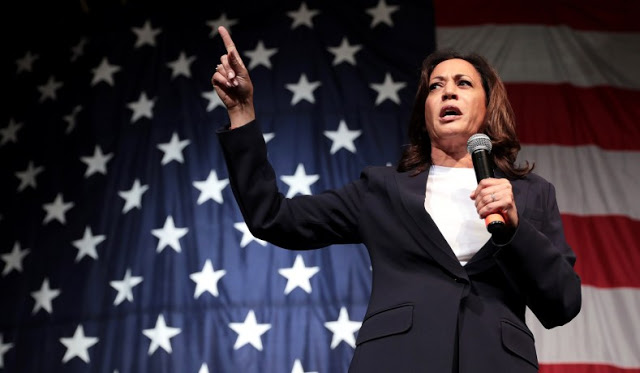 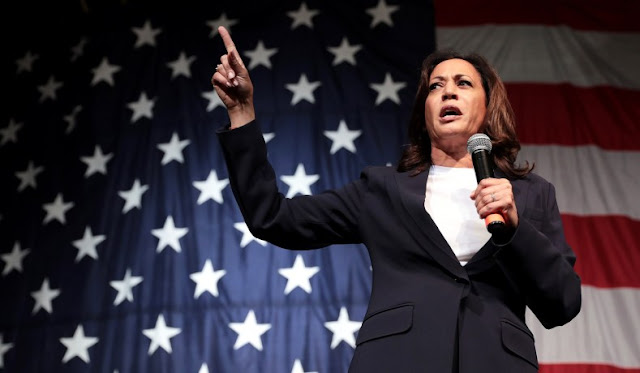 Sen. Kamala Harris speaks at the 2019 Iowa Democratic Wing Ding in Clear Lake, Iowa, August 9, 2019. (Gage Skidmore)
Nuclear power, clean and carbon-free, is taboo for the major candidates
Democratic presidential candidates argued on Wednesday evening, during a seven-hour event broadcast on CNN, that they would stop at nothing to stop climate change.
Kamala Harris, who has faded in the polls, set the tone during her pre-primetime appearance. The California senator said that as president, she would somehow abolish the filibuster to implement the Green New Deal. By 2030, Harris vowed, America will have only electric school buses, and by 2045 we will have 100 percent zero-emission vehicles.
Harris would change dietary guidelines to reduce red-meat consumption. She would ban fracking. She would ban offshore drilling. She’d even ban plastic straws.
What about increasing production of nuclear power, which doesn’t produce carbon dioxide emissions?
“Given the existential threat to humanity posed by global warming,” one questioner asked Harris, “do you believe the time has come to put past nuclear-power failures into perspective and to embrace a new and smarter generation of nuclear-power technologies given all that has been learned and the scale of the crisis we’re confronting today?”
Well, Harris replied, she wouldn’t do that. “The biggest issue that I believe we face in terms of nuclear energy is the waste and what are we going to do with that.” Harris went on to say that it would “never” dispose of nuclear waste at Yucca Mountain in Nevada.
Harris dodged when asked whether she’d phase out nuclear power entirely, as Bernie Sanders has proposed. She kept her focus on protecting states from having nuclear waste stored on federal land within their borders, a key issue in Nevada, which happens to hold the third nominating contest in the Democratic race.
It was the kind of calculating response one has come to expect from Harris. One half-expects  her to reassure voters today that her Paper Straws for All plan will be phased in over a ten-year period, and there will still be a plastic-straw option that is heavily regulated by the federal government.
Joe Biden was his typical self: blustery and struggling to make clear points. He wasn’t asked about nuclear power, and he didn’t bring it up. He favors keeping the plants in operation but not building new ones.
Surely Elizabeth Warren, who has been surging in the Democratic race as the candidate of ideas, would take a more serious approach than Harris to nuclear power? Nope.
Warren conceded that nuclear power is “not carbon-based” but said that it has “a lot of risks” associated with it, such as “the risks associated with the spent fuel rods that nobody can figure out how we’re going to store these things for the next bazillion years.”
“In my administration, we’re not going to build any new nuclear power plants, and we are going to start weaning ourselves off nuclear energy and replacing it with renewable fuels. . . . We’re going to get it all done by 2035, but I hope we’re getting it done faster than that,” Warren said. “That’s the plan.”
Bernie Sanders was on the same page as Warren, arguing in favor of shutting down nuclear-power plants. “I think if you talk to the people in Japan in terms of what happened at Fukushima, talk to the people in Russia what happened in Chernobyl, you know what, they may not feel so comfortable with nuclear power,” Sanders said when asked about the fact that nuclear plants safely generate 70 percent of France’s power. “So I’m not a fear-monger here, and I wish the people in France the very best. But I think that the way forward, the most cost-effective way forward, the way forward that is safest is moving to sustainable energies like wind and geothermal.”
In short, 2020 Democrats argued that there is an existential environmental crisis, but we can’t be bothered to find the appropriate dirt heap under which we would dump the waste of a carbon-free energy source already in existence that actually works.
JOHN MCCORMACK is the Washington correspondent for National Review and a fellow at the National Review Institute. @mccormackjohn
https://www.nationalreview.com/2019/09/2020-dems-well-do-anything-to-stop-climate-change-but-we-wont-do-that/
__________________
RELATED ARTICLE
Climate Change: A Convenient Excuse for Dems to Transform the Economy
By JONAH GOLDBERG | National Review 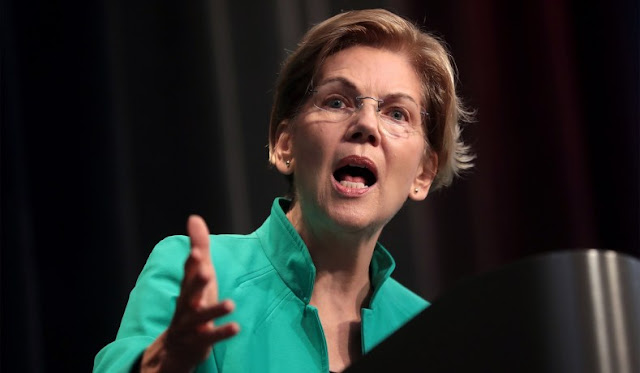 Sen. Elizabeth Warren speaks at the 2019 Iowa Federation of Labor Convention in Altoona, Iowa, August 21, 2019. (Gage Skidmore)
The idea that all life on this planet is in jeopardy if America doesn’t wean itself from fossil fuels is just hyperbole.
Climate change is an existential crisis,” Senator Elizabeth Warren declared Tuesday, unveiling her plan to fight climate change in advance of CNN’s interminable townhall event on the topic with ten Democratic presidential candidates.
The use of the term “existential crisis” is ironic. No doubt, they mean “existential threat,” i.e. that global warming threatens to end life on earth. It doesn’t. But we’ll get back to that in a second.
The term “existential crisis” comes from psychology or philosophy, not environmental science. An existential crisis is when you’re overcome with panic or dread about your place in the world or your purpose in the universe. If you’re depressed and ask “What’s it all about?” you might be having an existential crisis.
A giant asteroid barreling toward earth is an existential threat, midlife adultery is a sign of an existential crisis.
The irony is that concern over climate change — which is a real and legitimate concern — seems derived more from an existential crisis than from an existential threat.
At the CNN event, many of the Democratic candidates insisted that life on earth was at stake. Warren said climate change is an “existential threat” that “threatens all life on this planet.” According to Senator Bernie Sanders, “We are dealing with what the scientists call an existential threat to this planet, and we must respond aggressively; we must listen to the scientists. That is what our plan does.”
That’s not true. Our quality of life on earth might be threatened, but our existence isn’t. Now, of course, something can come up far short of an extinction-level event and still be really, really bad. But the idea that all life on this planet is in jeopardy if America doesn’t wean itself from fossil fuels is just hyperbole. And even if America did exactly that, there’s little reason to believe the rest of the world would follow suit.
Still, if we take them literally, not just seriously, they’re saying we’re doomed if we don’t implement some version of the Green New Deal — a sweeping, wildly expensive hodgepodge of proposals first unveiled by Representative Alexandria Ocasio-Cortez, that aims to eliminate carbon emissions inside of twelve years.
And yet, both Sanders and Warren (and others) are against using nuclear power to reduce carbon emissions. “In my administration, we won’t be building new nuclear plants,” Warren declared. “We will start weaning ourselves off nuclear and replace it with renewables,” by 2035. Sanders called nuclear power a “false solution” and vowed to end it.
It’s an odd argument. Sanders says we must “listen to the scientists,” but there are scads of scientists who think nuclear-waste storage is eminently manageable, including the National Academies of Sciences, Engineering, and Medicine. They report that the “consensus” is that safe geological storage is entirely feasible.
More importantly, if you honestly believe that climate change is an existential threat, akin to an impending asteroid strike, why would you rule out one of the only proven tools to combat it? It’s a bit like refusing to use a firehose on a burning orphanage because you’re afraid of the subsequent water damage.
There are plenty of people who despise nuclear weapons and want to see them eradicated. But it would be hard to take such people seriously if they argued against sending nuclear missiles into deep space to head off an extinction-level asteroid impact.
All the Green New Deal proposals are sold as huge economic bonanzas, offering lavish subsidies for displaced workers, socialized medicine, and other improvements to our quality of life.
And this is what I mean by the existential crisis underlying the alleged existential threat of climate change.
According to the Washington Post, in July, Saikat Chakrabarti, who then was Ocasio-Cortez’s chief of staff, admitted that “the interesting thing about the Green New Deal is it wasn’t originally a climate thing at all.” The Post reported that, in a meeting with Governor Jay Inslee (D., Wash.), Chakrabarti said, “Do you guys think of it as a climate thing? Because we really think of it as a how-do-you-change-the-entire-economy thing.”
Climate change is not the hoax that some claim it is. But to the extent that it’s a crisis, people like Sanders, Ocasio-Cortez, and Warren want to use it as an excuse to radically transform the American economy and political system along lines that have less to do with climate change and much to do with their ideological animosity to the status quo.
And when the fight against climate change conflicts with their fight for “social justice,” it’s climate change that takes a backseat.
The existential threat is the excuse for fixing the existential crisis of the American Left.
JONAH GOLDBERG holds the Asness Chair in Applied Liberty at the American Enterprise Institute. @jonahnro
https://www.nationalreview.com/2019/09/climate-change-excuse-democrats-transform-economy/ 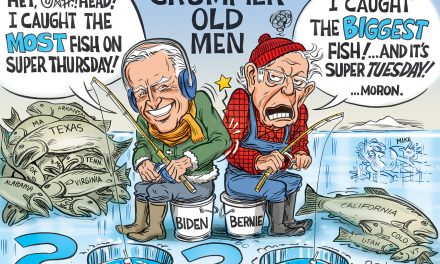