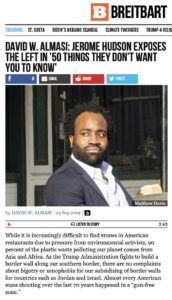 This review of Project 21 member Jerome Hudson’s new book was written by David W. Almasi and published by Breitbart:

While it is increasingly difficult to find straws in American restaurants due to pressure from environmental activists, 90 percent of the plastic waste polluting our planet comes from Asia and Africa. As the Trump Administration fights to build a border wall along our southern border, there are no complaints about bigotry or xenophobia for our subsidizing of border walls for countries such as Jordan and Israel. Almost every American mass shooting over the last 70 years happened in a “gun-free zone.”

These are just three of the secrets Jerome Hudson reveals in his eye-opening and highly readable new book, 50 Things They Don’t Want You to Know.  Hudson is quite successful in achieving the goal that his book “blows up and disproves some of the political left’s most treasured beliefs.”

The entertainment editor for Breitbart News and a member of the Project 21 black leadership network, Hudson approached writing 50 Things to show others what he came to realize during his own political awakening – that the political establishment and celebrity elite are “weaponizing emotion at the expense of facts and data that don’t yield the politically correct conclusions they desire.”

“I swallowed whole their carefully crafted narratives without objection,” Hudson admitted. And it was through years of critical research, in which he found fault with things that both liberals and conservatives were saying, that he eventually found a home in the new media environment created by Andrew Breitbart and others.

Having successfully made the transition, Hudson now wants to share what he learned along the way.

One secret that Hudson busts open is about carbon emissions attributed to climate change. The Trump Administration was roundly criticized for pulling the United States out of the Paris climate accord, which National Center for Public Policy Research President David A. Ridenour said would cause a “wrenching transformation of our economy,” destroying millions of American jobs yet “accomplish next to nothing.” Despite the pullout, and without media fanfare, Hudson reported, America reduced its carbon emissions by a half-percent in 2017 – leading the rest of the world for the ninth time in the past 17 years.

This achievement occurred without adherence to the Paris accord or the need for federal regulation like the “cap-and-trade” scheme attempted in the Obama era. And, like the plastic problem, Hudson noted that governments that are still Paris accord signatories – and critical of the U.S. pullout – are grossly behind in meeting their goals. China, Iran and even the European Union logged increased carbon emissions as the United States posted its decline.

Hudson also targeted the “fact-checkers” employed by social media companies for their bias. And he showed how they are often wrong. He wrote about how Snopes, which was dismissed as a fact-checker for Facebook, he wrote, hired fact-checkers who previous worked for the left-wing Raw Story and “openly espoused their left-wing views.” Snopes once went as far as to debunk a Babylon Bee satire that joked that CNN for buying a washing machine “to spin news before publication.” Snopes may not have gotten the humor, but a “false” rating for the Babylon Bee at that time could have diminished its ability to market its work and make money from it.

To ensure such criticism cannot be leveled against him, Hudson’s 50 Things is packed with facts. Over 13 percent of the book is endnotes that cite government-compiled statistics as well as legacy media and new media reports. This is the kind of attribution you cannot find in mainstream media reporting, and one of the reasons for the success of the new media in which Hudson now works.

While sobering – and sometimes downright scary – Jerome Hudson’s 50 Things They Don’t Want You to Know is a fast-paced, informative read that people won’t want to put down. And, as it gets closer to the holiday season, this book is something readers should also arm themselves with as they get ready for increasingly political Thanksgiving and Christmas family get-togethers.

The post 50 Things They Don’t Want You to Know, But You Need to Read appeared first on The National Center.

The Impeachment Hearings Have Been Useless