Our friend David Horowitz makes the case that our present political crisis is not the result of polarized views on policy, but rather is caused by the Left’s outpouring of vicious hate and determination to crush all opposition.

Everybody agrees that our country is in crisis – and agrees that it is the worst crisis since the Civil War. But at the same time, we tell ourselves a comforting tale about the source of the crisis that perpetuates the problem instead of providing a path to ending it. We say our politics are “divisive” and talk about “unity and healing” as though that would miraculously be achieved if everybody stopped … what? Disagreeing? All politics is divisive. That’s the healthy basis of our constitutional order: the freedom to disagree. To suppress disagreement, to outlaw it – as many Democrats and their Big Tech and media allies – are demanding these days, is to end democracy as we know it.

The problem is not that we disagree. We are not suffering as a nation from healthy disagreement. We are suffering from a Tsunami of Hate emanating from the Democrat Party that seeks to demonize, criminalize and extinguish dissent from the 75 million supporters of Donald Trump. It is now official Washington dogma that to question an election result – something the congressional Democrats have done in the face of every Republican presidential victory since 2000 – is now “insurrection” and “domestic terrorism,” or the incitement thereto, and needs to be prosecuted and suppressed. 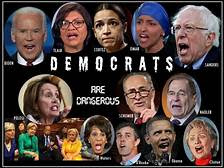 You can’t have a democracy if this is the attitude of a party that controls all three branches of government, is enabled by a corrupt and compliant media, and is determined not just to defeat, but to humiliate, destroy and expunge from the record an ex-president who is supported by a greater segment of the American electorate than any American leader before him. 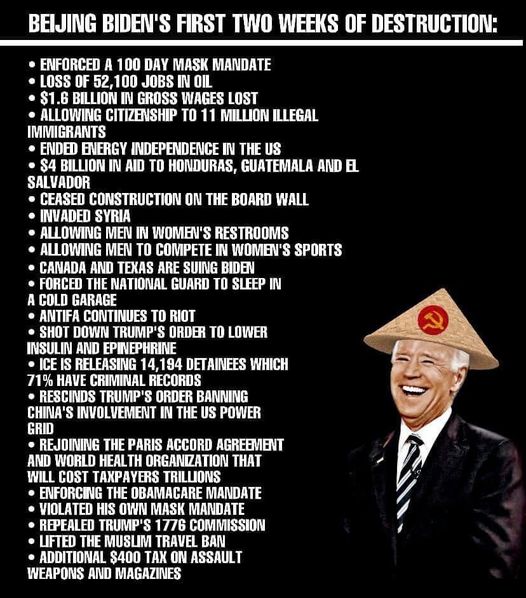 There is Democrat-sponsored legislation pending that would prevent any public building or artifact, even a “bench” from being named after the 45th president of the United States. There is a farcical witch-trial to impeach the same villain even though he has left office and is now a private citizen. There is even Democrat talk of stripping Trump of his pension, despite the fact that he gave his entire $1.6 million salary as president to the American people – something no president before him has done. If ever there was a public lynching, short of stringing the victim from the nearest tree – and there are no lack of leftwing calls for that – the Democrats’ unrelentingly vindictive assault on the defeated Donald Trump down to the last petty detail is it. 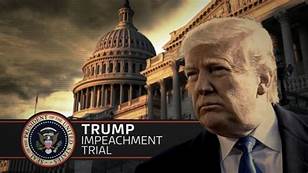 But what is in effect a total war is not merely a war to cancel Donald Trump. If it were, it would be reprehensible enough, but not a threat to the nation itself. 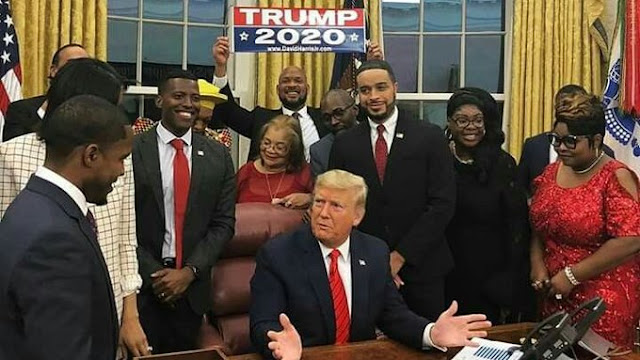 This demonic hate directed by the Democrat Party towards Trump is also hate for the 75 million Americans who voted for him. And there is no shortage of reminders of that. Ordinary Americans in all walks of life who happen to think that Trump’s presidency – which included record employment and record economic growth, delivered benefits for all Americans, particularly American minorities, secured America’s borders, defeated America’s terrorist enemies and led to an unprecedented reconciliation between Arab nations and the State of Israel – Americans who think this is a worthy achievement are treated as social pariahs, have their careers destroyed and (shades of the Kremlin) are regarded as mentally unfit and in need of deprogramming.

In a March 2020 interview with Axios James Clyburn – the third ranking Democrat in the House and the political figure most responsible for Biden’s primary victory – raised the specter of Hitler when speaking about Trump, calling the president a racist and likening modern-day America to Germany during the Nazi Party’s rise to power. “I used to wonder how could the people of Germany allow Hitler to exist,” said Clyburn. “But with each passing day, I’m beginning to understand how. And that’s why I’m trying to sound the alarm.”

A Tsunami of Hate – not “divisiveness” – is the root cause of our political crisis and the most existential threat we have faced since the war to end slavery.

The fact that the threat posed by the Democrats’ Tsunami of Hate is not just to Trump and his supporters, but to America itself, was evident in one of Biden’s first directives as president, declaring that a war on America’s “systemic racism” would be a priority of his administration: “The fact is systemic racism touches every facet of American life.”

This is one of the Big Lies that have become articles of faith for Democrats, and is easily refuted. The 1964 Civil Rights Act outlawed “systemic racism.” Here is the Wikipedia description of the law:

If systemic racism or institutional racism were a serious problem in America – let alone touched “every facet of American life,” – as Biden says, what do you think would happen? Assume, as Biden and woke Democrats generally seem to think, that all white people are racists, there are thousands of black attorneys, attorneys general, prosecutors, judges, legislators and occupiers of the highest seats of government. If there was a scintilla of truth in this statement there would be thousands, maybe hundreds of thousands of lawsuits filed under the Civil Rights Act. But there are no such lawsuits. The claim that “systemic racism touches every facet of American life” is itself a racist lie, whose evident target is white people, since according to the woke, “people of color” can’t be racist.

Not surprisingly, one of Biden’s first week initiatives was a systemically racist plan to provide financial assistance to small businesses whose owners were black, Asian, Hispanic, and Native American. Only whites were excluded. But Asian Americans as an ethnic group have higher incomes than white Americans. So what rationale for this policy is there but anti-white racism?

How virulent is the anti-white and anti-American racism of the Democrat Party? Consider this unhinged but also unchallenged statement by Vice President Kamala Harris defending the Black Lives Matters rioters whose “protests” caused billions in property damage, led to 25 deaths and injured 2000 police officers in the summer of 2020: “The reality is that the life of a black person in America has never been treated as fully human… It’s no wonder people are taking to the streets [to protest]. And I support them.”

In other words, the 44th president of the United States, the “most admired man in America” for over a decade wasn’t treated as “fully human,” or Martin Luther King – the only American with a national holiday in his honor (courtesy of President Ronald Reagan). This lunatic hatred of white America is now not only acceptable in the Democrat Party but the hateful creed of its leaders.

To be fair, there are two main areas of systemic racism in America today, but both are supported and enforced by the Democrat Party, which is why they exist. The first is the systemic racism that traps inner city children – mainly ethnic minorities – in inferior schools that for fifty years and more have failed to provide 80 percent of them with the skills that are necessary to succeed. Every year 40% of inner city children drop out of school without graduating, and 40% of those who do, are functionally illiterate. The Democrat teacher unions – the same which went on strike during the pandemic with full pay at the expense of children who could not afford to miss school – exert absolute control over these school systems and have stifled all attempts at reforms. They are unalterably opposed to every alternative to their racist policies, from charter schools to vouchers that give inner city kids the same privilege as their middle-class counterparts, to allow their parents to enroll them in schools that will teach them.

The other nationwide systemic racism is affirmative action programs which discriminate against all ethnic groups but those designated “oppressed” – a convenient leftist fiction used to justify all manner of injustice. If you’re black or Pacific Islander or Hispanic, go to the head of the line for a job, a promotion, a place at Harvard, a coveted training position to become a surgeon or other medical specialist. If you’re white or an ethnic minority whose community supports educational values and scores well on exams, like Asians, forget that place at Harvard, you’re screwed.

How racist is that? And how readily is this racism supported by a president and an administration, which like our most dedicated foreign enemies thinks America is a nation of slavers and racist oppressors, while at the same time our borders are under siege by black, brown and Asian minorities desperate to become citizens of the most tolerant, inclusive and egalitarian society on earth.

America will not be healed until the Democrat Party returns to its senses, repudiates its current racist attitudes, and stops demonizing its opponents as what Speaker Nancy Pelosi has called “enemies of the state.”