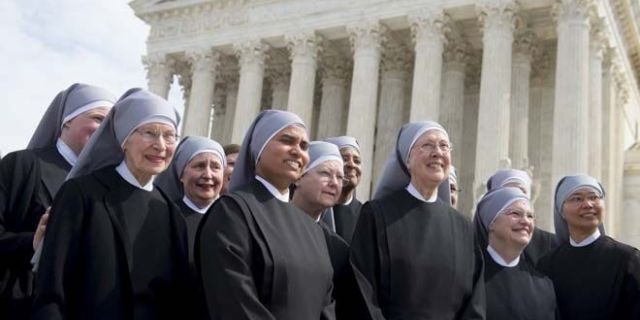 By
Nuns of the Little Sisters of the Poor at the Supreme Court, March 2016. (File photo: Joshua Roberts/Reuters)
The Supreme Court has ruled this morning in favor of the Little Sisters of the Poor, a charitable order of Catholic nuns, deciding once again that the government cannot compel them to subsidize birth control and abortion-inducing drugs, as is required by the Health and Human Services Department’s contraceptive mandate attached to Obamacare.
The seven-justice majority upheld the expanded religious and conscience exemptions established by the Trump administration, enabling employers with moral objections to decline to subsidize these drugs in employees’ insurance coverage. Justice Thomas wrote for the majority, Justice Alito authored a concurring opinion, and Justices Breyer and Kagan authored another. Justices Ginsburg and Sotomayor dissented.
This decision is certainly a gratifying one, especially after having watched for the last decade as government officials — first from the Obama administration and now from progressive state governments — repeatedly dragged religious employers to court for refusing to comply with the mandate. At the very least, it’s clear that the First Amendment protects religious believers from being made complicit in practices that they view as morally wrong.
What’s even more troubling about this particular violation of free exercise, though, is the nature of the policy in question. The contraceptive mandate, remember, never even passed through Congress; it was tacked onto Obamacare after its passage by ideologically motivated, progressive bureaucrats in the HHS Department, then vigorously defended by the Obama White House (including, it should be noted, long-time Catholic Joe Biden, who showed no signs of a troubled conscience as his administration hauled charitable nuns and Catholic universities to court for meekly objecting to underwriting abortifacients).
In short, while it’s all well and good to celebrate a victory on the grounds of the First Amendment and religious freedom, we should keep in mind that the substance of this policy is a mistake, even on its own terms and even for the non-religious. No one, from the Obama-administration officials who promulgated it to the pro-abortion-rights feminists tearing out their hair over this decision, has once articulated a satisfactory reason for why anyone — let alone Catholic nuns or Christian business owners — must be conscripted into funding an employee’s birth control.
The belief that the government, or employers compelled by the government, ought to subsidize contraception stems from a fundamentally incorrect, irrational view of contraception as a necessary component of holistic health care. On this view, a properly functioning female reproductive system is diseased and pregnancy is a disease to be prevented. This is simply untrue, whether or not one adheres to any particular faith tradition. One very well might like to have birth-control drugs for one reason or another, but when used for contraceptive purposes rather than medical ones, it is not health care by any reasonable definition of the term; it prevents no disease and cures no malady. The mandate was, on its face, an effort to subsidize birth control — but it was first and foremost an effort to conscript the entire nation into validating a disordered view of the human body and of sexuality.
Notwithstanding the intentionally divisive claim from radical progressives that conservatives are angling to remove all access to birth control, no one is advocating returning to pre-Griswold America. But it shouldn’t be difficult to comprehend why there exists no right to government-mandated, employer-subsidized, “free” contraception — and certainly no right strong enough to coerce others to pay for it. We shouldn’t let the accurate argument in favor of First Amendment protections distract us from the fact that this policy is rotten, religious beliefs aside.
ALEXANDRA DESANCTIS is a staff writer for National Review and a visiting fellow at the Ethics and Public Policy Center. @xan_desanctis
https://www.nationalreview.com/corner/another-victory-for-the-little-sisters-of-the-poor/
______________
RELATED ARTICLES
To the Left, ‘Fair’ Means Forcing Nuns to Buy Abortion Pills
By DAVID HARSANYI | National  | National Review 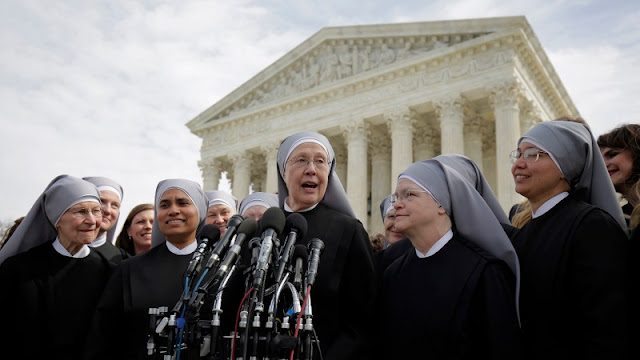 Sister Loraine McGuire with Little Sisters of the Poor speaks to the media in Washington, D.C., March 23, 2016. (Joshua Roberts/Reuters
The Bill of Rights be damned.
The other day, in a virtual rally called “Fight Back for Fair Courts,” longtime Obama aide Dan Pfeiffer conceded that “the Supreme Court is the greatest obstacle to progressive policies in America.”
It’s been clear for some time that the Constitution — as written — is incompatible with a progressive agenda. This is the reality that drives the hysterics over Federalist Society–endorsed judicial appointments, over the Electoral College, and over other counter-majoritarian institutions. It’s why Pfeiffer and others advocate expanding, really neutering, the Supreme Court. It’s why a growing number of left-wingers argue that the Senate is a fundamentally unfair institution.
Constitutional restrictions on centralized power are a core problem for progressives. So is the Bill of Rights, which protects due process, open discourse, and the right to self-defense — all of which are now regarded as old-fashioned.
This week, two decisions by the court upheld religious liberty and conscience rights against incursions by the state. Both decisions represent modest victories, attained with liberal help. One ruling held that the ministerial exception to employment law (which allows religious organizations to choose who their own ministers are without being sued) applies also to teachers at religious schools who are responsible for religious education. In the other case, the court upheld the right of Americans not to participate in mandatory contraception coverage under Obamacare’s employer mandate.
For years, left-wing pundits mocked conservatives who maintained that Obamacare’s employer mandates abridged basic religious freedom — laughing as if this idea was the silliest, most fraudulent thing they’d ever heard. In a 2012 editorial, the New York Times scoffed at the “phony crisis over ‘religious liberty’ engendered by the right” and praised President Obama for standing his ground on “an essential principle — free access to birth control for any woman.” At some point in the ideological evolution of the American Left, “free access” to abortifacients was transformed into an “essential principle” of American life while the concept of religious liberty was consigned to existence between quotation marks.
Both cases ended up 7–2.
CLICK HERE TO READ THE REST OF THIS ARTICLE.
_____________________
Court rulings keep Trump’s financial records private for now
WASHINGTON (AP) — The Supreme Court issued a mixed verdict Thursday on demands for President Donald Trump’s financial records that will keep his tax returns, banking and other documents out of the public eye for the time being.
CLICK HERE TO READ THE REST OF THIS ARTICLE.

“Cast Down Your Bucket Where You Are” – Booker T. Washington 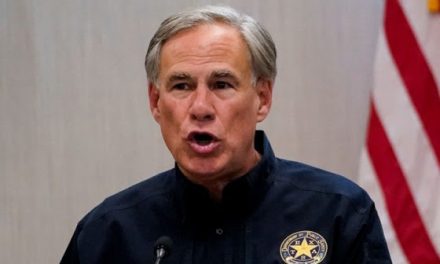