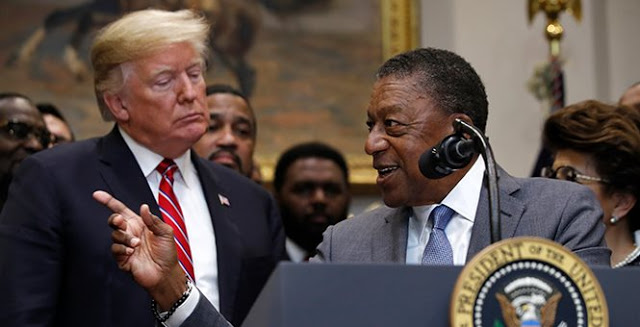 By
Source: AP Photo/Jacquelyn Martin
The founder of cable network BET says the 2020 election is Trump’s to lose and advised Democrats to rethink their approach to President Trump.
BET founder Robert Johnson told CNBC in an interview, “I think the president has always been in a position where it’s his to lose, based on his bringing a sort of disruptive force into what would be called political norms. I don’t care whether it’s his way he conducts foreign policy, the way he takes on the government agencies and what they do with immigration. He brings his style.”
Johnson went on to criticize Democrats for attacking Trump on style over substance. “Now, a lot of people, particularly those who voted for him and those who will vote for him again in the next election, like that style,” Johnson said. “I think what the Democrats have to do is to be careful not to get caught up in stylistic Trump and more on substantive Trump.”
When the media targets Trump supporters, said Johnson, they only add to the president’s support.
“His ability to dominate the news cycle and get the narrative going about what he said has, to me, sort of a double effect on the Democrats. One, they get all agitated about what he said, and then they go beyond just him. They extend it to his voters, and the voters say “wait a minute. I voted for this guy. I like what he’s doing. You know, why are you picking on me, saying ‘I’m not smart enough;’ ‘I’m sort of a cult?’”
In 2013, Johnson made headlines when the entrepreneur took issue with the stubbornly high black unemployment rate during the Obama administration.
“This country would never tolerate white unemployment at 14 and 15 percent. No one would ever stay in office at 14 or 15 percent unemployment in this nation, but we’ve had that double unemployment for over 50 years.” Johnson lamented in 2013.
The black unemployment peaked at 19.3 percent in Mar. 2010.
Johnson said in 2013 that the challenge was to figure out why the black unemployment rate was so high, warning “if that doesn’t change, somebody’s going to have to pay – 34 million African-Americans are not going to leave the country, millions of African-Americans who don’t have jobs.”
For many blacks, the solution appears to be Donald Trump. Current jobs numbers indicate the black unemployment is the lowest it’s ever been since the government began tracking the figure in the early 1970s.
Two recent polls, one conducted by Emerson and the other by Rasmussen, both found around 34 percent of likely black voters support President Trump. If accurate, that’s a big improvement from 2016 when only eight  percent of African Americans voted for Trump.
Even the president’s critics concede Trump’s efforts to attract black Americans could spell disaster for the Democratic Party.
“It’s an incredibly emotive election cycle, isn’t it,” Johnson was asked during Friday’s interview?
“It is, and so what you do is you simply add to his support by trying to make a case that, ‘gee, if Trump is bad and you support Trump, then you got to be bad,’ which is a really silly way to talk to the American people,” Johnson said.
Will the media heed Johnson’s advice? Probably not.
https://townhall.com/tipsheet/bronsonstocking/2019/11/29/bet-founder-says-2020-election-is-trumps-to-lose-says-dems-should-change-strate-n2557235?utm_source=thdailypm&utm_medium=email&utm_campaign=nl_pm&newsletterad=&bcid=1b87ed489cb499e9d52de389e64c7f01&recip=19399969