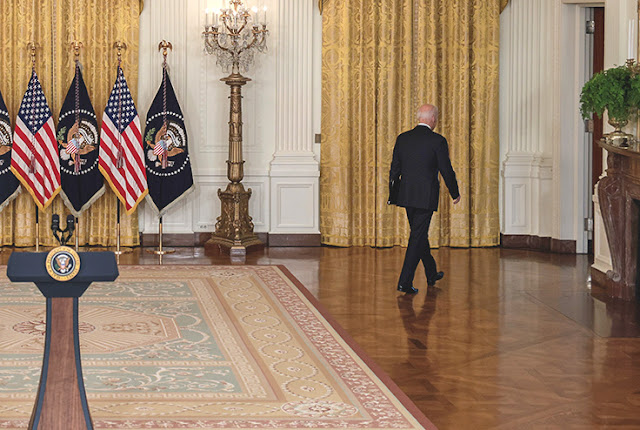 In just a few months Joe Biden has wrought a series of disasters that will invoke outrage that dwarfs the concocted anger directed at Donald Trump.

As Joe Biden entered office in January 2021, there still roared a left-wing revolution, a woke madness spreading through popular culture and Congress, much of which he indirectly has aided and abetted. It has redefined not just politics but the rules of the presidency. And the eventual casualty of these radical shifts in protocols and customs will be—Joe Biden.

Take impeachment, which heretofore had been rare and has still never led to a Senate conviction. Prior to Trump, Andrew Johnson and Bill Clinton were the only presidents to have been impeached (Richard Nixon resigned to avoid it), and both were acquitted in the Senate.

Yet leftist congressional representatives introduced articles of impeachment the very first week Trump was in office, on the absurd allegation of profiting from his office (the presidency cost the Trump corporations hundreds of millions). The House later went on to impeach him twice, without writs of “treason” and “bribery” or even “high crimes and misdemeanors” as set out by the Constitution. Instead, Trump was, first, successfully impeached for supposedly abusing his power and obstructing Congress. I don’t think the average American has ever been pulled over by the police for the high crime “of obstructing Congress” (historically a presidential pastime) or has been charged with “abuse of power” (said of every president from Thomas Jefferson to Barack Obama).

Trump’s second impeachment was even flimsier. He was accused of “incitement of insurrection” concerning disturbances on January 6 that supposedly led to the violent death of Officer Brian Sicknick, the fatal shooting of an unarmed Ashli Babbitt, and the entire fable of an “armed insurrection.” Post-impeachment, we would learn that Sicknick died of natural causes. Strangely, for months no information about the shooter of Ashli Babbitt or the inquiry into that fatal act was ever fully released to the public. No one was charged with armed insurrection, largely because none of the buffoonish rioters were found either to have carried or used a firearm that day or were exposed as master plotters with plans to destroy the U.S. government. They may well have been guilty of felonies, but armed insurrectionary conspiracy was not one of them.

No matter, the precedent had been set that serial impeachments now will be normative when a president in his first term loses party control of the House. Charges may not follow constitutional definitions. There will be no need to appoint a special counsel, to build a case on evidence, or to hold a formal hearing where witnesses present testimonies and are subject to cross-examination. There will be no expectation that the Senate will even come close to convicting an impeached president. Impeachment is simply now a political gambit to embarrass a party or a president before a reelection. Biden and future presidents as private citizens could be hounded after exiting office with a Senate impeachment trial.

Joe Biden by such new standards would then be in jeopardy should the Democrats lose the House in 2022, on the precedent that the Republicans could bring up anything they wished—unwillingness to enforce existing federal immigration law, deliberately misleading the American public on the growing catastrophe in Afghanistan, leveraging a foreign leader to lie with threats of withholding U.S. airpower to enhance his own political agenda, or empowerment of and collusion with his son Hunter Biden in past efforts to massage foreign governments for cash on the expectation of future advantageous U.S. government treatment. These may be flimsy charges for traditional impeachment; they are certainly not under the new Democratic model.

When Donald Trump’s confidential phone calls with foreign leaders were leaked to the press it was celebrated by the media and the Left as a sort of blood sport. Now are we to think the same of the embarrassing leaked phone call between Biden and the Afghan president?

Donald Trump was impeached over a phone call with the Ukrainian president for supposedly pressuring Ukraine, by the threat of holding up foreign aid, to conduct an investigation of the Biden family syndicate’s shenanigans. So, what are we to make then of Biden’s demand that the Afghan president lie to the world so that his fragile government did not appear in jeopardy, even if, Biden acknowledged, it, of course, was—with the added insinuation that Biden’s commitment to support the Afghan government with U.S. military power was predicated on his compliance with parroting such lies?

We saw from 2017 to 2021 the precedent that both active and retired top Pentagon brass would either leak derogatory assessments of the commander-in-chief to the press, or overtly declare him to be morally unfit to hold office—all in violation of the Uniform Code of Military Justice. What then is the country to do, amid the Afghanistan catastrophe, when lots of retired generals are now going public with calls for their president’s key military and civilian office holders to resign for culpability for a series of foreign policy disasters? Is it a good thing for our generals and admirals to become editorialists and critics of an elected president’s administration or ill-conceived, both, neither—or sometimes, depending on who is president?

In the Trump years, the Left institutionalized the new idea that threatening to invoke the 25th Amendment was a casual affair, a strategy appropriate to harming or removing a president. So the acting heads of the FBI and Justice Department apparently discussed plots to wear eavesdropping equipment to entrap Trump in recorded conversations that might reveal his alleged dementia. An Ivy League psychiatrist was called to Congress to swear that the president was non compos mentis and in need of a forced intervention. The media demanded proof of Trump’s sanity to the point he took—and aced—the Montreal Cognitive Assessment.

Joe Biden is obviously suffering from some sort of organic illness that has reduced his mental faculties to the point he is often dazed. When he is rarely able to craft complete sentences, he says things that are incoherent, offensive, and occasionally racist. He seems to have no knowledge of current events and so reassures trapped Americans in Kabul that they can simply go to the besieged airport, show their passports, and waltz on in.

Under the new protocols, are we to expect high Justice Department officials to record stealthily Biden’s private conversations, to subpoena an appropriate Ivy League psychiatrist, or to ask the president to take a simple cognitive assessment test?

Under Joe Biden, the Chairman of the Joint Chiefs of Staff, General Mark Milley, sought to ingratiate himself to the woke movement, to his woke Secretary of Defense, and to Joe Biden by assuring Congress he would get to the root of “white rage” and in general recommend to his troops the relevant woke texts such as those of Professor Ibram X. Kendi.

Milley produced no evidence that there were lots of insurrectionary white supremacists in the military. He cared little in his virtue signaling that “white” male soldiers had died in Iraq and Afghanistan at twice their numbers in the general population—a cardinal sin under woke disparate impact and proportional representation canons.

Again, fine. But given the sometimes violent nature of Black Lives Matter, and its apparently proud Marxist origins, is it now equally OK for some future chairman to testify that he will go through the ranks to understand black rage as his Pentagon roots out would-be BLM extremists?

These hypocrisies are endless, given the pernicious precedents that so casually have now been embraced for cheap political advantage.

Will the next Speaker of the House ritually tear up Biden’s State of the Union address, as he hands the text to him on national television?

Will the Congress appoint a special counsel, allot him 22 months and $40 million to scour the Biden team to find the causes, origins, and those culpable of the greatest foreign policy debacle since the last days of Vietnam—with occasional side trips along the tortured family money trail and indifference to the IRS of Hunter Biden’s international grifting?

Will retired Trump-era CIA and high-ranking intelligence officials go on cable television to wink and nod about their privileged security clearance information to accuse Biden of treasonous behavior?

Will they tweet that he and his policies are similar to those of the German death camps, or stamp him as Mussolini or Hitler-like?

And will some “brave” disillusioned Democratic “loyalist” be canonized in the media as he falsely reassures the nation, as “Anonymous II,” that he is both high-ranking and representative of a large, dissident, and grassroots resistance to Biden within his own administration and party? Will the New York Times print his warning that an army of idealists is ready and willing to resist any Biden presidential order that it finds distasteful? Is that the political culture that Biden should now operate under?

Did the NATO allies find Trump’s brashness—which resulted in a considerable increase in alliance military funding and readiness—as bad as Biden’s soothing words that betrayed our European partners and have all but ruined the alliance?

Was all this hypocrisy predicated on the idea that the Left will never lose power, or that its atrocious behavior was defensible for the moment given the accident of Donald Trump? Or do Democrats really believe there must be one standard for leftist moralists and another for their supposed inferiors, on their blinkered assumption that there would never be a Democratic president as controversial and disliked by the Right as Donald Trump was by the Left?

The truth is that in just a few months Joe Biden has wrought a series of disasters that will invoke outrage that dwarfs the concocted anger directed at Donald Trump. And it may be vented through the very protocols that the Left invented for its own short-term advantage.

State Of Emergency Declared In Washington State Over Coronavirus