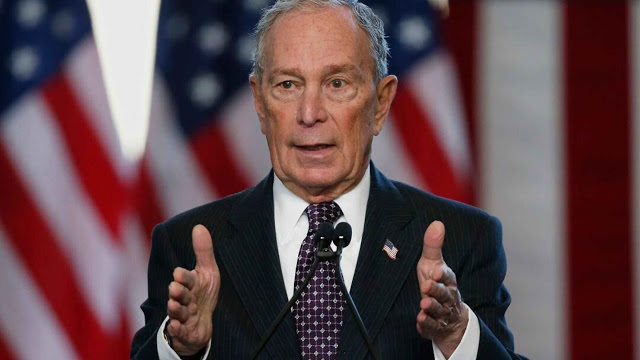 By
Democratic presidential candidate Michael Bloomberg speaks at the Greenwood Cultural Center in Tulsa, Okla., Sunday, Jan. 19, 2020. (AP Photo/Sue Ogrocki)
Video from 2011 surfaces of Bloomberg saying, ‘many black and Latino males don’t know how to behave in the workplace.’
BLOOMBERG’S LONG RECORD OF VULGAR COMMENTS HAUNTING PRESIDENTIAL BID
BLOOMBERG IMPLIED FARMING DOESN’T TAKE INTELLIGENCE IN 2016 COMMENTS
Will past remarks become a liability for 2020 hopeful Mike Bloomberg?
Michael Bloomberg will be on the debate stage Wednesday night in Las Vegas, and he made it just under the wire.
The former New York City mayor and 2020 presidential candidate qualified for the Nevada Democratic presidential primary debate at the last minute, notching 19 percent support in a Marist, Newshour and NPR/PBS poll, the fourth national poll to put him above the 10 percent mark since Jan. 15. That means the billionaire, who has spent more than $400 million of his fortune on advertising, meets the polling threshold set by the DNC for the debate.
Bloomberg will be on the debate stage, his campaign confirmed in a statement.
“Our campaign is seeing a groundswell of support across the country, and qualifying for the February 19 debate is the latest sign that Mike’s plan and ability to defeat Donald Trump is resonating with more and more Americans,” campaign manager Kevin Sheekey said Tuesday morning. “Mike is looking forward to joining the other Democratic candidates on stage and making the case for why he’s the best candidate to defeat Donald Trump and unite the country. The opportunity to discuss his workable and achievable plans for the challenges facing this country is an important part of the campaign process.”
Bloomberg is skipping the first four primary states — Iowa, New Hampshire, Nevada and South Carolina — to focus on saturating Super Tuesday states with ads and to campaign in the 14 states that will vote on that day while other candidates are grinding it out in the early states. This strategy has allowed him to pass other candidates in national polls despite their strong showings in Iowa and New Hampshire.
This will be the first time Bloomberg will appear in a debate after entering the presidential race in November.
Previously, one of the criteria for candidates to get on the debate stage was their number of donors, but the DNC changed those rules for the Nevada debate in late January, opening the door for Bloomberg to make the stage. That decision drew criticism from his Democratic competitors, who have previously characterized Bloomberg as trying to “buy” the presidency.
“The DNC didn’t change the rules to ensure good, diverse candidates could remain on the debate stage. They shouldn’t change the rules to let a billionaire on. Billionaires shouldn’t be allowed to play by different rules—on the debate stage, in our democracy, or in our government,” Sen. Elizabeth Warren of Massachusetts tweeted at the time.
The fact Bloomberg didn’t appear at the most recent debates previously drew ridicule from President Trump.
“Mini Mike Bloomberg doesn’t get on the Democrat Debate Stage because he doesn’t want to – he is a terrible debater and speaker. If he did, he would go down in the polls even more (if that is possible!),” Trump tweeted last month.
But instead of sinking in the polls, Bloomberg has seen his presidential stock quickly rise, jumping from 4 percent in the Dec. 2019 Marist, Newshour and PBS/NPR poll to 19 percent in the one released Tuesday. He only trails Sanders in Tuesday’s poll, who has 31 percent, with former Vice President Joe Biden and Warren the only other candidates in double-digits.
The higher poll numbers have led to increased scrutiny on the billionaire New Yorker, who has seen his previous comments about women, minorities, blue-collar workers and more come back to be used as ammunition by his Democratic competitors and many on the right.
The other candidates who have qualified for Wednesday’s debate are former South Bend, Ind., Mayor Pete Buttigieg, Biden, Sanders, Warren, and Sen. Amy Klobuchar of Minnesota.
Candidates could also qualify by earning at least one pledged delegate from Iowa or New Hampshire, or receiving 12 percent support in two polls from Nevada or South Carolina.
https://www.foxnews.com/politics/bloomberg-qualifies-for-las-vegas-debate-with-last-second-poll

Rev. John Witherspoon-Signer of the Declaration of Independence