CNN’s recent settlement with Covington Catholic High School student Nicholas Sandmann for the channel’s biased reporting of the student’s encounter with left-wing agitators at the Lincoln Memorial a year ago is a result of “partisan blindness.” This bias not only affects the network and its parent company – AT&T – but other corporations as well.

In a commentary published on the website of The Federalist, Free Enterprise Project Program Coordinator Scott Shepard explains that the “dangers of closed viewpoints and political partisanship are becoming costly realities for American corporations.” And it’s also a clear and present danger to their investors.

That’s because, despite these “costly realities” such as the Sandmann settlement, corporate America is largely unwilling to work to try to shield themselves from being afflicted by the risk of groupthink.

Using the example of FEP’s attempts to constructively interact with AT&T, Scott describes “the aggressive resistance we at FEP encounter when asking these corporations to protect their employees from workplace discrimination on the basis of their civic viewpoints or participation.”

Scott notes that AT&T is resisting FEP’s shareholder proposal to go before other investors for true board diversity – a diversity of thought, rather than superficialities such as race and gender – to help generate more productive discussion and strategic decision-making in company c-suites:

This fall, we at the Free Enterprise Project (FEP) of the National Center for Public Policy Research asked AT&T to allow its shareholders to vote about whether they would like AT&T to provide them reasonable information about the ideological perspectives (which we further defined as the political/policy positions) of its board of director candidates, on which shareholders vote each year. In response, AT&T went to the U.S. Securities and Exchange Commission (SEC) to try to block our proposal from going to shareholders.

AT&T told the SEC that it just couldn’t figure out what we were talking about, or how to report on it. Noting that political positions can be divvied up more finely than just liberal versus conservative, it complained that providing meaningful information, while allowing for nuance, would tax their information-conveying powers past the breaking point. This from a telecommunications company that owns a purported news station.

Yet a simple perusal of the biographies of the AT&T board indicates an inherent political bias that could skew important conversations about the management of the company:

AT&T’s claim is absurd on its face, and the reason for it is clear. From the biographical information that AT&T does provide about its current board members (who are also the corporation’s slate of board candidates for next year), we have concluded that every member of the board who reveals his or her political activities has served only in Democratic administrations and for Democrats.

And this is hardly a lone example of one viewpoint dominating a company’s leadership. A similar, broader look at the problem reveals that corporate leadership these days often skews to the left:

AT&T is hardly alone in this arguably self-destructive high-level partisanship. As Baron Political Affairs, LLC revealed in 2019, every single director of a Fortune 1-10 company who has been elected or has worked for an administration has been (or worked for) a Democrat. The ratio shifts to two Democrats for every Republican in the Fortune 100 generally, and to 5:1 for financial or tech firms within that group.

To read all of Scott’s commentary – “Covington Settlement  Warns Corporations that Bias Can Cost Big Bucks” – at The Federalist, click here. 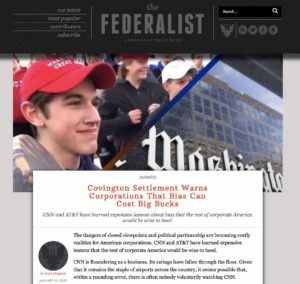 Keeping Africa On the Brink of Starvation

Why Are Democrats Trying to Foment More Violence?