Canada’s Princess Justin Trudeau skipped the firehoses and went straight to trampling peaceful protestors with horses, including an elderly woman with a walker. Other protestors moved in to help the two people trampled but were pushed back by police officers with batons and wearing riot gear.

Another police officer reportedly beat a trucker with the butt of a rifle.

Police, some armed with semi-automatic rifles, have begun arresting some of the entirely peaceful protesters. Roughly 100 people were arrested on Friday, many of whom had linked their arms and were singing “O Canada,” their national anthem. Some were thrown to the ground and had their hands zip-tied behind them.

Here is the woman who was trampled by Trudeau’s stormtroopers: 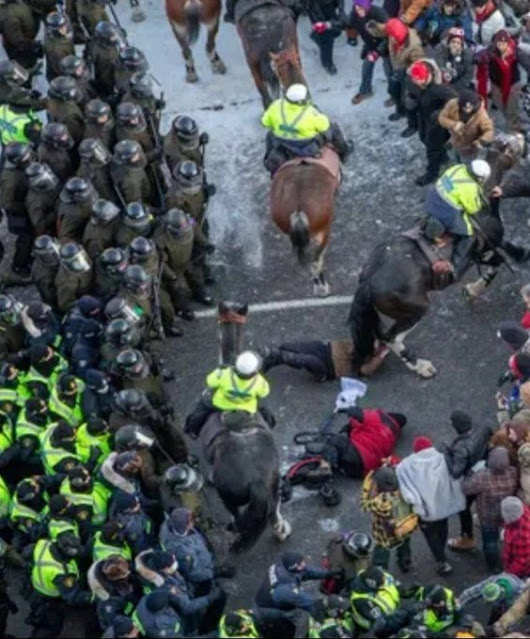 Trudeau, who took a knee for Black Lives Matter, invoked the Emergencies Act a few days ago to deal with the convivial Canadians protesting against COVID-19 mandates, stating it would give the police “more tools” to deal with the demonstrators. Apparently, by “tools,” he meant horses with which to trample his own people. Trudeau spoke of the threat of violence from the large group of demonstrators, but there was none until his Stasi showed up.

Trudeau has also threatened to seize the bank accounts of people protesting in Ottawa, the nation’s capital. Cops set up roughly 100 checkpoints to keep people from joining the protestors already there.

The Ottawa Freedom Convoy protestors have been more than peaceful, they’ve been playful, setting up bounce houses for the kids and even a hot tub for adults, as well as playing hockey and BBQing.

The police-led violence comes as no surprise. Police around the world have used violence to quell protests from people tired of COVID-related oppression. Australian police were even videotaped choking one young girl and pepper-spraying another. 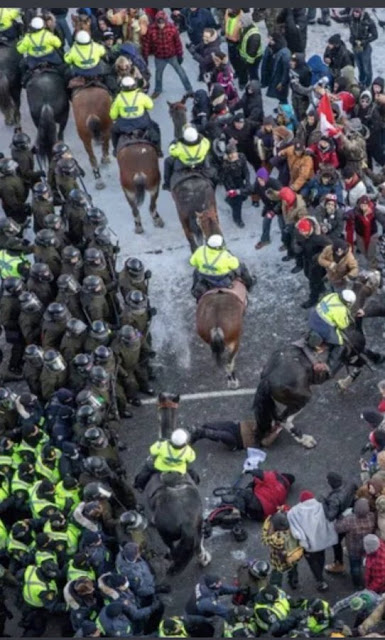 “Never in my life would I have believed anyone if they told me that our own P.M. would refuse dialogue and choose violence against peaceful protesters instead.”

We’ve been covering the horrific choices that Canadian Prime Minister Justin Trudeau has made in dealing with the peaceful #FreedomTrucker protests against dehumanizing government covid mandates and measures.

His embrace of fascism to counter a peaceful protest borders on the lunatic. From seizing bank accounts, even pets, to sending police in to act as his personal violent goon squads, Trudeau is a complete disgrace.

Reports of people being trampled by mounted police, vehicle windows being smashed by armed police, and police beating protesters in the streets are streaming out of Ottawa and shocking the free world.

The images and video coming out of Canada are horrifying.

Canadian police officers advanced on trucks sometimes at gunpoint, smashing truck windows and arresting protesters in front of the country’s Parliament building, an aggressive escalation in the government’s effort to finally end the protests that have roiled the nation’s capital for three weeks.

Officers in riot gear, brandishing batons and rifles, pushed to regain the area around Parliament, expanding an operation that began on Friday to remove parked trucks that have blocked the city’s downtown core.

In the heart of the encampment, the police pushed people back with batons, and toppled over a table displaying dubious information about vaccine injury. They advanced methodically truck by truck, shoving protesters back, some people getting pushed over by the police, as demonstrators shouted, “Shame on you!”

. . . . The protests had been by and large nonviolent, evoking the atmosphere of a carnival. But they ensnarled traffic across the capital, disrupted business and annoyed residents with incessant honking. Organizers inflated bouncy castles in the street, and people brought small children and dogs. D.J.s spun music from flatbed trucks-turned stages. At one point people soaked in a hot tub erected in front of the Parliament building.

. . . . “It’s horrific,” said Dagny Pawlak, a spokeswoman for the truckers, said in a text message on Saturday. “A dark moment in Canadian history.” She added: “Never in my life would I have believed anyone if they told me that our own P.M. would refuse dialogue and choose violence against peaceful protesters instead.”

. . . . On Friday, B.J. Dichter, a spokesman for the convoy, wrote on Twitter that it was time for protesters to leave, saying that the police had smashed the windows of one driver’s truck. But some of those who remained near the Parliament building said they had no plans to go home yet, even as law enforcement closed in.

“We can’t stop them,” said Mike Marsh, 48, nodding in the direction of the police. “All we can do is slow them down.” 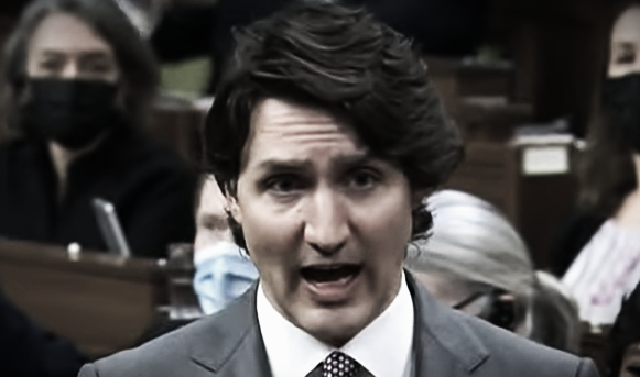 Canadians are proud of our nation as a free and democratic place. Trudeau’s attack on Canada’s foundation of freedom and democracy is generating a significant backlash.

A new poll by Mainstreet Research shows a growing backlash against Justin Trudeau and the Liberals following their decision to inflame tensions, refuse to meet with protestors, and invoke the Emergencies Act.

Last month, the Liberals and Conservatives were tied in the polls.

When combining the Liberal & NDP votes, 46% of Canadians said they were voting for ‘progressive’ parties (assuming the Liberals can be called progressive at all), while the CPC & PPC combined were at 42%.

But now, the latest Mainstreet Research survey – conducted between February 16-17 (thus taking place after the Liberals imposed the Emergencies Act) – shows the situation has changed dramatically, and Canada has moved to the right.

The Liberals are up 2 points, now at 31%. But the backlash against the Emergencies Act has consolidated support for the Conservatives, who are up 10 points to 39%.

Since replacing Erin O’Toole with Candice Bergen – who is taking a hardline in terms of opposing restrictions & mandates – and who publicly supported the Truckers, the CPC now leads the Liberals by 8 points.

The NDP appears to be paying a price for their support of the Emergencies Act (something they can still reverse), as they have fallen to 15%.

Now, here’s where it gets interesting.

A nation moving to the right

Now, the combined right-wing vote is 45%, while the left-wing vote has stayed stagnant at 46%.

The nation is now split right down the middle between right & left, which would be a surprise to the many establishment pundits who constantly claim Canada is a progressive-dominated country.

The results are even more dramatic when we consider the change since the election to now.

The combined Liberal-NDP vote on election day was 51%, while the combined CPC-PPC vote was 39%. At the time, the CPC wasn’t even fully against restrictions as they are now.

Since then, the left is down 6 points, and the right is up 6 points, a net swing of 12 points.

The Bloc is a mix of different aspects of the political spectrum, often left-wing on many economic measures, while being nationalistic and in favour of the devolution of power from the federal government to provincial jurisdictions.

Notably, they have announced that they oppose the Emergencies Act.

Combined, the CPC, PPC, and Bloc now comprise 51% of the country, a majority.

When looking at other aspects of the poll, this makes sense.

Liberals trail among all groups except triple-vaxxed Canadians

Among Canadians who have one dose of a vaccine, the Liberals trail the Conservatives by 23 points.

Among Canadians who have two doses of a vaccine, the Liberals trail the Conservatives by 36 points.

Among Canadians who have not been vaccinated, the Liberals trail the Conservatives by 54 points.

The Liberals lead only among Canadians who have received two doses, and a booster shot, where they lead the Conservatives by 16 points.

It’s notable that even in the one group among which the Liberals lead, they have the smallest lead.

Justin Trudeau has repeatedly made the false claim that ‘Canadians are united’. When he says that, he is attempting to claim that 90% of Canadians having at least one dose of a vaccine somehow equals support for his actions.

Yet, as we saw above, the Liberals trail among Canadians with one dose, and two doses.

And when it comes to the Emergencies Act, Canadians are heavily divided.

Among those who feel the strongest about it, opposition slightly outstrips support.

39% strongly oppose the government invoking the Emergencies Act, while 38% strongly support it.

Among those with more muted feelings, 13% somewhat support it, and 5% somewhat oppose it.

There is a huge gender gap on the question, with 53% of men opposing the act, while 59% of women support it.

As we’ve seen in recent days, the government and establishment media has attempted to make people think that the protests have been nothing but a foreign funded extremist movement.

Yet, the actual facts show otherwise.

According to the Mainstreet Research survey, 30% of Canadians strongly support the truckers protests, while 13% somewhat support it. 41% strongly oppose it, while 11% somewhat oppose it. 5% say they aren’t sure of their opinion.

43% of the country supporting the protests means many millions of Canadians support it, completely countering the narrative being pushed by the Trudeau government.

It also means that the attempts by the Liberal government to demonize the protests are actually an attempt to demonize all those who disagree with the Trudeau Liberals.

And as noted in previous surveys, a majority of Canadians between the age of 18-34 support the truckers protests, showing a significant political realignment among young Canadians as they increasingly identify with right-wing sentiment and opposition to restrictions.

Following the protests, there are far fewer restrictions in Canadian provinces than there were before.

Restrictions are being lifted in many parts of the country, and nearly every provincial government has either ended restrictions, or laid out a timetable for ending restrictions relatively soon.

The only level of government that has really opposed lifting restrictions has been Justin Trudeau and the Liberals.

Not only did they fail to remove restrictions, but they talked about imposing an interprovincial vaccine mandate on truckers, in what was obviously an attempt to further inflame and escalate the situation.

So, where do Canadians stand on this?

55% say it is time to end restrictions, compared to just 36% who want restrictions to remain in place.

This explains why the Conservatives are surging.

The Liberals have taken a few points from the NDP, consolidating the authoritarian left. But the Conservatives have surged, as the backlash against Trudeau’s refusal to lift restrictions, and his imposition of authoritarian power grows.

This is what a backlash looks like. Canadians looked around and saw the CPC opposing Trudeau’s authoritarian power-grab, and support for the CPC surged.

That’s why all of us who value freedom need to keep speaking out against what Justin Trudeau is doing.

His actions are deeply anti-Canadian, and completely antithetical to our nation’s heritage of freedom.

With the backlash against Trudeau growing, advocating for our rights & freedoms in a positive and peaceful way is the path forward to preserving our country. 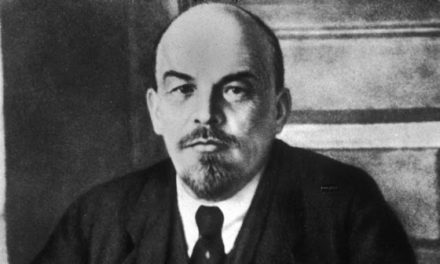 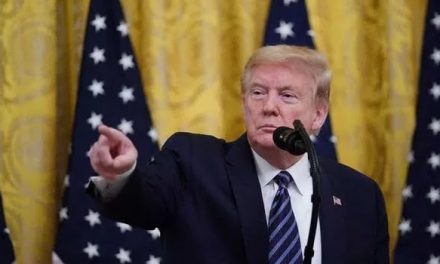