By
Source: (AP Photo/Susan Walsh)
Joined by Israeli Prime Minister Benjamin Netanyahu at the White House Tuesday afternoon, President Donald Trump announced a new Middle East peace plan between the Israelis and the Palestinians.
“This vision for peace is fundamentally different from past proposals,” Trump said. “Complex problems require nuances, fact based remedies.”
“I was not elected to do small things or shy away from big problems,” he said. 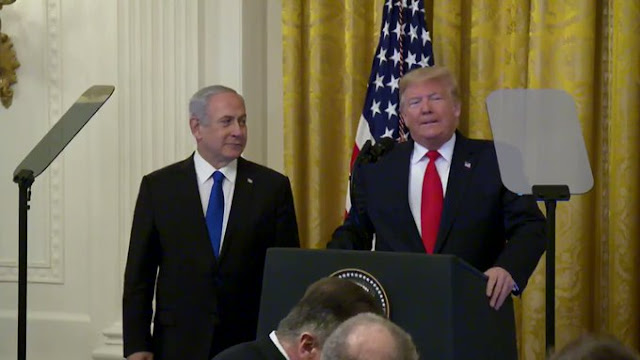 The plan is 80-pages long and according to Trump, is the most comprehensive and detailed ever put forward by the United States. It has been endorsed by Netanyahu and his political opponent, Benny Gantz. Both met with Trump yesterday to go over final details. 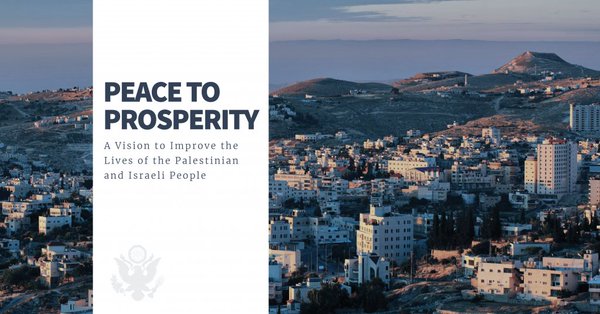 Peace to Prosperity | The White House
President Trump’s vision for peace between Israel and the Palestinians is a realistic path to prosperity, security, and dignity for all involved.
“Mr. Prime Minister thank you for having the courage to take this bold step forward,” Trump said. “We are not here to lecture—we are not here to tell other people how to live, what to do, who to be, or how to worship.  Instead, we are here to offer partnership – based on shared interests and values – to pursue a better future for us all.”
The plan puts a freeze on Israeli settlements for four years, gives Israel sovereignty over the Golan Heights and the Jordan Valley and keeps holy sites in Jerusalem under Israeli security control. The Palestinians, when they meet a list of standards, will be given additional sovereignty of double the territory they occupy now and will see a tunnel connecting Gaza and the West Bank.
Senior White House advisor Jared Kushner, who worked extensively on the plan, was in attendance along with Secretary of State Mike Pompeo, U.S. Ambassador to Israel David Friedman, Treasury Secretary Steven Mnuchin and former Senator Joe Lieberman. Ambassadors from Oman, the UAE and Bahrain were also in attendance.
“We are asking the Palestinians to meet the challenge of peaceful coexistence,” Trump said, issuing a list of conditions for statehood. “We will also work to create a contiguous territory within the future Palestinian state for when the conditions for statehood are met, including the firm rejection of terrorism.”
Palestinian leader Mahmoud Abbas is responding to the plan, which he refused to participate in or negotiate, by meeting with terrorist organizations Hamas and Islamic Jihad. As the deal was announced, the U.S. Embassy in Jerusalem issued a security notice.
https://townhall.com/tipsheet/katiepavlich/2020/01/28/middle-east-peace-deal-n2560240?utm_source=thdailypm&utm_medium=email&utm_campaign=nl_pm&newsletterad=&bcid=1b87ed489cb499e9d52de389e64c7f01&recip=19399969

Pastors in Politics during Revolution: Hugh Williamson & other preachers

Joe Walsh calls Trump ‘traitor’ to US, says ‘no way’ he’ll vote for his reelection