Several city and local governments, as well as the state of Rhode Island, are suing energy companies because of alleged future damage due to climate change.

National Center Senior Fellow Horace Cooper calls this a “jackpot justice” scheme. In a commentary published by Issues and Insights, he notes this legal strategy is bound to fail where it hasn’t already faltered:

If anything, the mayors of Oakland, New York, San Diego, and others are seeking pots of Fool’s Gold. These greedy politicians should stop abusing the legal system, wasting taxpayer dollars and put a halt to their fantasy gold-digging.

Horace notes that many of the cities that are suing are “financial train wrecks” captivated by the “powerful allure” of a court-ordered payment from the wealthy American energy sector. But their dream of being able to “offset their mismanagement” with a hefty ruling has “fogged their judgment” and prompted officials to fight a losing battle while “speaking out of both sides of their mouths.”

For one thing, these governments are trying to sue in venues where they have no real standing. Previous cases have failed at the federal level, leading “plaintiffs [to] believe they have a better chance of success in lower, state courts.”

But these cases are unlikely to be considered anything more than nuisances. As Horace explains:

A major driver of legal precedent denying the use of nuisance ordinances comes from an Obama-era Supreme Court ruling. In the 8-0 American Electric Power v. Connecticut decision in 2011, the U.S. Supreme Court ruled that corporations cannot be sued for greenhouse gas emissions because the Clean Air Act specifically tasks the Environmental Protection Agency and Congress with the proper regulatory authority. Put another way, only the executive and legislative branches – not the judicial branch – may regulate and impose climate change policy. That precedent was properly cited last year when New York City’s climate lawsuit was bounced out of court. Also last year, a federal judge dismissed Oakland and San Francisco’s lawsuit for being outside the court’s authority.

And then there are the optics. While demonizing companies for finding, extracting, refining and delivering energy, these governments fail to account for the fact that they are large buyers and users of that energy for everything from buses to buildings. On top of that, many of the plaintiffs seemed to forget the perils of climate change in their locales when it came time to pitch to potential investors.

To read all of Horace’s commentary – “The Shameless Hypocrisy of Cities Suing for Climate Change Damages” – at the Issues and Insights website, click here. 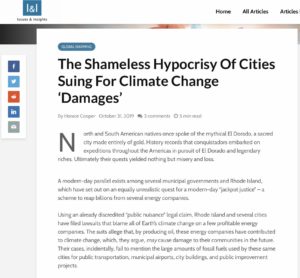 What is taking place is not an impeachment, it is a COUP [Trump tweet – truncated]