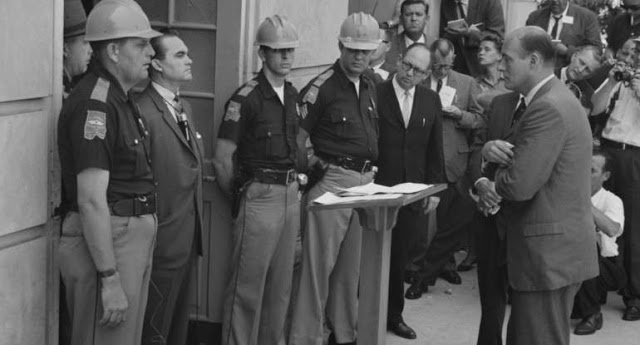 BY
Photo: Governor George Wallace blocks the schoolhouse door. (Library of Congress photo)
In 1935, Alice Jackson was denied admission to the University of Virginia.  When she asked why she was denied, university officials were frank. She was denied admission because she was black, they told her, as well as “for other good and sufficient reasons not necessary to be herein enumerated.”
Eventually, the plight of Alice Jackson and James Meredith at Ole Miss and others would lead to a broad national consensus that denying admission to a public college because of the race of the applicant was both illegal, but also immoral.
Everything old is new again.  In Virginia, universities are once again denying admission to students because of their race, only the victim classes have changed.
That is the conclusion reached in Preferences in Virginia Higher Education, a discouraging new study by Dr. Althea Nagai of the Center for Equal Opportunity.
Nagai reached this conclusion after reviewing admissions records at five top Virginia public universities: the University of Virginia (UVA), the College of William and Mary, Virginia Tech, James Madison University, and George Mason University.
This is something that the Virginia General Assembly, which has ultimate control over public education, can end.  Allowing blatantly discriminatory admissions policies will send the wrong message to students and parents – that Virginia, a state that once denied admission to Alice Jackson, is back in the business of racial discrimination in admissions.
Failure to change may also invite a lawsuit and scrutiny from the Department of Justice for civil rights violations in education.
Nagai’s analysis showed that the two universities that consider themselves the state’s best—UVA and William and Mary—seem to discriminate the most according to race.
Comparing admission rates of in-state applicants with similar SAT scores and grade point averages (GPAs), Nagai found that UVA admitted 74% of black applicants, 46% of Hispanic applicants, 30% of white applicants, and only 25% of Asian-American applicants.
Racial discrimination in admissions at William and Mary was even more severe.  Given the same credentials (SAT and GPA), William and Mary admitted 80% of black applicants, 58% of Hispanics, 17% of whites, and only 10% of Asian-Americans.
Examining the records of applicants with similar GPAs who were accepted by UVA, Nagai found that the black-white SAT gap was 180 points. Put another way, the typical white applicant would have to score 180 points higher than the typical black applicant to get into the school.
The comparison at William and Mary was even starker. There the black-white SAT gap was 190 points.
The SAT gap between black and Asian-Americans with similar GPAs being admitted to UVA was an astounding 240 points—the same as at William and Mary.
In the time period that Nagai studied, she found that UVA rejected 2,295 applicants (mostly whites and Asian-Americans) who had higher grades and test scores than black students who were admitted.  William and Mary rejected 943 students with better grades and test scores, while the other three schools, which the study showed engaged in much less discrimination, also had “significantly fewer rejectees with better credentials.”
There are real victims here—real people, students who worked hard and would have been admitted but for their race–just like Alice Jackson.
The study showed there are more than 3,000 students who were qualified to attend UVA or William and Mary but were not admitted because they were the wrong race. Those are real, identifiable victims of race-conscious government policies.
The odds are especially against you if you are an Asian applicant to these schools. Examining applicants with similar credentials, Nagai calculated the odds of getting into these five schools by race.  Her findings: black applicants were 6.75 times more likely to gain admission at UVA than were their white peers. At William and Mary, black applicants were 19.77 times more likely to be accepted than were white applicants with the same credentials.
At all five universities, white, black, and Hispanic students were given preference over Asian-American students.
Blatantly discriminatory admissions practices tell students their skin color or ethnic background is more important than their achievement. It’s the same philosophy that denied James Meredith admission to Ole Miss in the first place. But advocates of these racial policies in Virginia will tell you it’s not about race.
Instead, it must be some “other good and sufficient reasons not necessary to be herein enumerated.”
In the end, it’s about race, period.  America was supposed to have rejected the immorality of government decisions based on skin color. Advocates of these polices have abandoned the moral high ground. Ignoring race, to them, has fallen out of fashion.
The Virginia legislature must put a stop to it.
https://pjmedia.com/jchristianadams/comeback-study-shows-universities-denying-admission-based-on-race/