Coronavirus Too Great an Opportunity for Left to Waste 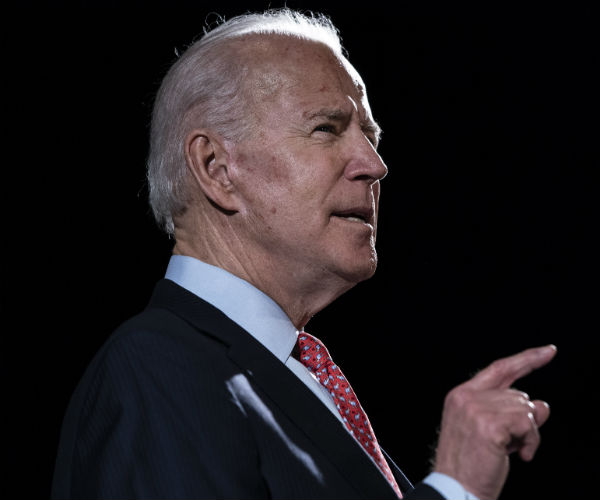 By
Democratic presidential candidate former U.S. Senator and Vice President Joe Biden delivers remarks about the coronavirus outbreak, at the Hotel Du Pont March 12, 2020 in Wilmington, Delaware. (Drew Angerer/Getty Images)
As the nation panics over the coronavirus (COVID-19), Washington Democrats and their media allies are doing their best to weaponize the issue.
From their point of view, the virus is too great a political opportunity to waste.
The weaponizing of the virus for political gain has already begun — at the expense of the economy and the livelihoods of Americans.
You would think that, in this time of national crisis, Democratic leaders would call for political unity in fighting the disease — not quite.
Instead, they are spreading their own “virus of divisiveness.”
Presidential candidate Bernie Sanders, I-Vt., accused the Trump administration of “incompetence and recklessness” [that] has “threatened the lives of many people in our country.”
Former Vice-President Biden added more fuel to the virus panic, saying, ” . . . Public fears are being compounded by a pervasive lack of trust in this president.”
This is just more of the left’s divisive rhetoric.
It’s so disgusting to hear Washington Democrats, left-wing media pundits, supporters of Joe Biden — and Biden himself — say that President Trump has created an atmosphere of hate and divisiveness in the country.
On ABC’s “This Week” in February of this year, Biden said that Trump was “dividing us based on race” and that he “has not condemned white supremacy and neo-Nazis.”
His comments were refuted by Factcheck.org which cited Trumps Aug. 14, 2017 statement saying, in part:
” . . . we condemn in the strongest possible terms this egregious display of hatred, bigotry, and violence. It has no place in America . . . Racism is evil. And those who cause violence in its name or are criminals and thugs, including the KKK, neo-Nazis, white supremacists, and other hate groups that are repugnant to everything we hold dear as Americans.”
Political intolerance and divisiveness weren’t born with Donald Trump — it began in the Obama administration.
An October CNN/ORC, poll revealed that a majority of Americans said relations between blacks and whites in the U.S. had worsened under Obama.
A month later, in November of 2016, a Gallup poll found that 77 percent of Americans, a then new high, believed the nation was divided on the most important of values.
Since Trump took office, the left has raised the level of political intolerance, inciteful rhetoric, and divisiveness against those who dare disagree with their brand of politics.
Senate Minority Leader Chuck Schumer’s, D-N.Y., is a good example.
His recent threatening remarks targeting two members of the U.S. Supreme Court– Justices Brett Kavanaugh and Neil Gorsuch — are a good example of how the left is spreading its virus of divisiveness:
“I want to tell you, Gorsuch. I want to tell you, Kavanaugh, “You have released the whirlwind, and you will pay the price. You won’t know what hit you if you go forward with these awful decisions.”
His comments were roundly condemned.
It’s obvious that Schumer and his friends on the left have already forgotten — or don’t care — what the virus of hate and its rhetoric can lead to.
On June 14, 2017, a supporter of Democratic presidential candidate Bernie Sanders opened fire on Republican politicians in Alexandria, Virginia, seriously wounding House GOP Whip Steve Scalise of Louisiana and four others.
In October of 2019 eleven people were killed when a gunman entered Pittsburgh’s Tree of Life synagogue and opened fire on the congregants. “The victims ranged in age from 54 to 97; eight were men, three were women. Two of them were brothers, and two were a married couple.”
In December of 2019 six people were killed in a targeted Jewish kosher supermarket in Jersey City, New Jersey, including six bystanders.
Of course, not all hatful rhetoric leads to violence — it just suggests it.
Just one day after Trumps inauguration, entertainer Madonna told the anti-Trump Women’s March, “Yes, I have thought an awful lot about blowing up the White House . . . “
And we all remember actress Kathy Griffin posting a picture of her holding up a bloody decapitated head of Donald Trump; Rep. Maxine Waters, D-Calif., telling her supporters to harass members of the Trump administration in a “restaurant, in a department store, at a gasoline station…,” Senator Cory Booker, D-N.J., saying he felt like “punching” Trump; and, actor Johnny Depp asking a crowd in England, “When was the last time an actor assassinated a president?”
Just imagine the reaction of the left-wing media and Democrat establishment if conservatives had engaged in such conduct and speech against Barack Obama!
You can bet that many of them are quietly hoping that the coronavirus spreads and the economy sinks — regardless of the cost to the country — because they think it will hurt President Trump.
A sad commentary on the left’s virus of political hate and divisiveness!
Clarence V. McKee is president of McKee Communications, Inc., a government, political, and media relations consulting firm in Florida. He held several positions in the Reagan administration as well as in the Reagan presidential campaigns. He is a former co-owner of WTVT-TV in Tampa and former president of the Florida Association of Broadcasters. Read more of his reports — Go Here Now.
https://www.newsmax.com/clarencevmckee/scalise-virginia-pittsburg-synagogue/2020/03/16/id/958544/