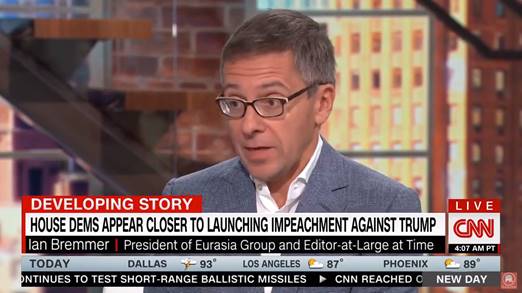 Democrats continue to show voters just how unhinged they are: While President Trump led on the world stage at the UNGA, Democrats are singularly focused on their baseless impeachment witch hunt.
This is a tired tactic.
After coming up empty with their Russian collusion delusion, Democrats have moved to a new white whale: a phony Ukrainian scandal that is light on details to put it mildly.
Not only does the whistleblower who started this whole charade nothave direct knowledge of the call, The Washington Post reports Trump’s phone call had “nothing to do with a quid pro quo” and that Ukraine in fact, received the aid.
But that still hasn’t stopped Democrats from devoting all of their energy to continue to smear President Trump instead of focusing on the fact that Hunter Biden, despite having no experience working with Ukraine or the natural gas industry, was paid $50,000 a month “clearly to be selling influence” to his father Joe and the Obama Admin.
Ian Bremmer: “Biden Does Have A Problem,” Hunter Biden Was Paid “Clearly To Be Selling Influence”
So as the radical left’s ranks grewover the past day with 9 more Democrats from districts President Trump won in 2016 announcing they’re all-in for impeachment, those Democrats have communicated to their constituents that there is zero day light between them and the far left that has been pushing for President Trump’s impeachment since before he was even sworn in.
Bottom Line: Despite an all-out assault on President Trump, he still has a higherapproval rating than Obama did at this point in time. This round of baseless calls for impeachment is the Democrats’ acknowledgment of their inability to beat President Trump at the ballot box so they’ll try impeachment instead.