Throughout the 2020 shareholder season, companies have used the virtual meeting format adopted for COVID-19 restrictions to avoid facing tough questions from conservative investors.

In the traditional in-person meeting format, a CEO never knows what questions might come from the audience. Virtual meetings however give a company’s staff the luxury of cherry-picking questions about company priorities as well as softball questions and positive comments while ignoring or “not finding the time” to address probing or uncomfortable questions.

Dick’s Sporting Goods presents one of the most egregious examples of a company wanting to duck concerned shareholders. As a result, I am in limbo as to whether or not Dick’s CEO Ed Stack – son of Dick – is ever going to address my concerns about the logic of a sporting goods retailer actively turning away from gun sales. It’s a follow-up to my past in-person interaction with Stack that he clearly didn’t enjoy.

At the 2018 in-person Dick’s shareholder meeting, shortly after the company announced it would end sales of certain guns and accessories and impose age restrictions on remaining gun purchases, I warned Stack that he risked alienating more than just those seeking to buy guns. I predicted people would also stop shopping at Dick’s for golf clubs, tennis balls and non-firearm hunting equipment. At the time, Stack felt his policies would appeal to as many or more people as they offended. He personally told me it would be “fine” if I boycotted the chain.

So, my very pertinent question for Stack this year, which may never receive an answer, was:

Mr. Stack, when I warned at the 2018 shareholder meeting that you’d lose customers by restricting gun sales, you said it was “fine” if I no longer shopped at Dick’s. I haven’t, and it’s not just me. You told Business Insider that customer support for your anti-gun advocacy was “kind of short-lived,” and estimated losses at a quarter of a billion dollars. You’re continuing to shed guns and hunting departments, and sold Field & Stream locations to a competitor that is posting profits that exceeded forecasts. In the marketplace, hunting gear sales are expected to increase while gun sales are through the roof. How do you square your stakeholder advocacy with your fiduciary responsibility to shareholders?

Dick’s held its virtual shareholder meeting at 7:30am Eastern time today (that’s 4:30am for investors on the West Coast!). It lasted less than five minutes. There was no presentation – nothing as to how bad or good the company is doing right now. Just the election of board members and the confirmation of the accounting firm – basic meeting business. And there was no intention of actually taking questions during the meeting.

There was an opportunity to ask questions, but on strange terms that the National Center’s Free Enterprise Project (FEP) has never experienced until now. According to the meeting rules: “Although questions will not be answered during the meeting, a document will be posted on our Investor Relations website… after the meeting summarizing and answering the questions received that met the criteria outlined in these Rules of Conduct.”

So no need for Stack to speak on his feet – even if he was tipped off to the questions beforehand and even if he was slipped some talking points. And, by the reading of the rules, my question could end up being summarized down to whether or not the company stands by its previous policy – to which the answer would like be “yes.”

I wrote the question with the intention of eliciting more than one syllable from Stack.

But there’s a good chance it won’t even be answered in the deep recesses of the Dick’s corporate website. When I tried to use the control number provided by the company holding FEP’s investment in Dick’s, the website would not allow me to log in. I thus missed my chance to type the question into the online portal during the mere five minutes that the meeting was in order, and technically am therefore in violation of the rules. I totally expect Stack to use this as a reason to not answer me. After all: “If a question violates these Rules of Conduct, it will not be answered.”

Not for my lack of trying. I was eventually kicked off the virtual platform that Dick’s used for the meeting because I tried to access it too many times. I could have tried again after a five-minute timeout, but the meeting was over by that time. My call to the Dick’s investor relations office went to a customer service center that was closed. My email garnered an auto-reply that promised a response within 72 hours. I nonetheless submitted my question through the investor relations email address.

I also warned that FEP plans to complain to the U.S. Securities and Exchange Commission (SEC) if Dick’s does not respond to our question. After all, we are shareholders and did everything we could to comply and submit the question.

After the meeting ended, I received an email from Dick’s Senior Director of Investor Relations Nick Gilch. He asked for the control number I tried to use. Since he replied to the email that contained my question, I noted that I looked forward to seeing Stack’s answer on the Dick’s website.

Companies ranging from Macy’s to Nordstrom to United Airlines to BlackRock have not taken FEP-submitted questions during their virtual meetings this season. An SEC investigation, as well as hearings on Capitol Hill, seem justified about companies not fulfilling their obligations to shareholders. 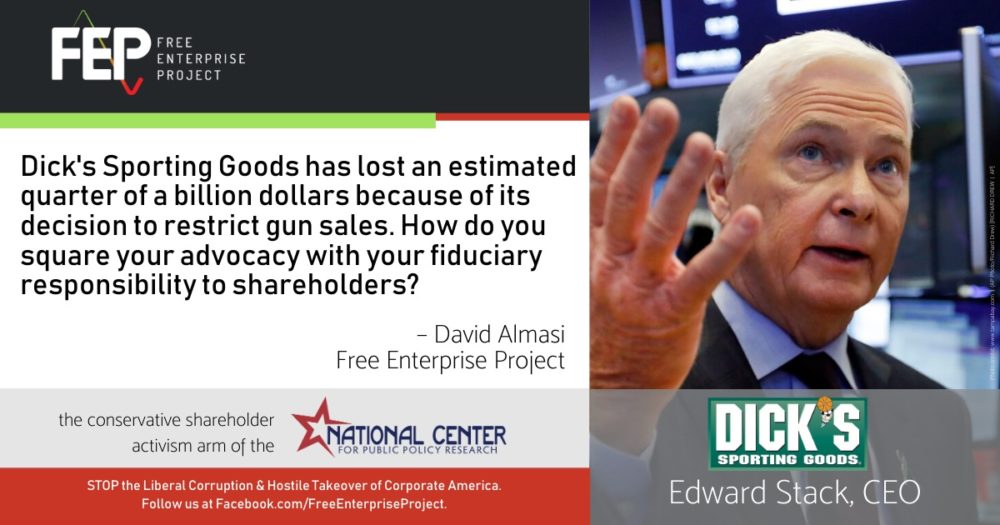 Pelosi rejects calls to shutter Capitol: ‘We’re the captains of this ship’

Is It Inflation-Adjusted? Spot the Creeping Tax Increases for 2020

John Kerry: Some evidence against Trump ‘more powerful already than what we saw…