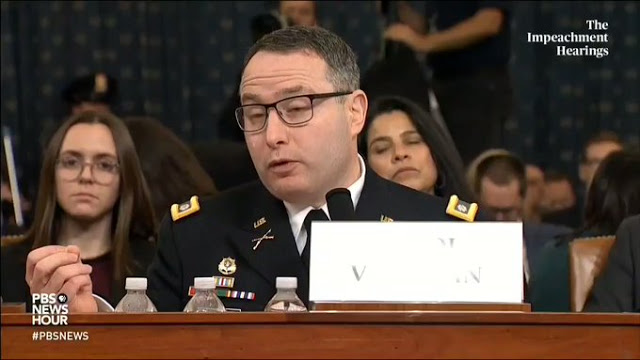 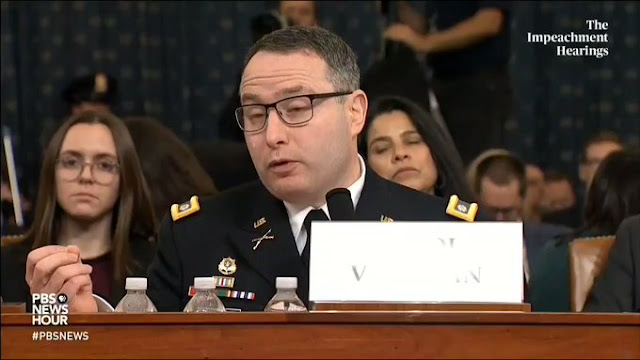 Lt. Col. Alexander Vindman, Director for European Affairs for the United States National Security Council
Well, the first round of today’s Trump impeachment hearings has concluded. Jennifer Williams, an adviser on Russia to Vice President Mike Pence and Lt. Col. Alexander Vindman, Director for European Affairs for the United States National Security Council. It was nothing all that groundbreaking. It was once again another set of government bureaucrats who disagreed with President Trump on Ukraine policy, leaked it, and are now part of the Democratic Party’s quasi-coup to remove the president based on shoddy quid pro quo allegations.
This stems from the Trump-Ukraine whistleblower, who alleged that in a July phone call between Trump and the Ukrainian political leadership, the president threatened to withhold military aid unless a corruption probe was opened into Hunter Biden’s position on a Ukrainian energy company; Biden has zero experience in the energy sector.
This quid pro quo nonsense is just the second wave in the Left’s push to impeach Trump. They tried to use Russian collusion, which turned out to be a total myth but failed. Now, they have an even shakier cause, but 2020 is right around the corner. The economy is still going strong. Trump is on a path to re-election and their 2020 crop is quite mediocre. This their best shot to remove the president. They have to take it.
And yet, who is this so-called whistleblower? A name has been floated around, but there has been zero confirmation. Rep. Adam Schiff (D-CA), chair of the House Intelligence Committee, has made it known that he will shut down questioning that might lead to the whistleblower being outed.
Asked and answered!
Adam Schiff keeps saying the whistleblower has a “statutory right to anonymity.” He said it again this morning. It is nonsense. Only the IC official who receives a whistleblower complaint is required to withhold the name, and not in all circumstances.
his office not having contact with this person. Schiff’s staff did—they knew the contents of the complaint before it was formally filed. In today’s hearing, it appears that Vindman had contact and might even know this person despite saying otherwise in a previous deposition on the Hill when this impeachment inquiry was being carried out in secret in Schiff’s basement. It’s now open due to the formal House vote.
If Adam Schiff & LTC Vindman don’t know who the “whistleblower” is, how would they know that naming the one person LTC Vindman spoke to in the intelligence community would out the “ whistleblower?”
Here’s some real collusion :

“I had my meeting w/the attorney, & I did my coordination, & I spoke to the appropriate people in the interagency”

“Appropriate people” being a registered Dem w/known bias against POTUS who works for CIA?

Whoops! We’re not allowed to ask that!

Schiff lied about his staff not speaking to leaker

Schiff still claims to not know who the leaker is, but magically can shut down questions about the leaker before they start

Democrats think you are stupid.

Lt. Colonel Alexander Vindman admitted to the House Intelligence Committee Tuesday to leaking information to the anti-Trump whistleblower at the center of the Democrats’ partisan impeachment proceedings.
“Lietenant Colonel Vindman, did you discuss the July 25 phone call with anyone outside the White House on July 25 or the 26 and if so, with whom?” Republican Rep. Devin Nunes of California inquired.
Yes. I did,” Vindman answered in the affirmative.
When pressed on who Vindman spoke with about the call, Vindman said he spoke with two individuals not in the White House, including Deputy Assistant Secretary George Kent and another individual in the intelligence community that Vindman refused to name before being cut off by Democratic Chairman Adam Schiff.
[…]
Vindman testified under oath in a private deposition last month that he was unaware of who the whistleblower was. On Tuesday, Nunes pressed Vindman on how it is possible that he might out the whistleblower if he does not know the identity of the whistleblower.
“Per the advice of my counsel and the instructions from the chairman, I’ve been advised not to provide any specifics on who I have spoken to with inside the intelligence community,” Vindman said before being cut off by his own lawyer.
Recall that Vindman testified under oath last month that he didn’t know who the whistleblower is.

But when asked to name the unnamed intel analyst he leaked the July 25 call to, he refused, and his attorney said he wouldn’t name the whistleblower.

VINDMAN, on October 29: “I do not know who the whistleblower is.”

VINDMAN and his lawyer, today: I won’t tell you the name of the intel analyst I deliberately leaked to, because it would out the anti-Trump whistleblower.

Pick one, Vindman. Because one of those is a lie.

How can Col. Vindman and Adam Schiff claim they don’t know who the leaker (“whistleblower”) is, and simultaneously hide the name of the individual in the “intelligence community” (CIA) Vindman spoke to?

This is a sham!

Oh, and was there any testimony from Vindman or Williams that backed up the trumped-up quid pro quo allegation? Nope. And Vindman said there was nothing wrong with the transcript of the July phone call that was released by the Trump White House.
https://townhall.com/tipsheet/mattvespa/2019/11/19/did-vindman-just-lie-about-knowing-the-trumpukraine-whistleblower-n2556711?utm_source=thdailypm&utm_medium=email&utm_campaign=nl_pm&newsletterad=&bcid=1b87ed489cb499e9d52de389e64c7f01&recip=19399969