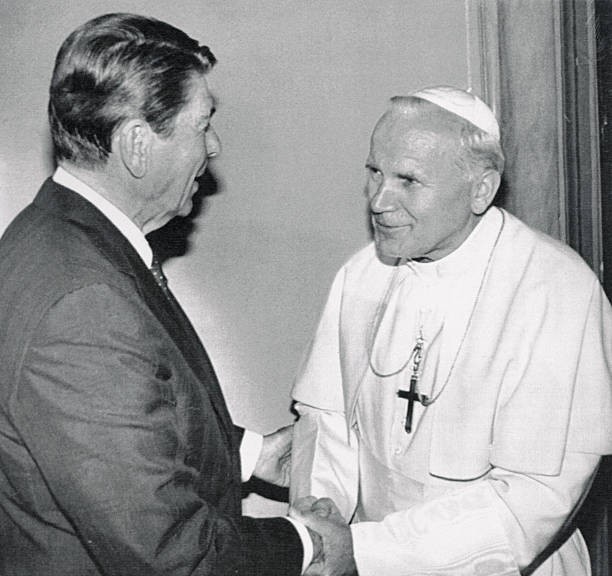 “Socialism and Communism rob people of their liberty, freedom, dignity and security. But nobody can steal their spirit, faith and beliefs, since those belong to God the Almighty.”

World War II altered the world forever. Before the ink was dry on the Paris Peace Treaty, Joseph Stalin was remaking history. From 1945 through the 1960s, the USSR gutted institutions by tactically maneuvering terrorist campaigns. With political murders, outright theft of God-given rights, and the outlawing of worship, organized tyranny subjugated Eastern Europe from the world for decades.

Since Communism and religion are in conflict, Stalin immediately outlawed all religion. He attacked Christians and Jews. Clergymen were shot or sent to labor camps. Religious teaching and worship was forbidden. In 1929 at an Agitprop conference, he said religion is a weakness and all allegiance must be to him as leader of the state. Anyone refusing to follow his orders would be executed in a public square. 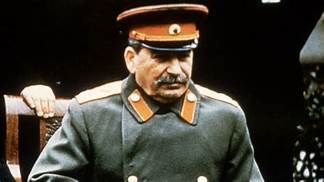 “There is an easy solution. No churches, no priests, no problems.”

During decades of Communist terror, celebrating Christmas was a crime. Stalin’s atheist regime denied our Savior’s birth and replaced Christmas with a celebration of his own birthday. Former Christian holy days were replaced with days of extra labor for the state. The word Christmas was banned, and Santa Claus was replaced by Father Frost, who gave children candy on New Years.

According to the Reds, the only wise men were the Communist party leaders in the Eastern Bloc.

Those who dared to worship did it secretly in the shadows of cellars in their meager homes. Only their most trusted friends and family were invited to attend. They exchanged UN rations as gifts.

Jews made Menorahs from matchsticks in fireplaces, well camouflaged behind smoldering logs.

But Christians never lost hope. They received packages from Americans and UN Relief Funds and tons of U.S. military rations, including candy that parents would hide and give away as gifts. Radio Free Europe brought hope at Christmas to families imprisoned within the dungeons of Russian hell.

On Christmas, Radio Free Europe would turn up their transmitters and retell how Mary and Joseph followed the shining star to Bethlehem and gave birth to the Savior of the world. Radio Free Europe assured them Jesus had united all Christians to fight for a return of Christmas to the Eastern Bloc. 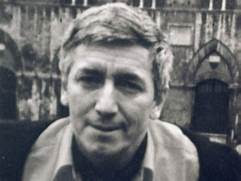 “Russia can’t keep Christmas from you when we celebrate it with you on the air.”

The Eastern bloc hoped that with the death of Stalin in 1941, that Nikita Khrushchev would allow them to worship in private on special days like Christmas and Hanukkah. But Khrushchev’s anti-religious campaign was as brutal as Stalin’s desire to cleanse the region. Khrushchev ordered his atheist army to demolish 200 Eastern Orthodox churches. His 1954 Resolution Act closed over 58,000 churches and synagogues. By 1965, the USSR was void of any reference to the Lord or to religion.

“Saying ‘in the name of God’, is a bad habit all Soviets have to break.”

The Cold War lingered on for decades, and all attempts by U.S. and other world leaders could not penetrate the Communist barricade that had isolated them from religion or Western influence. They had additionally allied with other communists around the globe, who were a continual threat to world peace. When Cuba joined their axis of evil, communism became a deadly threat to U.S. freedom.

In October 1978, divine intervention would bring Christmas back to the Eastern Bloc along with a surprise gift. It was not some abrupt changes in thinking by the Soviets, international pressure or a threat of war. It was the election of the first non-Italian pope in the history of the Catholic Church. God would bring Christmas to the USSR and give them a special gift: He’d end Communism also.

When Pope John Paul I abruptly died, 120 Cardinals were called to Rome. They spent a week in prayer seeking consensus on a new pope. After seven ballots, with Italian nominees, none gained 75 votes. Cardinal Franz König, a brilliant diplomat, suggested they nominate the Polish Cardinal Wojtyla. The other cardinals soon concurred. The time was right to elect a Pope from a Communist nation.

“When we worship, God is there. Communists fear Him more than us.” 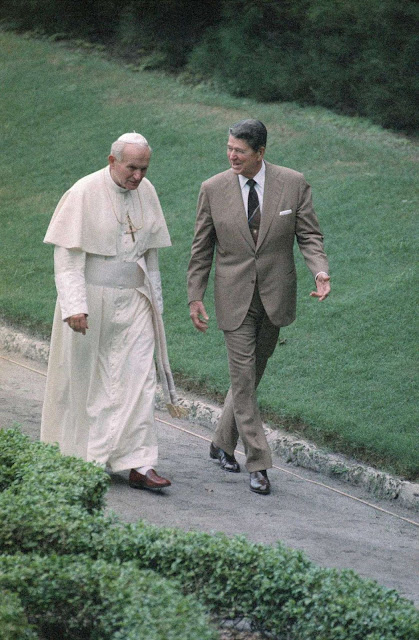 On March 30, 1981, in the nation’s capital, President Ronald Reagan, the leader of the free world, was shot by a would-be assassin. On May 13, 1981, in the heart of St. Peter’s Square, Pope John Paul II, leader of the world’s largest Christian faith, was shot by a would-be assassin. This divine consequence would forever unite the world’s most prolific Christian leaders and end Communism.

Reagan was the first president to form a spiritual bond with a Pope. But it was these mutual attempts upon their lives only one month apart that made them cognizant that God had appointed them to lead the army to end Communism in Soviet nations and restore the right to worship freely.

Both leaders knew the USSR was in socioeconomic turmoil, and were ready to strike at any time. 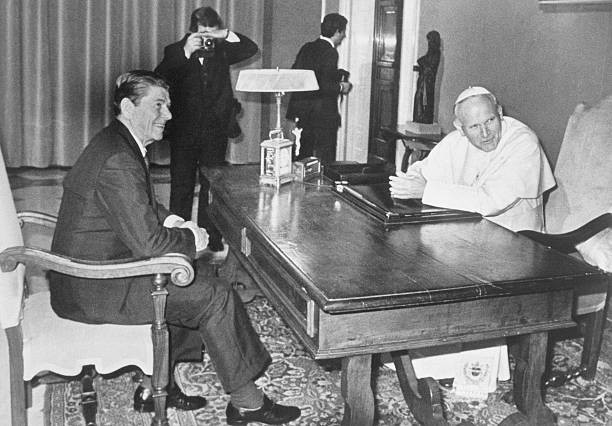 Reagan worked with Pope John Paul II on a plan to restore religious freedom in the USSR. In early 1987, Reagan met with Gorbachev, but he said. “It is not what is best for the party.” Reagan turned to Pope John Paul II for advice and he said: “Its God’s will it is done before next Christmas.”

Reagan returned to Russia June 12, 1987, to speak to the people of East and West Berlin about the benefits of uniting Berlin. He asked to speak at the Brandenburg Gate. He promised Pope John II, he would appeal directly to the people about freedom of religion and building a new free society together. As he neared the end of his plea for unification, he said, “Mr. Gorbachev tear down that wall!” Within months the wall came down, and religious freedom was being restored in the USSR. 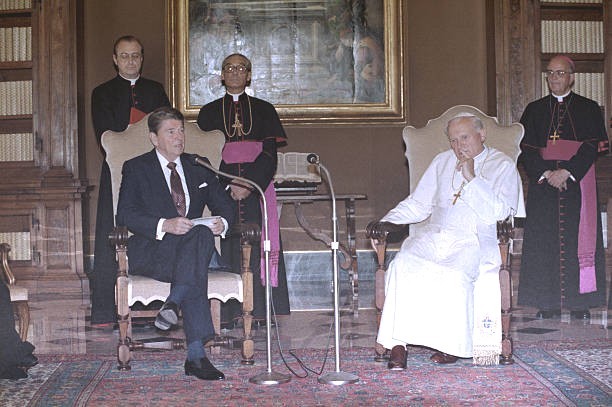 Reagan was the first president to establish diplomatic relations with the Vatican. Like our Savior, assassins tried to stop him and Pope John Paul before they completed their mission. The bullets that flew in Washington and Rome drew them closer. These aging statesmen had a vision: to restore religion and end Communism in the Eastern Bloc, and they did that for God and country. 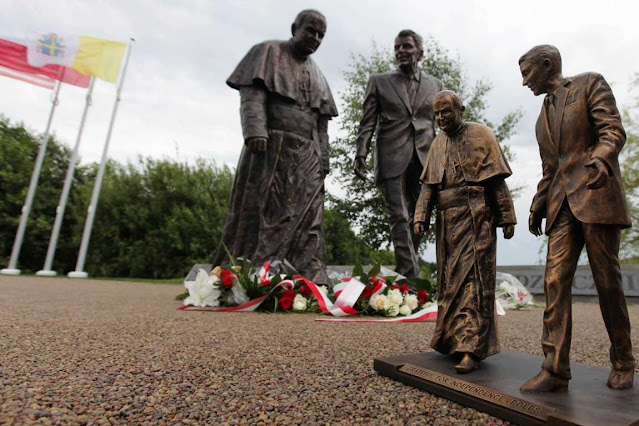 Divine intervention returned Christmas to the Eastern Bloc, and their first gift was liberty. In 2012, Polish officials unveiled a statue of President Reagan and Pope John Paul II in “Ronald Reagan Park,” honoring them for bringing religion and liberty back to Eastern Europe. Each Christmas, they are honored in church services in nations that were under Soviet control in East Europe. Ronald Reagan told Pope John Paul at their final meeting, “Look how evil forces were put in our way and Providence intervened.” Pope John Paul replied, “It was God’s way of uniting our spirits for Him.” 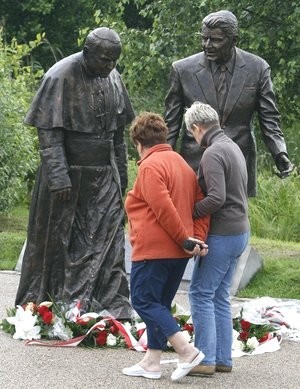 “Those who said we’d never see the end of Soviet Communism in Eastern Europe never imagined what a Catholic Pole in the Vatican and an American Protestant in the White House would tell the Russians if they did not end Communism: Either you do it or, we’ll do it for you!” 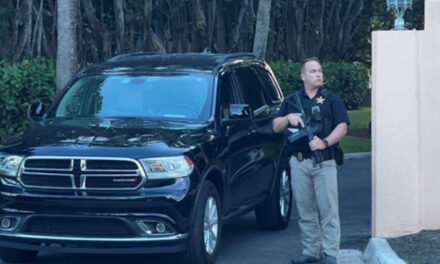 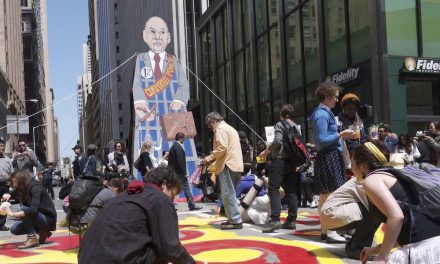 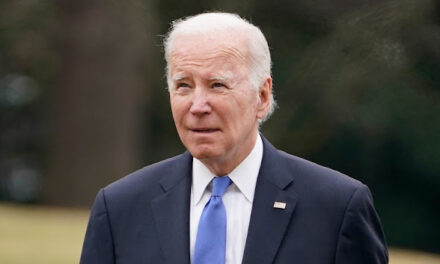 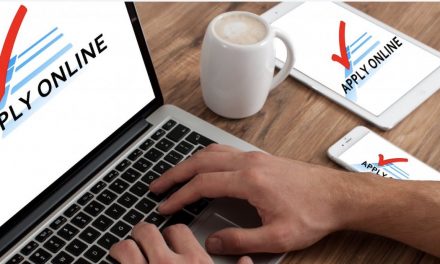