Double Standard Much? Biden’s Threat to Withhold $1B from Ukraine Violated the Law 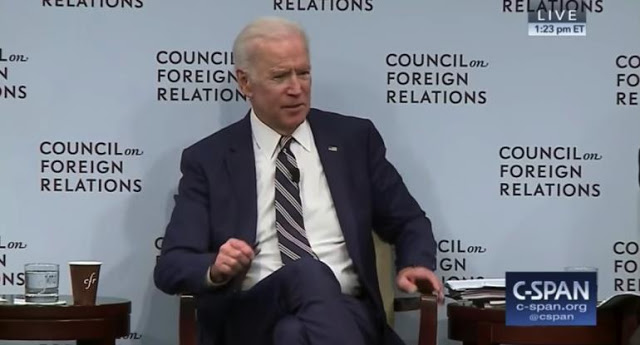 BY
Biden speaks at the Council of Foreign Relations, January 2018 (Screenshot via YouTube)
On Thursday, the Government Accountability Office (GAO)  ruled that Trump violated the law by temporarily withholding aid to Ukraine. But, if the Trump administration broke the law, then Joe Biden (and the Obama administration) broke the law, too.
Remember that $1 billion loan to Ukraine in 2014 that has come under scrutiny since Democrats started their whole impeachment nonsense? Remember how in January 2018, Biden spoke at a Council on Foreign Relations meeting in Washington, D.C., during which he bragged about how he threatened to withhold that $1 billion loan to Ukraine unless they fired the prosecutor who was investigating Burisma Holdings, the gas company his son Hunter was sitting on the board of, and making over $80,000 a month doing so?
In case anyone forgot, here’s what Biden said about that loan:
And I went over, I guess, the 12th, 13th time to Kiev. And I was supposed to announce that there was another billion-dollar loan guarantee. And I had gotten a commitment from Poroshenko and from Yatsenyuk that they would take action against the state prosecutor. And they didn’t.
So they said they had — they were walking out to a press conference. I said, nah, I’m not going to — or, we’re not going to give you the billion dollars. They said, you have no authority. You’re not the president. The president said — I said, call him. I said, I’m telling you, you’re not getting the billion dollars. I said, you’re not getting the billion. I’m going to be leaving here in, I think it was about six hours. I looked at them and said: I’m leaving in six hours. If the prosecutor is not fired, you’re not getting the money. Well, son of a bitch. (Laughter.) He got fired. And they put in place someone who was solid at the time.
According to the GAO, the Trump administration violated the law because the funds that were temporarily withheld were appropriated by Congress, and therefore the executive branch has no authority to place further conditions on that appropriation.
Biden argued that his actions were above board because he was carrying out the “official policy” of the Obama administration to root out corruption in Ukraine. “It was a fully transparent policy carried out in front of the whole world and fully, fully embraced by the international community of democracies,” he claimed.
Here’s the problem with that defense: like the military aid at issue with Trump and Ukraine, the $1 billion loan to Ukraine was also appropriated by Congress. The loan was part of a bill that was passed in March 2014, with a 399 to 19 vote in the House and a 98 to 2 vote in the Senate. By the GAO’s own reasoning with regard to the aid withheld by the Trump administration, the withholding of aid by Biden on behalf of the Obama administrations also broke the law.
Let’s not forget that Biden’s threat succeeded in getting the desired result. According to Viktor Shokin, the prosecutor who was investigating Burisma, Biden’s pressure was responsible for him getting fired. Shokin also said that Ukraine President Petro Poroshenko told him not to investigate Burisma because it was not in the best interests of the Bidens. None of the conditions Trump is alleged to have put on President Zelensky were ever met before the aid was ultimately released because Ukrainian officials never even knew the aid was being held back by the Trump administration.
So, will all those who are crying foul about the latest GAO ruling demand Biden be held accountable?
_____
Matt Margolis is the author of Trumping Obama: How President Trump Saved Us From Barack Obama’s Legacy and the bestselling book The Worst President in History: The Legacy of Barack Obama. You can follow Matt on Twitter @MattMargolis
https://pjmedia.com/trending/bidens-threat-to-withhold-1-billion-from-ukraine-violated-the-law/
_________________
FLASHBACK: The GAO Ruled Obama Broke The Law

Rev. John Witherspoon-Signer of the Declaration of Independence