Durham Investigation Is Criminal: a Disaster for the MSM 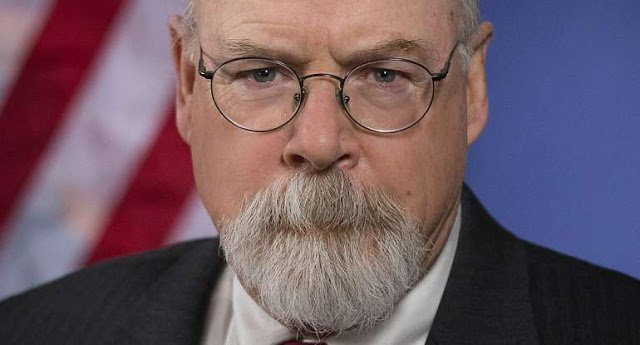 BY
John H. Durham, U.S. Attorney for the District of Connecticut (Public Domain)
Winter may be coming but it’s already Springtime for Lawyers in Washington, D.C.  The list of people lawyering up these days would probably fill this page and lap over onto the next. It’s just been announced that the John Durham investigation into the provenance of the Russia probe has turned into a criminal investigation.
Subpoenas and grand juries are coming, real ones, not the Star Chamber counterfeits being orchestrated by the panicked Democrats and their junior league Southern California Torquemada.
To those of us who have been watching this spectacle from the beginning, this was inevitable. After all, where’d the Mueller/Russia probe come from in the first place? Since there was absolutely no there there, it makes no sense that it wasn’t a fraud from the outset. Who started it? Who are the treasonous/seditious culprits who conspired to overthrow an election?
Well, we should soon be finding out, although we can make some educated guesses.
But we do know absolutely who collaborated in the crime, who were the accessories to and in some cases the instigators of this most heinous plot in American history….
… the mainstream media!
They were the more than willing conduits to lies leaked to them by a long list of truly dishonest, unpatriotic Americans – some inside our intelligence agencies and no doubt some foreigners as well.
The names of these institutions we all know and they are some of the most important companies on our media landscape.
This is time to name the biggest miscreants: The New York Times, The Washington Post, The Wall Street Journal (front pages), the infantile BuzzFeed, the risible CNN, ABC, CBS, and the multiple sexual molesters at NBC.
These are the people who have informed us, actually assured us, from the outset that Donald Trump had done things that deserved impeachment when all they did was try to overthrow an American presidential election. All that time they were harboring the real targets of the investigation, the real criminals.
Now it is time to overthrow them. They no longer deserve their place in our society.
Even now, within minutes actually, The New York Times is desperately  trying to spin the news as legally biased in some manner, insulting Durham with no knowledge.  How pathetic. How reactionary and how conformist. They really are still the paper of Walter Duranty, even though some of their more jejune reporters may never have heard of him.
Someone should remind the editors of the Times that it’s not the crime but the coverup.  They have been the masters of the coverup. The WaPo‘s reputation is up for grabs as well, their vaunted Watergate fame seriously besmirched.
And speaking of overthrowing, the networks deserve special opprobrium and scrutiny.  They are granted licenses by the government, as it happens licenses to spew propaganda. Should these be continued?
Will any of these people admit any of their culpability? It’s doubtful. As I type this, we are hearing a joint announcement from Reps. Schiff and Nadler that this is all “retribution.”  In the words of Hans Vaihinger, “as if.” Or better, Moon Unit Zappa, “Gag me with a spoon!”
A minor brouhaha occurred today — especially minor in light of the Durham announcement — when it was announced Trump was canceling government subscriptions to the Times and the Post.  If there are any of us who still have our own, we should follow suit.
PJ Media co-founder Roger L. Simon’s new novel is The GOAT. It’s better reading than the Mueller Report.
https://pjmedia.com/rogerlsimon/durham-investigation-going-criminal-a-disaster-for-the-msm

Ex-Ukraine prosecutor said he was told to back off probe of Biden-linked firm, files show (

In Cuba, this doctor’s home has running water for only one hour a day