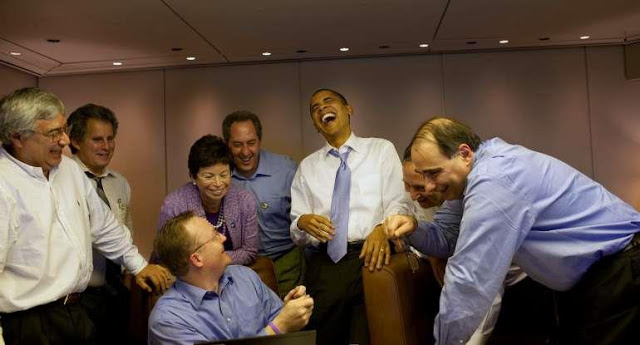 BY
President Barack Obama laughs with aides aboard Air Force One en route to Singapore, Nov. 14, 2009. (Official White House Photo by Pete Souza)
“Let’s call it Trumpvirus,” urged a New York Times opinion writer conspiratorially. Nancy Pelosi groused that President Trump waited too long to attack the coronavirus (COVID-19) and then impetuously declared he couldn’t have leftover and unspent Ebola virus money to fight it, while Senator Chuck Schumer looked down his nose and over his glasses to intone that it was the end of the world and the president hadn’t spent enough money to stop the scourge. Joe Biden and Michael Bloomberg have both been called out for politicizing the virus.
By their lights, Trump’s doing it all wrong. They won’t be able to tell you why, but (stomps foot) they just know. They’re praying for a pandemic filled with infected people and decimation of the stock market just to fix Trump’s wagon in his re-election campaign, now that the whole Russian-secret-agent and peeing-hooker story went belly-up.
They just know that he’s such a dummy that it wouldn’t ever occur to him to stop air travel from an infected nation, increase screenings, involuntarily quarantine those infected with the virus when they were repatriated and seek a vaccine now.
Oh, wait, he has done all of those things and was called a racist for doing it.
We’ve had several creepy viruses emerge over the past two decades. There’s been MRSA, SARS, and H1N1 (swine flu), to name a few. But it’s been the H1N1 flu that has been most compared to this outbreak.
Surely, St. Barack of Obama would have dealt with this horrible pandemic better than Orange Man Bad, right? No-Drama-Obama had this whole thing under control, of course!
Well, let’s compare and contrast.
The American Journal of Clinical Pathology reports that this coronavirus (COVID-19) was first seen in late December:
On December 30, 2019, scientists in China “a cluster of patients with pneumonia of unknown etiology was observed in Wuhan, China, and reported to the World Health Organization (WHO) China bureau in Beijing. A week later, January 7, 2020, a new coronavirus (SARS-CoV-2) was isolated from these patients.”
As we suspect, the Chinese government tried to keep the virus outbreak secret – for what reason we don’t know. What we do know, however, is that by January 31, 2020, President Trump had declared a public health emergency and began restricting U.S. access to non-citizens from China. Flights filled with U.S. citizens who were in Wuhan were brought to America and those people were quarantined on U.S. military bases for two weeks.
Though he lamented being called a “racist” for doing so, Trump says if he hadn’t hardened the U.S. borders at that point, the virus would have had gained a bigger foothold in the country.
Now, let’s go to the Wayback Machine. In April of 2009, the H1N1 became a pandemic.
But it wasn’t until six months later, October, that then-President Obama declared a public health emergency on what was already a pandemic. By that time, the disease had infected millions of Americans and more than 1,000 people had died in the U.S.
CNN reported at the time:
Since the H1N1 flu pandemic began in April, millions of people in the United States have been infected, at least 20,000 have been hospitalized and more than 1,000 have died, said Dr. Thomas Frieden, director of the Centers for Disease Control and Prevention. [emphasis added]
Furthermore, the CDC’s Frieden fretted at the time that efforts to create a vaccine had stumbled:
“We are nowhere near where we thought we would be,” Frieden said, acknowledging that manufacturing delays have contributed to less vaccine being available than expected. “As public health professionals, vaccination is our strongest tool. Not having enough is frustrating to all of us.”
Frieden said that while the way vaccine is manufactured is “tried and true,” it’s not well-suited for ramping up production during a pandemic because it takes at least six months. The vaccine is produced by growing weakened virus in eggs.
But wait, there’s more.
According to Virology Journal, the 2009 H1N1 came into the U.S. from Mexico:
The swine-origin influenza A (H1N1) virus that appeared in 2009 and was first found in human beings in Mexico, is a reassortant with at least three parents. Six of the genes are closest in sequence to those of H1N2 ‘triple-reassortant’ influenza viruses isolated from pigs in North America around 1999-2000.
Now, about that “racist” wall …
Every time the Left tries to make Trump look bad on this issue they’re found to be frauds.
In fact, by 2015, Obama was back trying to counter a new H1N1 outbreak in the country.
Democrats have weaponized the virus stories to get Trump. Of course they have.
But for the sake of argument, can we all stipulate that it would be really nice if we could just get humans to stop sleeping with pigs, kissing birds, and eating live bats so we wouldn’t have to deal with this?
Here’s Obama telling everyone in 2009 to wash their hands after the H1N1 virus had already become a pandemic:
https://youtu.be/Imi5M38n4pc
https://pjmedia.com/trending/fact-check-obama-waited-until-millions-infected-and-1000-dead-in-u-s-before-declaring-h1n1-emergency/?utm_source=pjmedia&utm_medium=email&utm_campaign=nl_pm&newsletterad=&bcid=227841a8b1ca836b99e21ea36efa6859&recip=28551147