Presented with its “Blueprint for a Better Deal for Black America” on the eve of the fifth anniversary of Michael Brown’s death there, Ferguson Mayor James Knowles III said “[w]e need partners… like Project 21 to give us this agenda and help us focus on what things we can do.”

At a press conference today in the chambers of the Ferguson City Council, Project 21 Co-Chairman Stacy Washington and member Chris Arps presented copies of the Blueprint to Mayor Knowles and council members Heather Robinett, J. Toni Burrow and Byron Fry.

The event was covered by the St. Louis NBC and CBS affiliates and the 50,000-watt radio station KMOX.

Chris said the presentation was meant to “heal wounds, encourage opportunity and help usher in a new era of black prosperity,” and was “not about finger-pointing, assessing blame or relitigating the Michael Brown shooting.”

Project 21’s Blueprint contains 57 policy recommendations over 10 key areas that are designed to remove barriers that keep black communities from reaching their full potential and ensure that access to the American dream is attainable for everyone. Many of the ideas proposed in the Blueprint can be implemented at a local level.

Stacy told Knowles and the councilmembers “you are in great company in receiving it,” mentioning that she and other Project 21 leaders previously presented the Blueprint at the White House and on Capitol Hill.Project 21 recently sent copies of the Blueprint to the mayor and city council of Baltimore after conditions in that city were criticized in President Donald Trump’s tweets.

Explaining the purpose for making Ferguson leaders aware of the Blueprint, Stacy said:

Our primary aim is to get the truth out there and to help the black community advance the American dream. We know the opportunity and prosperity that exists in America, and we want to see everyone partake in that…

I think these are ideas that everyone – regardless of partisanship – can come alongside and say let’s have a conversation. I believe that today’s effort with Mayor Knowles and the city council here in Ferguson is the beginning of that work.

Among the recommendations in Project 21’s Blueprint designed to help communities such as Ferguson are:

While observances of the fifth anniversary of Brown’s death tomorrow may be rooted in anger, Stacy said Project 21 seeks to help in discovering solutions to benefit Ferguson:

In the spirit of partnership – not rancor, not anger, but in a spirit of working together to improve the lives of people who truly deserve the fullest access to the American dream.

In his remarks, Mayor Knowles said:

Stacy will interview Mayor Knowles on August 9 on her “Stacy on the Right” podcast. She and Chris also plan to have subsequent meetings with members of the Ferguson City Council, and they used the press conference to publicly ask for meetings with St. Louis Mayor Lyda Krewson and St. Louis County Executive Sam Page about the recommendations in the Blueprint. 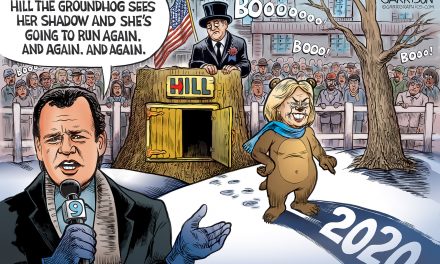