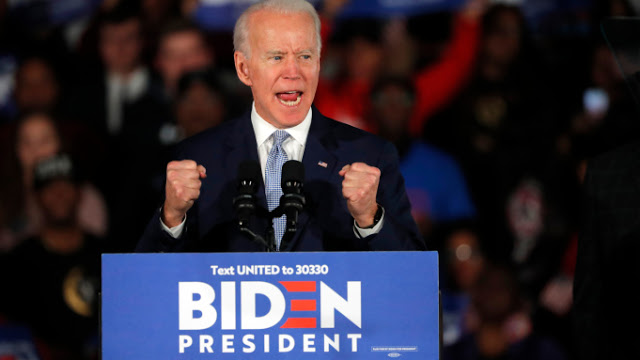 By
Joe Biden solidified his hold on the Democratic presidential nomination, winning a pivotal victory in Michigan, which was once seen as a potential source of strength for Bernie Sanders.
Biden also scored a comfortable win in Missouri and a blowout in Mississippi, two states in which he was heavily favored.
The Fox News Voter Analysis surveys, conducted in Michigan, Mississippi, and Missouri, shed light on some of the key trends and dynamics in the Democratic race to take on Donald Trump in the fall. The numbers below may change slightly as more results come in.
The former vice president’s continuing strength with seniors, black voters, and political moderates propelled him to victory. His campaign’s momentum was particularly apparent among late-deciding voters, who he won by at least 40 percentage points in each state. Importantly for Biden, roughly one-quarter or more voters in each state said they had just recently made up their minds.
Biden also significantly outperformed Sanders among suburban voters (winning by at least 20 points in each state) and those living in rural areas (winning by at least 30 points in each state). That included rural whites – a group that Democrats will try to win back in the general election.
Sanders’ base – young and self-identified “very liberal” voters – largely stuck with him, but he was unable to expand his coalition. As a result, more Democrats in each state said they would be satisfied with Biden as the nominee (between 76 percent in Missouri and 86 percent in Mississippi) than would be satisfied with Sanders (between 62 and 67 percent in each state).
Moreover, in an election centered on electability, Democrats felt Biden had a much better shot against Trump than Sanders.
Michigan
Sanders’ surprise 2016 win in Michigan gave his campaign a much-needed shot of momentum, but he was unable to repeat the feat this year. Democratic primary voters under age 30 were still a source of strength for the Vermont Senator, but he won just 13 percent of seniors – and more than twice as many seniors turned out as young voters.
Sanders was also able to win “very liberal” Michiganders by 28 points but couldn’t recreate his 2016 performance among working-class whites. Instead, this important group went for Biden by a wide margin.
Biden also won convincingly among women (+28 points), black voters (+36 points), and moderates (+48 points).
Michigan will likely be a pivotal swing state in November’s election, and fully eight-in-ten primary voters thought Biden could beat Donald Trump. Far fewer thought Sanders could prevail.
Most Biden voters said they would back the eventual Democratic nominee regardless of who won. Sanders voters were somewhat less certain, with roughly one-quarter saying their vote in November would depend on who won the nomination. Overall, eight-in-ten primary voters said they would definitely back the Democrat against Trump.
One positive sign for the president: almost half of Democratic primary voters in the Wolverine State favored increasing tariffs on goods imported to the U.S., which may suggest Trump’s economic approach will play well with the broader Michigan electorate.
Missouri
Nearly half of Missouri Democratic primary voters said health care was the top issue facing the country, a record high in this year’s primary season. Nearly seven-in-ten Show Me State voters favored a Sanders-style single-payer health care system, second only to Iowa (72 percent) among states surveyed as part of the Fox News Voter Analysis to date.
That wasn’t enough for Sanders, however. Almost nine-in-ten voters backed a public option approach to insurance, and voters who said health care was the most important issue facing the country broke for Biden by nearly 20 points.
In the end, Sanders won those looking for a candidate who would fundamentally change the political system by 18 percentage points, voters under age 45 by 25 points, and “very liberal” voters by 30 points.
Biden had much larger advantages with his base, including moderates (+49 points), voters over age 45 (+55 points), and those looking for a candidate who would restore the political system to the way it worked before Trump (+72 points).
Mississippi
Mississippi was not particularly competitive – which Sanders telegraphed by canceling a planned rally there last week in order to spend more time in Michigan.
The demographics in Mississippi did not do Sanders any favors, as the state had the highest share of black voters and one of the lowest shares of voters under age 30 of any primary surveyed thus far.
Biden won almost every demographic and ideological group, and was particularly dominant among seniors (+55), black voters (+60), and moderates (+58). He even held a narrow edge among self-described “very liberal” voters (+12).
Seven-in-ten Mississippi primary voters identified as moderate or conservative, making it one of the least liberal states to vote thus far. That showed in Democratic primary voters’ views on social policies: a record-high 30 percent opposed legalizing marijuana, while almost half opposed legalizing abortion under any circumstances.
Andrew is a Director at Beacon Research, a Boston-based polling and political consulting firm.
https://www.foxnews.com/politics/fox-news-voter-analysis-bern-out-bidens-surge-continues

De Blasio to endorse Bernie Sanders. The New York City mayor’s move is also about advancing his own political interests.