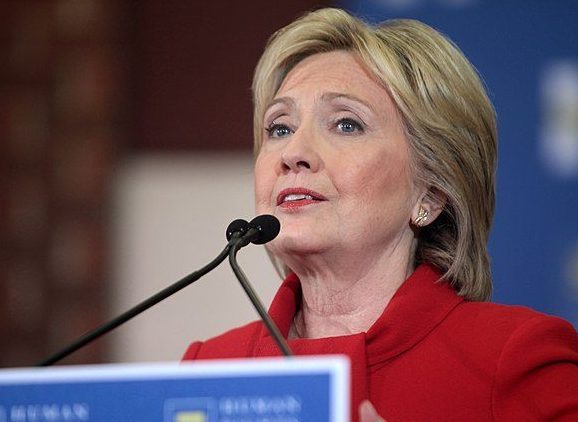 By
Last week, the Washington Post reported that the Justice Department had wound down a Hillary Clinton-related inquiry after finding “nothing of consequence.” That set off a series of Hosannas from the allegedly non-partisan press, which seems to notice quid pro quos only when they involve a Republican.
A quick review of the flagrantly corrupt dealings of the Clinton Foundation is in order.
When Hillary took the job of secretary of state under President Barack Obama, she promised that the foundation wouldn’t accept foreign donations. It took in money from at least seven foreign governments.
Documents showed that 85 of the 154 private interests who met with Clinton at the State Department had donated money to the foundation.
Emails unearthed by Judicial Watch showed that Clinton’s top aide, Huma Abedin – who worked for both the State Department and the foundation –  gave “special expedited access to the secretary of state” for those who gave $25,000 to $10 million.
Peter Schweizer’s book “Clinton Cash” exposed other unsavory entanglements between the foundation, government policy, and the Clintons’ pocketbooks.
As the late great columnist Charles Krauthammer put it, the foundation was “a massive family enterprise disguised as a charity” that was intended to help restore the Clintons to power. 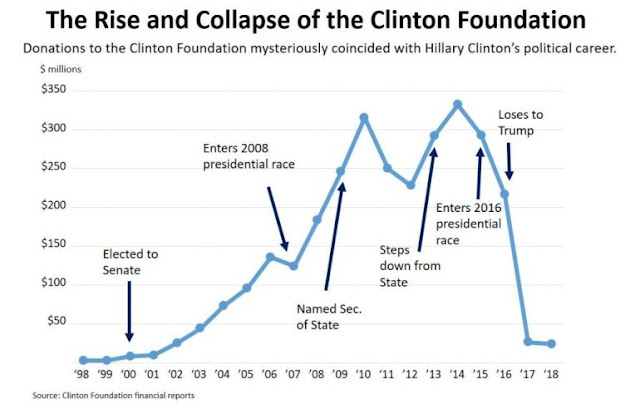 All the evidence you need that the Clinton Foundation was a corrupt enterprise is contained in the nearby chart, which shows grants and contributions each year, along with relevant developments in Hillary Clinton’s career.
Donations hit $134 million in 2010, the year after she became secretary of state. They stayed close to that level through 2016. The moment Clinton lost the election, donations cratered. They went from $217 million in 2016 to $26 million in 2017. Just months after Clinton’s loss, the foundation fired 22 staffers and shuttered the Clinton Global Initiative part of the foundation.
As soon as political access to the Clintons became worthless, so did the foundation.
The fact that Obama’s highly politicizedJustice Department and the partisan mainstream press didn’t aggressively investigate the foundation on public corruption grounds is hardly surprising.
When Trump took office, he pushed the Justice Department to see why the probe of the foundation went nowhere.
The Washington Post described it as nothing more than an attempt to “mollify conservatives clamoring for more investigations of Hillary Clinton” about “vague corruption allegations” involving the Clinton Foundation.
Vague? There wasn’t anything vague about it. Compared with the accusations against Trump, the corruption is crystal clear.
What is vague, however, is what the Post was reporting. While it says that the inquiry by U.S. Attorney John Huber found nothing to pursue, it adds, without explanation, that “the assignment has not formally ended and no official notice has been sent to the Justice Department or to lawmakers.”
Then, buried deep in the story, the Post reports that Huber’s inquiry was limited by then-Attorney General Jeff Sessions to determining “whether any matters not currently under investigation warrants the opening of an investigation, whether any matters currently under investigation require further resources or further investigation, and whether any matters would merit the appointment of a special counsel.”
The fact that Huber apparently decided that neither a new investigation nor a special counsel was needed, and that Justice didn’t require additional resources for matters “currently under investigation” hardly amounts to a vindication of Clinton.
Nor should it. Can anyone look at that chart and honestly say that the foundation was nothing more than an influence-peddling machine? Does anyone believe that the Clintons weren’t aware of this? Does anyone want to argue that this isn’t a textbook case of public corruption?
Well, yes. Reporters do.
Immediately after the Post story ran, we saw headlines such as:
“Surprise, Surprise: The DOJ’s Hillary Clinton Investigation Has Been a Bust,” and “Clinton investigation was baseless from beginning,” and “Another vindication for Clinton as probe reportedly hits dead end.”
The mainstream press has become a less reliable dispenser of facts and arbiter of truth than the public relations department of the Democratic National Committee.
https://issuesinsights.com/2020/01/14/hillary-clinton-vindicated-on-corruption-charges-hardly/
______________
IN OTHER NEWS
BOOKER QUITS THE RACE
By PAUL MIRENGOFF | POWERLINE 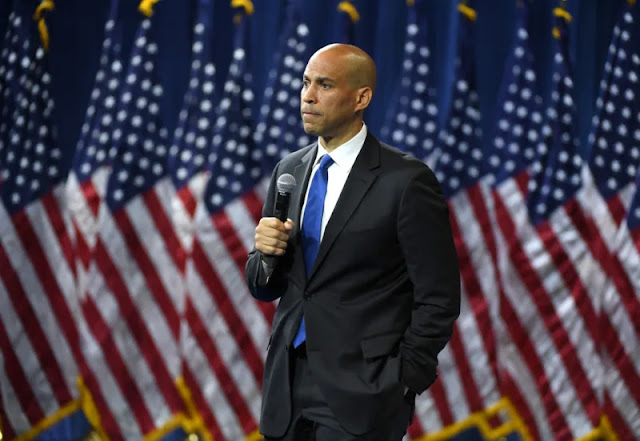 Cory Booker has just announced that he is dropping out of the presidential race. He explained:
I got in this race to win, and I’ve always said I wouldn’t continue if there was no longer a path to victory. Our campaign has reached the point where we need more money to scale up and continue building a campaign that can win — money we don’t have, and money that is harder to raise because I won’t be on the next debate stage and because the urgent business of impeachment will rightly be keeping me in Washington.
With Booker and Kamala Harris out, the only remaining African-American is Deval Patrick. His campaign is so hopeless that some readers might not know he is running. Very few Americans do.
Race mongers may be unhappy about the lack of African-American candidates, but black Democrats probably aren’t. Their candidate is Joe Biden, with Bernie Sanders as the second choice.
I never expected Booker to be the nominee, but I thought he’d make a stronger showing than he did. He’s an impressive speaker and, more than anyone else in the field, seemed like an heir to Barack Obama.
This wasn’t just a matter of race, although that certainly was part of it. Obama was a member of a state champion high school basketball team and a president of the Harvard Law Review. Booker played football for Stanford and was a Rhodes scholar.
Obama was a local activist in Chicago. Booker was an activist in Newark, and became that city’s mayor.
Both served in the Senate. Both have real presence on the stage. Both can weave a compelling yarn.
So why didn’t Booker gain traction? I’m not sure.
I have heard left-wing Democrats complain about his ties to Wall Street. Maybe that was a factor.
Booker is also less adept than Obama at faking sincerity. His trademark hand over heart doesn’t get the job done. If anything, it seems like a “tell.”
Perhaps there is a sense of “been there, done that” when it comes to Obama.
However, I have to think that if Booker had fit the Obama bill better than he did, he would easily be in the mix for the nomination.
Booker can now devote his full attention to the Senate trial of President Trump. That’s unfortunate because Booker will undoubtedly use that stage to grandstand and distort.
Indeed, unless we’re lucky, he will invent. Booker excels at that.
https://www.powerlineblog.com/archives/2020/01/booker-quits-the-race.php

The Democrats Demand Their Recession!