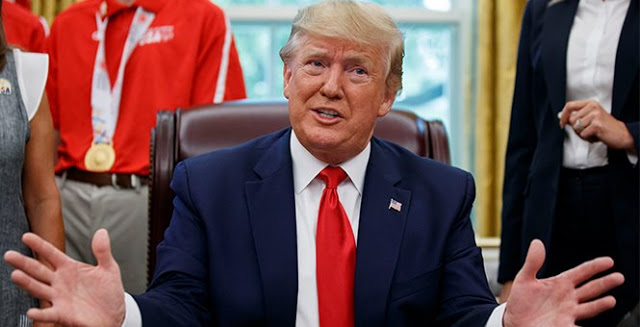 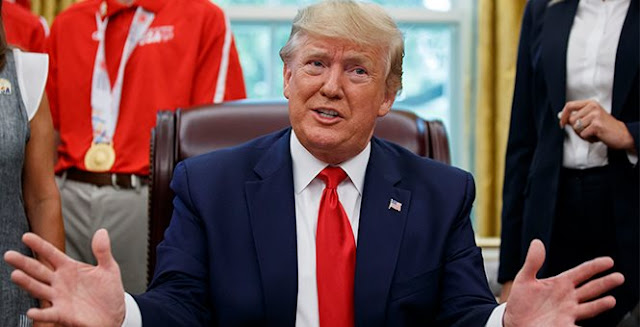 Source: AP Photo/Alex Brando
If you have not learned by now, virtually every Conservative “scandal” in recent memory has been nothing more than leftists projecting their own personal problems onto their political opponents.
Sexism and abuse against women? Meet Bill Clinton and Harvey Weinstein.
Racism? Meet the blackface donning Gov. Ralph Northam and Canadian Prime Minister Justin Trudeau.
Trump pressuring Ukraine to interfere in the 2020 election? Meet the Democrats in May 2018. Yes, the very same Democrats who are now supposedly aghast that President Trump asked the president of Ukraine to look into Joe Biden’s family corruption, actually sent Ukraine a letter saying “U.S. assistance” was at stake unless the Ukrainian government complied with the bogus special counsel Robert Mueller investigation and conducted their own investigation into the president and his former aid Paul Manafort.
Marc Theissen of the Washington Post brought this up, and after seeing what the president actually said to his call to the newly elected president Volodymyr Zelensky, it looks like the Democrats have nothing but egg on their face.
Here’s what Theissen reported:
It got almost no attention, but in May, CNN reported that Sens. Robert Menendez (D-N.J.), Richard J. Durbin (D-Ill.) and Patrick J. Leahy (D-Vt.) wrote a letter to Ukraine’s prosecutor general, Yuriy Lutsenko, expressing concern at the closing of four investigations they said were critical to the Mueller probe. In the letter, they implied that their support for U.S. assistance to Ukraine was at stake. Describing themselves as “strong advocates for a robust and close relationship with Ukraine,” the Democratic senators declared, “We have supported [the] capacity-building process and are disappointed that some in Kyiv appear to have cast aside these [democratic] principles to avoid the ire of President Trump,” before demanding Lutsenko “reverse course and halt any efforts to impede cooperation with this important investigation.”
So, it’s okay for Democratic senators to encourage Ukraine to investigate Trump, but it’s not okay for the president to allegedly encourage Ukraine to investigate Hunter Biden?
The senators in question are defending their actions. Sen. Leahy tweeted:
“So, so wrong. Again. Our letter was about concern **EVEN IN 2018** about WH pressure on Ukraine, to benefit you personally. And unlike you, we have strongly and consistently supported assistance to Ukraine as it struggles with Russian aggression.”
But that seems like a flimsy excuse. The letter clearly shows they were threatening to withhold assistance unless the Ukrainian government did as they demanded. Between this uncovered letter and former Vice President Joe Biden bragging about intimidating the Ukrainian prosecutor, this whole thing is boomeranging on the Dems. Here comes Trump 2020, folks, steamrolling into the White House (again).
—-

Steve Guest
✔@SteveGuest
FLASHBACK to 2018 when Joe Biden bragged about bribing Ukraine with $1 BILLION to fire the prosecutor who was investigating his son, Hunter Biden’s company. 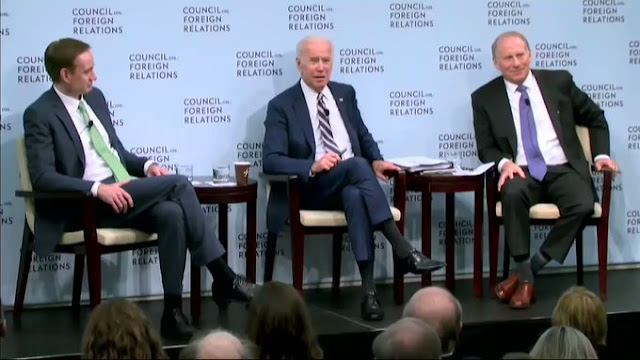 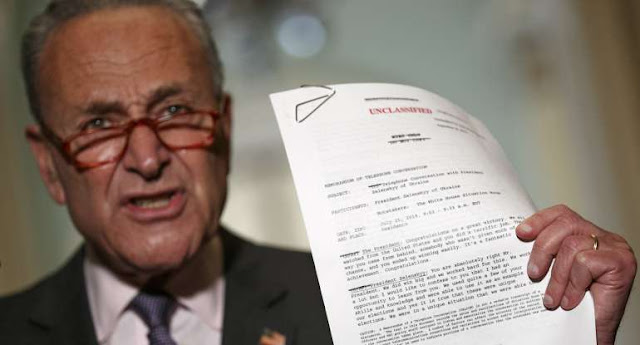 Senate Minority Leader Sen. Chuck Schumer of N.Y. holds up a copy of a White House released rough transcript of a phone call between President Donald Trump and the President of Ukraine as Schumer speaks to the media about an impeachment inquiry on President Trump, Wednesday Sept. 25, 2019, on Capitol Hill in Washington. (AP Photo/Jacquelyn Martin)
Those who have been receiving the news about the whistleblower allegations against President Trump with skepticism rather than glee have mostly focused on the rather tenuous second-hand knowledge nature of the claims. It appears that, until recently, those claims wouldn’t have been allowed in a whistleblower complaint:
— 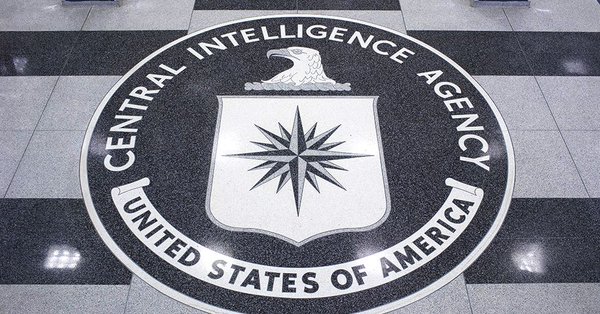 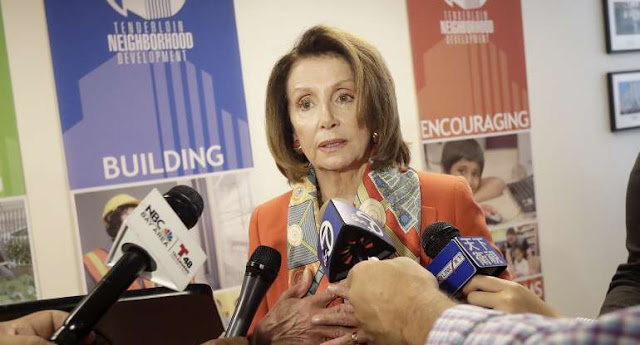 House Minority Leader Nancy Pelosi (D-Calif.) speaks to reporters after a news conference in San Francisco on Aug. 21, 2018. (AP Photo/Jeff Chiu)
Depravity: the state of being morally bad, or an action that is morally bad.
Impeachment depravity: a campaign by Democrat politicos intended to excite the extremist Democrat base and simulate impeachment without the requirement of any grounds for impeachment nor any substantive steps that might trigger real impeachment proceedings.
That’s where we stand in the wake of the fake whistleblower scandal and House Speaker Nancy Pelosi’s empty impeachment inquiry threat, although new developments break minute by minute.
The day Pelosi leveled her toothless threat, Mike Huckabee, guesting on The Story with Martha MacCallum, spoke for millions of loyal Trump supporters when he challenged Democrats to get real and put impeachment to a floor vote.
“Pull the rope, let’s get this engine started,” said the former Arkansas governor.
They won’t pull the rope, because they haven’t got the goods, never have had, and they know it.
The Fastest, Most Premature Impeachment in American History
Instead, what is about to take place is an extended impeachment depravity reel which will illustrate the obscene depths the Democrat Party will sink to in their attempts to undermine the success and rising popularity of President Donald Trump—now enjoying higher poll ratings than Barack Obama had at this point in his presidency.
The impeachment “enactment” will be a perversion of the Constitution and an abomination before the American people. Scores of elected Democrat officials, their operatives, and the leftist media’s stable of bias-infected hosts and analysts will lay down like Stormy Daniels for the production.
Speaker Pelosi didn’t want this. Her ideology may be anathema to conservatism, but she’s politically savvy. Before “whistle-gate” broke she wisely dissuaded her party from green-lighting what will go down in history as a monument to political prurience.
Front and center for this titillation-fest will be co-directors Adam Schiff and Jerrold Nadler, enabled by a production crew comprised of veterans of previous productions: Collusion! Racism! Recession! The stars of the show will be newcomers like Alexandria Ocasio-Cortez, who has stridently proclaimed that expedited impeachment (the real thing, not a flaccid inquiry) is exactly what her district is clamoring for.
Good luck taking this depraved impeachment fantasy into the heartland.
While rank and file Trump supporters will recoil, yell at their television sets, flood comment sections and, in outlier cases, vow armed insurrection if Trump is removed from office, it is the pro-Trump legal and pundit class that will provide the quasi-psychological analysis as this display of Democrat hate-lust plays out. Professionals close to the drama, like Jay Sekulow, Joe diGenova, Victoria Toensing, Mollie Hemingway, Charles Hurt, and many others will provide reality checks when the unhinged passions of the angry left erupt and sully the electoral run-up to 2020.
But there is one core truth that the legions in Trump Country, including 90%+ of Republicans, will not need the print, radio, and broadcast seers to figure out.
The Democrats know they can’t beat Trump. The premiere of Impeachment Depravity proves it.
One theory is that whistle-gate is a covert Democrat operation aimed at mortally wounding Joe Biden’s campaign. If true, that means they don’t think he can win. More conventionally, even if this is not an orchestrated Dem design, polling data suggests that Biden, the real Ukrainian malefactor, is on the way out. Because they don’t think he can win.
Which sets the stage for Elizabeth Warren, about whom Republican spokesperson Reince Preibus recently opined “has no chance of winning in [blue-collar] Michigan, Wisconsin, and Pennsylvania.”
No other Democrat currently in the race, including Bernie Sanders, has a ghost of a chance.
They can’t win, and they know it.
A justified impeachment, for real high crimes and misdemeanors, would be an organic governmental response that arose out of a real threat to the republic. That’s not what’s going on here.
Instead of a crafted alternative message to counter the winning message President Trump has fought hard for and in many cases followed through on, we get from the Democrat Party a sad and sordid traverse through the muck and mire of leftist fantasyland, a sojourn into political depravity performed by a shameless troupe that despairs of returning to power in the near future.
Mark Ellis is the author of A Death on the Horizon, a novel of political upheaval and cultural intrigue. He came aboard at PJ Media in 2015. His literary hangout is Liberty Island. Follow Mark on Twitter.
John Kasich: Pelosi Moved ‘Too Fast’ With Impeachment, Will ‘Further Divide the Country’
https://pjmedia.com/election/impeachment-depravity-inquiry-proves-democrats-know-they-cant-win/
___________________
BUSINESS AS USUAL 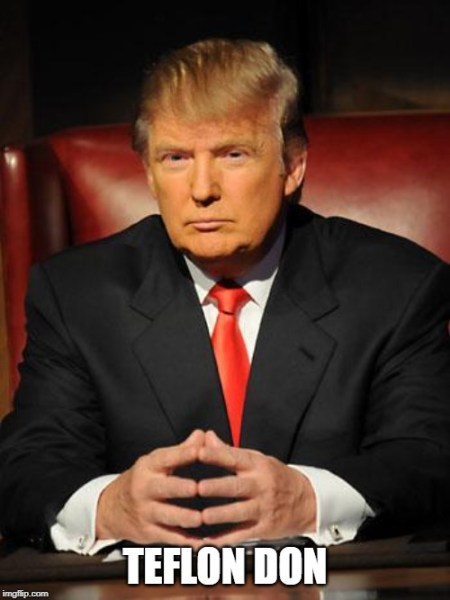 Democrats and the media are making a huge deal out of the supposed notion that the Trump admin did something unusual by storing transcripts on a secure server.
Well, it turns out the Obama admin did the exact same thing.
Obama’s National Security Adviser Susan Rice admitted to it!
From releasing the transcript for the whole world to read to employing the same practice of storing calls with foreign leaders as the Obama administration did, this further solidifies the fact that the Democrats’ and media narrative alleging a cover-up is patently ridiculous.
Stop the madness. This double standard the media and Democrats are employing between President Obama and President Trump is inexcusable.
—————
Susan Rice: Obama Put Call Transcripts On Top Secret Server, Too
By David Marcus 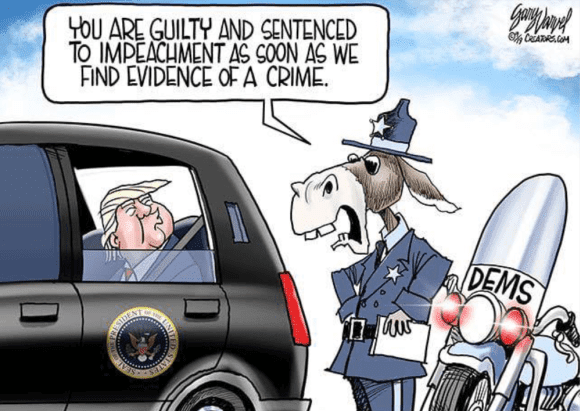 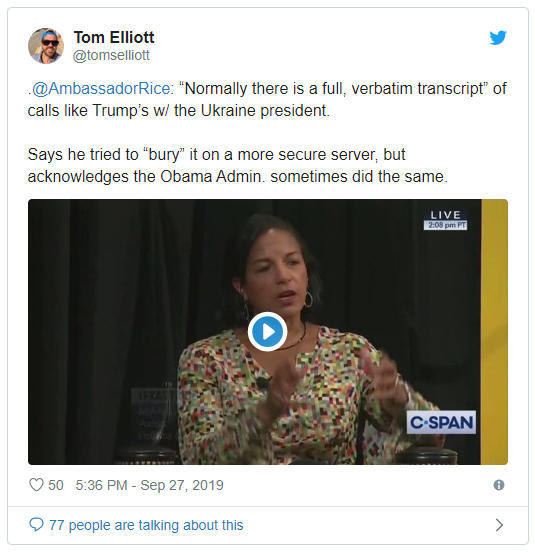 Appearing at the Texas Tribune Festival, Rice was asked how often this practice was engaged in during the Obama administration, but did not answer that question, saying instead, “We never moved them over unless they were legitimately, in the contents classified.” Rice did not explain what standard the Obama administration used to determine what was legitimately classified. She said it is rare, although not impossible, that a presidential conversation could be classified to that highest level.
The revelation from Rice comes amid media reports and comments from political leaders that have painted the use of this top secret server as proof that Trump was trying to cover up the contents of his conversation with the Ukrainian leader, a full transcript of which the administration has now released to the public.
While Rice admitted that the Obama administration also used this server to protect sensitive presidential phone calls, she left open the question of whether the Trump administration used the server in this particular case to save the president from damaging, perhaps even impeachable, comments he made to Zelensky regarding investigations into political rival Joe Biden.
But reporting from ABC News shows that this practice of securing presidential phone transcripts has been in use in the White House since early 2017, after sensitive conversations with foreign leaders were leaked to the press.
From ABC News: “The two calls in early 2017, with leaders from Australia and from Mexico, leaked early in Trump’s administration, and sources said the procedure to store them quickly changed — many calls between the president and world leaders instead were stored in a secure server to avoid leaks. The sources who talked to ABC News did caution that it’s unclear if the calls being stored were done so for national security or for political concerns.”
One source cited by ABC News described the practice as “basically standard operating procedure.”
So from Rice we now know the decision to store the conversation on the top-secret server was not unprecedented, but a decision that Obama’s administration made multiple times as well, using its own discretion, just as the Trump administration has. And from ABC News’ reporting we know that this has been a long-standing practice in the Trump White House to protect against a high level of leaks.
Both of these revelations undermine the theory that in this specific case, some unique and bizarre method was used to hide the transcript and engage in a cover up. Rather, the Trump administration appears to have been engaging in business as usual.

Many Democratic and Republican College Students Think of Each Other as ‘Evil’: Poll