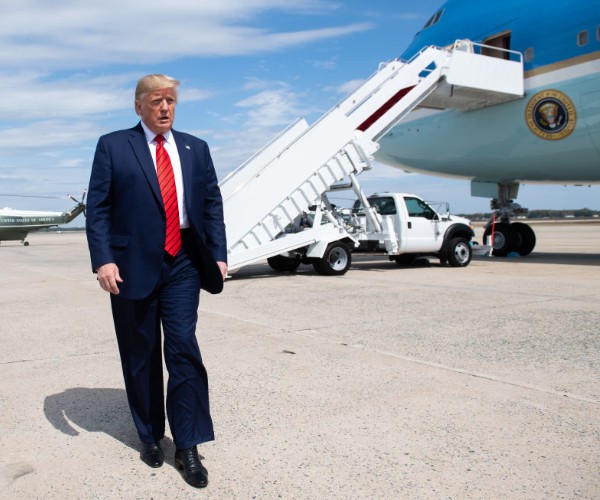 By
U.S. President Donald Trump speaks to the press after arriving on Air Force One at Joint Base Andrews in Maryland, September 26, 2019, after returning from New York. (Saul Loeb/AFP/Getty Images)
While black presidential candidates and their me-too black colleagues in the House of Representatives polish the impeachment boots of their white liberal Democrat and media establishment puppeteers, their black constituents are making historic gains in the Trump economy.
Two years ago, in an August 21, 2017, article in the Chicago Tribune, Heritage Foundation Senior Fellow, Trump campaign economic adviser, and nominee for the Federal Reserve Board Stephen Moore, said that Trump was creating “more jobs and higher incomes for blacks.”
He also cited statistics showing that the black unemployment rate had fallen by a full percentage point; black labor force participation was up; and the number of black Americans with a job had risen by 600,000 from the prior year; and, that preliminary data showed black wages and incomes were up.
That was impressive two years ago!
Two years later, the economic plight of blacks is even better in the Trump economy. According to the Department of Labor’s Bureau of Labor Statistics, the average August unemployment rate for blacks — for 2017, 2018, and 2019 — was 6.5 percent.
That includes the August 2019 black unemployment rate, released September 6, of 5.5%. As Black Enterprise Magazine reported, it was the lowest rate recorded since the Labor Department began tracking the progress back in the 1970’s!
As a September 20, 2019, Wall Street Journal (WSJ) editorial pointed out, citing the then-latest Census Bureau and Labor Department numbers:
In addition to that positive news, the WSJ also reported that a New York Federal Reserve Board national survey showed that the unemployment rate among Americans without a high-school diploma has fallen “steeply over the past three years, and the rate for black women fell in August to the lowest level on record.”
Regarding his record on blacks, Trump summed it up nicely in a September 2018 tweet. He cited the economic and “other things” he had done and asked: “…how do Democrats, who have done NOTHING for African-Americans but TALK, win the Black Vote?”
The same question can be asked today.
Trump is helping blacks economically as noted above, and educationally through support for school choice and historically black colleges and universities.
It could be argued that the black presidential candidates and their black friends in the House of Representatives, and the four Congresswomen known as the “Squad”, have done little if anything for blacks — economically or educationally.
They want to get rid of a president who is doing more to assist their black and Hispanic constituents in those key areas than they, or Barack Obama, ever did. Hopefully it will be noticed.
An August 2016 Gallup poll showed that 52% of blacks said that Obama’s policies had not gone far enough in helping the black community, up from 20% during the 2008 campaign and 32% his first year in office.
Just as a majority of blacks were cognizant of the fact that Obama had not done enough for the black community after eight years, they also will know that these black Democrats are not serving their interests.
Jumping aboard the “Impeachment Express” as it stops at the Democrat plantation might be in the political interests of the black political elite, but it is not in the best interests of black Americans and their children who are benefiting under Trump’s economic, educational, and other policies.
Clarence V. McKee is president of McKee Communications, Inc., a government, political, and media relations consulting firm in Florida. He held several positions in the Reagan administration as well as in the Reagan presidential campaigns. He is a former co-owner of WTVT-TV in Tampa and former president of the Florida Association of Broadcasters. Read more of his reports — Go Here Now.
https://www.newsmax.com/clarencevmckee/african-american-prosperity-trump-employment/2019/09/27/id/934684/
_______________________
RELATED ARTICLE
Life can get better, even amid impeachments
By Michael Barone | Washington Examiner 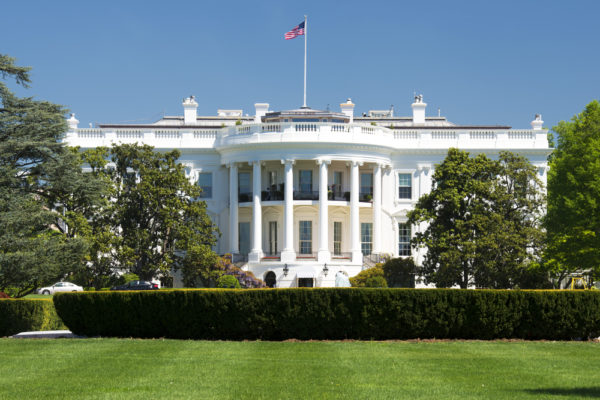 These were the top stories coming out of the White House a month ago for the week of September 6, 2019: The White House’s response to Hurricane Dorian; Vice President Mike Pence’s visit to Poland, Ireland, and Iceland; and the Defense Department’s allocation of $3.6 billion dollars in military construction money to the US-Mexico border wall.

Underneath today’s clash and clang of controversy over presidential impeachment, public policy and personal initiative can slowly and seemingly imperceptibly improve life in America. That was the case two decades ago, amid the swirling arguments over the mostly party-line impeachment of President Bill Clinton and the Senate’s mostly party-line refusal to remove him from office.

This 1998-99 controversy occurred as conservative welfare and crime-control reforms were vastly reducing welfare dependency and crime control in America’s central cities far more than their advocates had expected.

Today, beneath the clamor, one can find evidence of unexpected improvement. During the Trump presidency, manufacturing and blue-collar wages are up, income inequality is lessening, unemployment among blacks and Hispanics is at record lows, disability and food stamp rolls are sharply down, and noncollege-graduate whites are making more economic gains than more educated whites.

All these are reversals of trends that most experts thought would continue indefinitely. They look like fulfillment of Trump’s campaign promises, and they suggest that his policies — the tax cut, trade protections, various methods of discouraging low-skill immigration — have succeeded more than most predicted. Other things may have also contributed: Obama policies, as some Democrats argue, the almost total end of low-skill Mexican immigration in 2007-08, reduction in jobs sent offshore to China.

And something else, which has been widely ignored: “black Americans have been making rapid progress along most important dimensions of well-being since the turn of the millennium,” as Columbia undergraduate Coleman Hughes wrote in his latest article in the invaluable online magazine Quillette.

From 2001 to 2017, Hughes pointed out, the incarceration rate for black men age 18 to 29 dropped by more than 60%. In those years, the teenage birth rate among black women declined 63%. Black life expectancy increased by some 3.5 years.

Between 1999-2000 and 2016-17 the number of blacks awarded bachelor’s degrees rose 82%. A Federal Reserve survey showed 60% of blacks saying they are doing better financially than their parents. 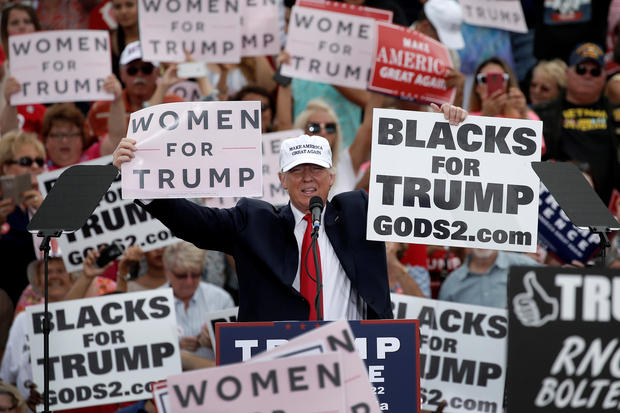 Hughes noted that if you measure blacks’ achievements compared to those of whites, you might conclude that blacks are gaining ground.
But he makes a powerful case for focusing on the improvements among blacks over time. We don’t usually compare improvements (or, as we have seen recently, deteriorations) of white Americans’ behaviors by comparing them to other groups but by comparing them with the same group in the past. And by that measure, the improvements in black Americans’, especially young black Americans’ behaviors over the last generation has been astounding.
They’re a refutation of the intellectual fashion in many quarters, set by the writer Ta-Nehisi Coates several years ago, that blacks in an eternally racist America have always lived a nightmarish existence and always will.
The sharp reduction of violent crime and substance abuse among young blacks over the past 30 years resembles similar reductions among Irish immigrants and their children in the late 19th century.

How do we account for this enormous and beneficial change? It seems far from a coincidence that today’s young blacks grew up in an America shaped by 1990s welfare and crime reform.

There’s certainly evidence that children of single mothers do better when they see their parent as a self-sufficient working person rather than an idle welfare recipient. And it seems likely that adolescents growing up in neighborhoods with sharply reduced crime may be less likely to commit crimes themselves than those coming of age in the crack-infested neighborhoods of the late 1980s.

People tend to do what they think others expect, in two senses of the word: prescriptively (you should do this) and predictively (you’re likely to do this). The 1990s reforms set higher prescriptive expectations and produced higher predictive expectations as well. Barack Obama, with his professional competence and faithfulness to family, was surely a helpful role model.

The lesson is that no matter how nasty politics gets, life on the ground can get better, indeed much better than almost anyone predicted, with help from good public policies and motivated personal effort. 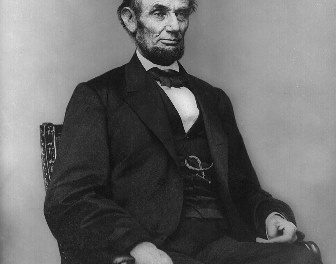 Buck Henry, Who Helped Create ‘Get Smart’ and Adapt ‘The Graduate,’ Dies at 89