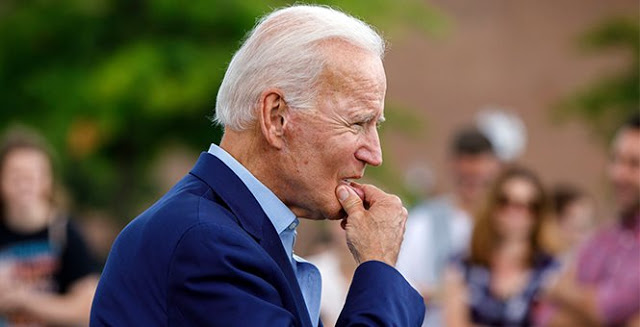 By Matt Vespa
Source: AP Photo/Michael Dwyer
Former Vice President Joe Biden is on the struggle bus. He’s ahead in the polls, yes. But he’s also become a gaffe machine. From not knowing which is his current location on the campaign trail to telling fake war stories, Joey has done it all in less than a week. We have a long way to go before Election Day 2020. And a frontrunner who can’t get simple things right has to have Democrats a bit uneasy.
Biden is at the top of the heap because of his name recognition and this notion that he can attract white working-class voters. He can do that, but not with this Democratic Party.
Biden will be forced to answer about abortion up until the moment of birth, health care for illegal aliens, and open borders. He will have to adopt or appear to be not hostile to those positions—all of which are unpopular. Even health care is a crapshoot now that Democrats appear to be totally fine with nuking private health insurance in their quest to adopt Medicare for All across the country, which will lead to the mother of all tax increases.
Yet, before that all happens, we have to discuss this war story fiasco. The former VP told this anecdote at a campaign stop in New Hampshire this week—and it’s pretty much all false. Even The Washington Post couldn’t spin it [emphasis mine]:
Joe Biden painted a vivid scene for the 400 people packed into a college meeting hall. A four-star general had asked the then-vice president to travel to Konar province in Afghanistan, a dangerous foray into “godforsaken country” to recognize the remarkable heroism of a Navy captain.
Some told him it was too risky, but Biden said he brushed off their concerns.
“We can lose a vice president,” he said. “We can’t lose many more of these kids. Not a joke.”
The Navy captain, Biden recalled Friday night, had rappelled down a 60-foot ravine under fire and retrieved the body of an American comrade, carrying him on his back. Now the general wanted Biden to pin a Silver Star on the American hero who, despite his bravery, felt like a failure.
“He said, ‘Sir, I don’t want the damn thing!’ ” Biden said, his jaw clenched and his voice rising to a shout. “ ‘Do not pin it on me, Sir! Please, Sir. Do not do that! He died. He died!’”
The room was silent.
“This is the God’s truth,” Biden had said as he told the story. “My word as a Biden.”
Except almost every detail in the story appears to be incorrect. Based on interviews with more than a dozen U.S. troops, their commanders and Biden campaign officials, it appears as though the former vice president has jumbled elements of at least three actual events into one story of bravery, compassion and regret that never happened.
What’s worse is that Biden pretty much doubled down on it, saying that the essence of this war story that never happened was true. Julio Rosas at The Washington Examiner has more[emphasis mine]:
Biden appears to have recalled inaccurately a 2011 awards ceremony in Afghanistan’s Wardak province, when he pinned the Bronze Star on Army Staff Sgt. Chad Workman after Workman had attempted to save a friend from a burning vehicle.
“In the space of three minutes, Biden got the time period, the location, the heroic act, the type of medal, the military branch and the rank of the recipient wrong, as well as his own role in the ceremony,” the Washington Post reported, adding he appears to have muddled three different stories into one.
Talking with the Post and Courier on Thursday, Biden said he did not read the Post’s report.
“I don’t understand what they’re talking about, but the central point is it was absolutely accurate what I said,” Biden said. “He refused the medal. I put it on him, he said, ‘Don’t do that to me, sir. He died. He died.’”
“There was one that relates to the forward-operating base in Afghanistan that I went to and a separate one where I went on the streets of Afghanistan where a young man pulled someone from a burning humvee,” Biden said.
Joe, it was false. It either happened or it didn’t—and it looks like this story didn’t happen.
Sen. Richard Blumenthal (D-CT) also got into some hot water during his 2010 Senate race, where he said he served in Vietnam. He didn’t.
Disgraced anchor Brian Williams, one of the founding fathers of fake news, also told some war stories about Iraq, one of which was a harrowing tale about being on a helicopter that was taken down by rocket-propelled grenade fire. That was a lie.
https://townhall.com/tipsheet/mattvespa/2019/08/30/joe-biden-told-a-fake-war-story-but-says-the-essence-of-it-was-true-n2552431?utm_source=thdailypm&utm_medium=email&utm_campaign=nl_pm&newsletterad=&bcid=1b87ed489cb499e9d52de389e64c7f01&recip=19399969

Did you ever love America