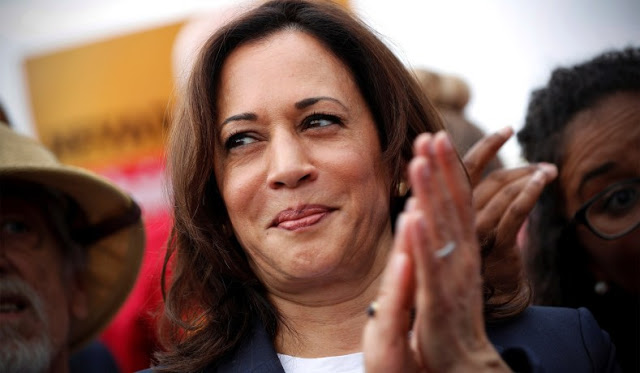 By
Sen. Kamala Harris joins a demonstration with striking McDonalds workers in Las Vegas, Nev., June 14, 2019. (Mike Segar/Reuters)
Her tenure as San Francisco’s chief prosecutor reveals much about her character and judgment.
In 2005, the sharp-elbowed, ambitious district attorney of San Francisco had the opportunity to correct an all-too-common prosecutorial violation of duty that the leading expert on prosecutorial misconduct found “accounts for more miscarriages of justice than any other type of malpractice.” Rather than seize the opportunity, she did nothing. The prosecutor went on to become state attorney general and now represents California in the United States Senate. If she can persuade enough voters to support her in next year’s Democratic presidential primaries, Kamala Harris will contend with President Trump in 2020 for the highest office in the land.
To understand Harris’s 2005 moral failure, we must go back to 1963. That year, the United States Supreme Court affirmed the unique constitutional position of criminal defendants. In Brady v. Maryland, 373 U.S. 83 (1963), the Court announced that “the suppression by the prosecution of evidence favorable to an accused upon request violates due process where the evidence is material either to guilt or to punishment, irrespective of the good faith or bad faith of the prosecution.” This is because “society wins not only when the guilty are convicted, but when criminal trials are fair”; accordingly, “our system of the administration of justice suffers when any accused is treated unfairly.”
Despite half a century of Brady’s regime, cavalier (and sometimes willful) prosecutors routinely violate its command, resulting in untold numbers of court decisions bemoaning these violations, reversals of criminal convictions, and, at worst, the imprisonment of innocents. In New York, the causal link between Brady violations and “wrongful convictions” compelled the chief judge of the New York Court of Appeals to require criminal trial judges to “issue an order to the prosecutor responsible for the case to timely disclose exculpatory evidence favorable to the accused — called Brady material.” Indeed, former chief judge Alex Kozinski of the United States Court of Appeals for the Ninth Circuit, which is headquartered in San Francisco, wrote in a 2013 dissenting opinion from a denial of a rehearing en banc that “there is an epidemic of Brady violations abroad in the land.”
While it was laudable of Chief Judge Kozinksi to take judicial notice of systemic prosecutorial misconduct, criminal defense lawyers have long known what Professor Bennett L. Gershman observed in Shakespearean fashion, “Brady, one may correctly conclude, is ‘more honored in the breach than the observance.’”
Accordingly, it is deeply troubling that in 2005 District Attorney Harris ignored the recommendation of her own assistant district attorneys that she adopt a “Brady policy” of “disclos[ing] past misconduct by law enforcement in order to help ensure defendants received a fair trial,” as the Wall Street Journal recently reported. Caving to the collective interests of public-sector unions that opposed the policy, Harris “appeared to lose interest” in protecting the individual rights of the accused. She neither ratified nor implemented the proposed reform.
Her decision to do nothing came back to haunt Harris in 2010 when, as the Journal explained, “a San Francisco police crime-lab technician was found to be skimming cocaine from evidence for personal use” that resulted in about 1,000 cases being “dismissed or dropped because of tainted drug tests.” San Francisco Superior Court judge Anne-Christine Massullo castigated Harris for failing to “have in place policies and procedures designed to discover and produce exculpatory information” and failing “to produce exculpatory information actually in” the district attorney’s “possession” about the rogue lab tech.
Had Harris accepted the pleas of her subordinates to adopt the 2005 Brady policy, this scandal would have almost certainly been avoided. After a judicial reprimand, 1,000 criminal cases terminated, and unfavorable media coverage, Harris finally “scrambled to pull together a Brady policy.”
Harris’s tenure as San Francisco’s chief prosecutor reveals much about her character and judgment.
In 1940, United States attorney general Robert Jackson told a gathering of federal prosecutors: “The prosecutor has more control over life, liberty, and reputation than any other person in America. His discretion is tremendous. . . . While the prosecutor at his best is one of the most beneficent forces in our society, when he acts from malice or other base motives, he is one of the worst.” If Harris, as district attorney, could not muster the basic decency and sense of fairness to respect the constitutional rights of criminal defendants whose liberty was at risk, how can we possibly expect her, as president, to honor constitutional rights that involve less than the deprivation of freedom but so much of what it means to be American?
CRAIG TRAINOR is a criminal-defense and civil-rights attorney in New York City. He previously served as a prosecutor and as a law clerk to a federal judge. Twitter: @TrainorLaw.
https://www.nationalreview.com/2019/06/kamala-harris-record-district-attorney-san-francisco/

No Principles, No Dignity, No Power, No Deterrence (Neo-con commentary)