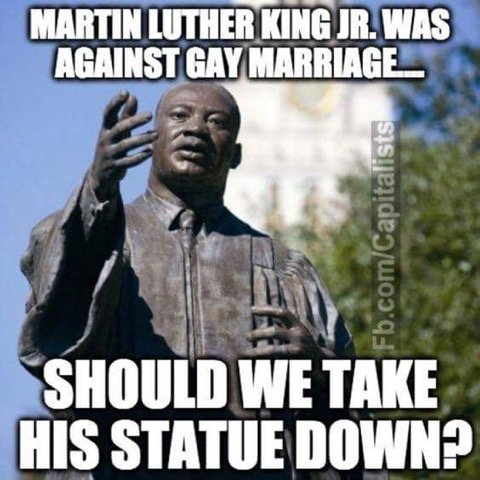 By Raynard Jackson
As we celebrate the national birthday holiday for Dr. Martin Luther King, Jr., I can’t help but to ponder what he would say about the current state of Black America specifically, and America in general.
I am sure he would be livid at how white liberal’s handpicked Black “leaders” have been bought and paid for by them and their radical agendas; like the radical homosexual and transgendered movements, the promotion of foreigners and illegals taking jobs from Americans, and the total mismanagement and political liberalization of our HBCUs.
HBCUs are fastly being taken over by the radical homosexual and transgendered movements and other radical liberal doctrines like feminism.
King, a Morehouse graduate, would disown his alma mater if he were here today.
Let me refer you to a column I wrote back in 2005 titled, “Letter to Dr. King.”  This is one of my best pieces of writing in my more than twenty years of being a columnist.
Unfortunately, things for Blacks have gotten worse since the death of Dr. King.
I don’t get into arguments on whether Dr. King was Republican or not; I think it is totally irrelevant.  I focus only on what we know, his public record.
And what we know is Dr. King didn’t take a bullet to his head for the media appointed Black leaders to be bought off by white liberals and white feminists.
Dr. King didn’t give up his life to promote the radical liberal homosexual and transgendered agenda.
Dr. King fought for Blacks in America, not “people of color.”  He wasn’t asking for special treatment; he was asking for equal treatment.
The U.S. Constitution had already guaranteed Blacks equal rights; the laws simply were not being enforced.  Blacks were not asking to have special rights created for them, like the homosexuals; they were saying, enforce the law.
I find it astonishing that the Democrat candidates for president have been allowed by liberal Blacks to conflate the radical liberal homosexual agenda, amnesty for illegals, and feminism into a modern-day Civil Rights agenda.
These candidates have not once discussed the breakdown of the Black family because of liberal social engineering, i.e. welfare from the sixties; there has been no discussion of Black entrepreneurship; or not one word uttered about the state of HBCUs.
But let one illegal kid die in ICE’s custody and the whole liberal world loses its collective mind; but when twenty babies are killed in one weekend of violence in places like Chicago or Baltimore, these same liberals get a severe case of laryngitis.
These white liberals have forced their sycophant Black followers to aggressively promote their radical homosexual, transgender, and feminist agenda; despite the fact that Black homosexuals, transgenders, and feminists face more racism within these radical groups than they do in mainstream society.
Liberals are by far the most racist group in the entire U.S.; just look at liberal Hollywood as exhibit A.
King was singularly focused on equal opportunity for Blacks based on the Constitution; not equal outcome.
King did not have a problem with segregation or segregated neighborhoods.  He had a problem with Blacks being denied the opportunity to move to a white neighborhood solely based on their skin color.
King would not be concerned with how few Blacks are coaching in professional sports like the NFL or NBA; or how few Blacks were in their league offices; or how few Blacks own franchises.
He would be more concerned about why Blacks continue to financially support entities like this and why Blacks continue to work under these conditions knowing that they have the real power in this relationship.
Blacks make up about 70% of all players in both the NFL and NBA.  But yet these players have said and done nothing to effectuate change regarding the lack of diversity within management and ownership.  Colin Kaepernick has laryngitis when it comes to this issue and his knees seem incapable of bending for an issue like this.
As I say, weak people take strong positions on weak issues!!!
Other groups stay singularly focused on the issues that affect their respective communities.  When do you hear Asians or Hispanics talking about people of color?
Blacks are the only group that make other people’s issues their issues, with absolutely no reciprocity.
King would be appalled at this behavior by these quasi Black leaders.
King was not a global leader, but rather, he was a Black leader in America who had a global impact.  There is a big difference between being a global leader and a leader that impacts the globe!
You have cities like Baltimore, Chicago, Detroit that have been run by liberal Democrats for generations uninterrupted and Blacks have been devastated by these liberal policies.
Where are the holy cries of righteous indignation from Black leaders?
Blacks are being told that Susie has two mommies and Johnny has two daddies; and we wonder why Black on Black crime is off the charts?
Black women are being told by white feminists that they don’t need a man to help raise their children; even though they needed a man to make those same children.
You only dream when you are sleep.  It’s high time for Blacks to wake up and rekindle the dream; and that dream has to start with getting back to our conservative values in the Black community and to once and for all reject the insidious radical liberalism that has nearly destroyed the Black community.

Conservatives, herein lies your opportunity to engage with the Black community!
Raynard Jackson is a Pulitzer Award nominated columnist and founder and chairman of Black Americans for a Better Future (BAFBF), a federally registered 527 Super PAC established to get more Blacks involved in the Republican Party.
http://thyblackman.com/2020/01/19/kings-dream-has-turned-into-a-nightmare/

Biden: Constitution Doesn’t Say ‘Anyone Can Own a Weapon,’ Each Amendment Has a ‘Limitation’

Women and Power and Pelosi and Gabbard