Let’s Put the Climate Hoax Kids In a Time Out 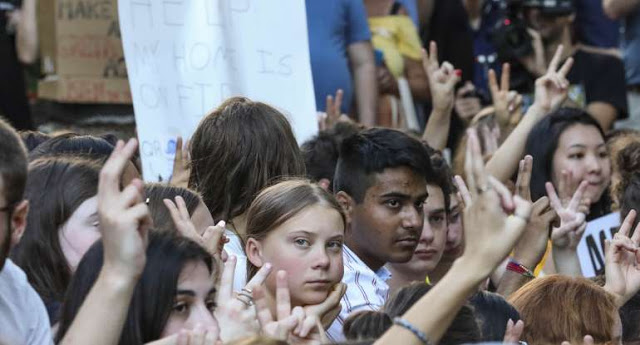 BY
(AP Photo/Bebeto Matthews)
Enough with the Adolescent Human Shields
Climate hoaxer truant Greta Thunberg has dominated the news for the last several days, largely thanks to the fact that none of the adults around her seem to care if she gets an education. In fact, the little spectrum girl finally admitted that her antics are mostly about having an excuse to play hooky from school.
Time: “Why should we study for a future that is being taken away from us. That is being sold for profit.”
Last month, I wrote that scaring young people into believing that climate change is going to kill them is child abuse. The adults responsible for spreading this hysterical propaganda should be rounded up and jailed. They use children as messengers to provide some cover for their fantastical and nonsensical claims.
When they aren’t unleashing the brats to fill news cycles with lies about weather, the adults are even more insane. The New York Times published a “News Analysis” article this past weekend that suggested likening forest fires to Nazi war crimes:
One day, a few years from now, they imagined Brazil’s president, Jair Bolsonaro, being hauled to The Hague to stand trial for ecocide, a term broadly understood to mean the willful and widespread destruction of the environment, and one that, they hope, will eventually be on par with other crimes against humanity.
The only real threat Earth faces at the moment is the fascist lust for a global new world order that the climate hoaxers are fighting for. They want to put children’s faces on their movement to lull people into not realizing they are giving up freedoms for no reason.
The hoaxers are awful people, but they’re triggered by people who enjoy steak and burgers.
My menu for the week is set.
Ouch.
A lot of Democratic presidential candidates are trailing in their home states. That’s bad.
https://pjmedia.com/trending/the-morning-briefing-lets-put-the-climate-hoax-kids-in-a-time-out/?utm_source=pjmedia&utm_medium=email&utm_campaign=nl_pm&newsletterad=&bcid=227841a8b1ca836b99e21ea36efa6859&recip=28551147

The Wisdom of John Adams

Is Your Mask Keeping You Safe? – ScoopTV: Episode 5