No Relief for Conservatives in Silicon Valley

At the company’s 2019 annual shareholder meeting, he told a concerned investor that her conservative friend – an Apple employee – could come directly to him for protection against discrimination related to that employee’s politics.

The notion that all of the approximately 80,000 American Apple employees can simply ring up Cook and expect personal attention should they be persecuted for their politics is ludicrous. Add to that incredulity that Cook is an ardent liberal who has overseen the company flexing its corporate muscle for a leftist agenda. And Silicon Valley as a whole is well-known for its liberal bias in which conservatives have been fired for their values – even when it had nothing to do with their workplace performance.

“It stands to reason,” writes the National Center’s Free Enterprise Project (FEP) Director Justin Danhof, Esq., “that conservatives in the Valley have real reason to fear for their job security.”

But, as Justin explains in a commentary published by The Federalist, despite “ample evidence that conservative individuals may face discrimination at Apple” and a FEP proposal to help protect the employees, Apple’s “lawyers recoiled with vigor.”

What’s worse is that the federal U.S. Securities and Exchange Commission (SEC), which could have forced Apple to keep FEP’s shareholder proposal on its annual meeting agenda, allowed it to be removed.

Justin charges that “the SEC is now deciding the fate of shareholder resolutions based on subjective, and decidedly left-leaning, biases.”

In rejecting our resolution, the SEC made a mockery of the shareholder proposal process. It’s time for Congress to take notice of the role the SEC plays in shaping corporate proxy ballots – and how that process is empowering corporate America’s slow march to the left.

Our proposal sought to have the Silicon Valley mainstay amend its equal employment opportunity (EEO) policy to protect individuals from viewpoint discrimination. We thought it a simple request. After all, Apple – as with most major American corporations – already has protections in place based on race, gender, and sexual orientation…

The SEC’s approval of Apple’s abhorrent behavior is bad on its face, but underneath the surface, it’s much more sinister. That’s because our resolution is nearly identical to a prior liberal proposal that the SEC supported.

If Cook were truly committed to a workplace free of political discrimination, Justin notes that he could have directed Apple lawyers to adopt the FEP proposal that has already been accepted by major American companies including Walmart and Coca-Cola. Instead, they fought it. 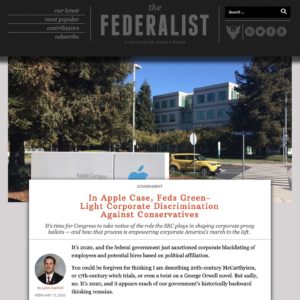 The post No Relief for Conservatives in Silicon Valley appeared first on The National Center.