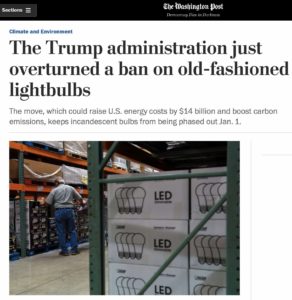 By stopping an increase in the regulatory standards for incandescent light bulbs, the Washington Post reported that the Trump Administration gave the commonly used bulbs “a new lease on life.”

And the newspaper’s report cited the National Center’s praise for this decision.

Increased energy efficiency standards set to go into effect on January 1 would have essentially banned traditional incandescent and halogen bulbs by raising the cost of their manufacture by approximately 300%. After an analysis of the economic impact of the enhanced rules – and public comment from organizations including the National Center and its Project 21 black leadership network – the U.S. Department of Energy announced a halt to the increased regulation on December 20.

This saved popular bulbs such as those used in recessed and track lighting, bathrooms, chandeliers and three-way bulbs found throughout American homes.

In announcing the decision, Secretary of Energy Dan Brouillette said:

Today the Trump Administration chose to protect consumer choice by ensuring that the American people do not pay the price for unnecessary overregulation from the federal government. Innovation and technology are already driving progress, increasing the efficiency and affordability of lightbulbs, without federal government intervention. The American people will continue to have a choice on how they light their homes.

The government will continue to fund the research and development of light-emitting diode (LED) bulbs that are more energy efficient but still lack some of the features and conveniences that still make incandescent bulbs popular.

To read all of the National Center’s statement on the decision, click here.

To read the public comment submitted on behalf of the National Center, Project 21 and other free-market organizations, click here.

To read the entire Washington Post article – that was syndicated to papers including the Keene (NH) Sentineland St. Augustine (FL) Record, click here.

The post Popular Light Bulbs Get “New Lease on Life” appeared first on The National Center.