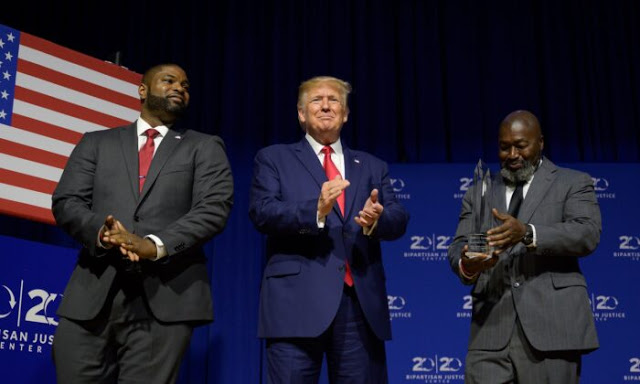 BY
President Donald Trump (C) is awarded the Bipartisan Justice Award by Matthew Charles (R), who was released from federal prison through the First Step Act, prior to delivering remarks at the 2019 Second Step Presidential Justice Forum in Columbia, South Carolina on Oct. 25, 2019. (Jim Watson/AFP via Getty Images)
Republican President Donald Trump was awarded the Bipartisan Justice Award on Oct. 25 for his work on the First Step Act.
Trump thanked lawmakers from both sides who worked with him on the legislation, which he signed late last year, and specifically thanked Senators Lindsey Graham (R-S.C.), Tim Scott (R-S.C.), and South Carolina Sen. Gerald Malloy, a Democrat.
“Last year we brought the whole country together to achieve a truly momentous milestone. They said it couldn’t be done,” Trump told the crowd at the 2019 Second Step Presidential Justice Forum at Benedict College in South Carolina, where he received the award and met with people released after the act was passed.
“We assembled a historic coalition. We had them so liberal you wouldn’t believe it, we had them so conservative you wouldn’t believe it.”
Trump said he plans future efforts on the criminal justice reform front.
“We call it the First Step Act. I like the idea of calling it criminal justice reform. But this allows a second step and a third act,” he said.
Trump introduced several people to the crowd who benefited from the act, including Alice Johnson, who had been serving a life sentence for cocaine trafficking, and Tenesha Bannister, who served 16 years of a 23-year sentence for possession of drugs with intent to distribute. 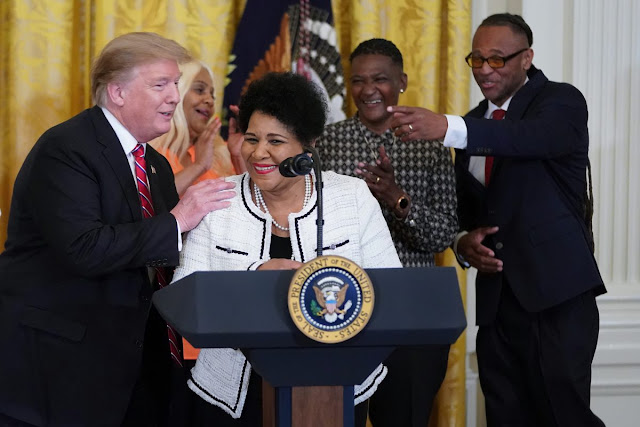 Alice Marie Johnson, who had her sentence commuted by President Donald Trump after she served 21 years in prison for cocaine trafficking, speaks during a celebration of the First Step Act in the East Room of the White House on April 1, 2019. (Chip Somodevilla/Getty Images) 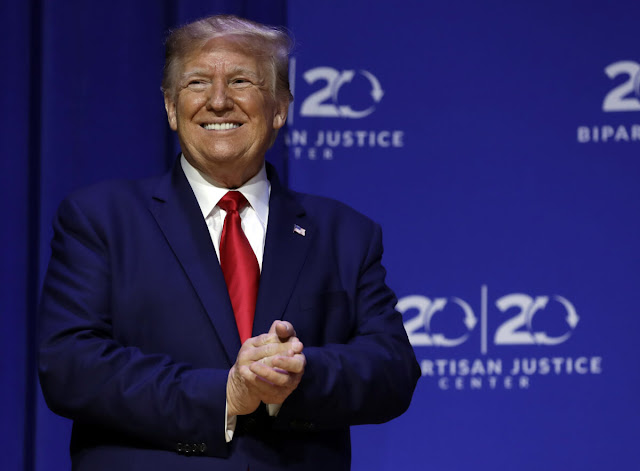 President Donald Trump arrives to speak to the 2019 Second Step Presidential Justice Forum at Benedict College in Columbia, S.C. on Oct. 25, 2019. (Evan Vucci/AP Photo)
Trump said hearing stories he thought displayed injustice motivated him to pursue reform in the criminal justice system.
“We rolled back the provisions of the 1994 Clinton crime law, which disproportionately harmed the African American community,” he said, prompting cheers.
Trump later said the strong economy helps people leaving prison.
“As a result of our tax cuts, our regulatory cuts … the energy reforms, our economy is booming. Nothing better for former prisoners that are coming home, when there’s very low unemployment,” he said.
“They come out and are being hired. I have people who are doing the hiring saying these people are incredible. Maybe our economy is the best criminal justice reform of all.”
Before Trump’s speech, Matthew Charles, one of the first prisoners released by the act, spoke to the crowd before introducing the president.
“I would not be a free man today if Donald J Trump had not supported and signed the First Step Act,” he said. 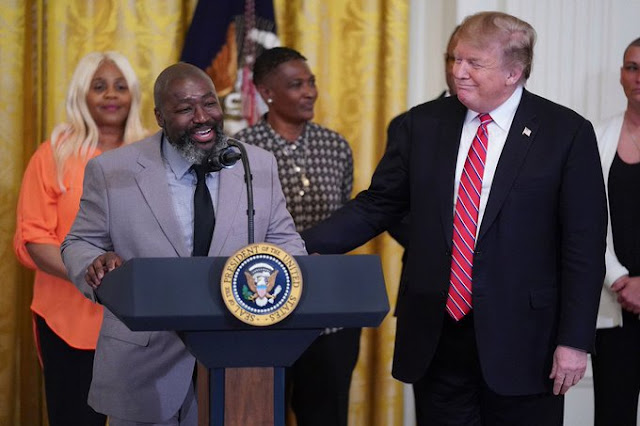 Matthew Charles, one of the first prisoners released by the act, speaks during a celebration of the First Step Act in the East Room of the White House on April 1, 2019. (Chip Somodevilla/Getty Images)
The Department of Justice told Congress in a hearing last week (pdf) that over 1,500 inmates have been released because of the sentencing reductions in the act and another over 3,000 were released because of the re-programming of time off for good behavior.
Another 95 inmates were able to obtain “compassionate release,” the Bureau of Prisons said, and some 2,000 inmates were on home confinement under the expanded use of home confinement for low-risk offenders authorized by the act.
Follow Zachary on Twitter: @zackstieber
https://www.theepochtimes.com/president-donald-trump-awarded-bipartisan-justice-award-for-first-step-act_3127916.html
______________
RELATED STORY
‘Grey’s Anatomy’ Actor Thanks Trump for First Step Act, Criticizes Obama
BY JACK PHILLIPS | The Epoch Times | April 6, 2019 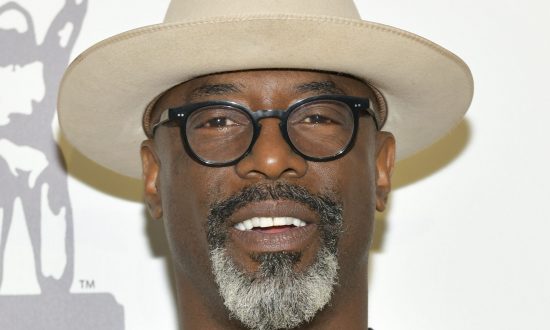 Isaiah Washington, the “Grey’s Anatomy” actor, lauded President Donald Trump for the First Step Act and lashed out at former President Obama for a lack of action.
“I voted for 44 (Obama) twice. I even checked my emails in his Senate Office while lobbying for Salone to be given another chance to rebrand,” Washington, who also appeared in Spike Lee films like “Clockers” and “Crooklyn,” wrote on Twitter.
He added, “Not once in 8 years was I given any support regarding Africa or the Black Agenda, but 45 (Trump) invites me to the WH to celebrate the #FirstStepAct.”
Washington added that the First Step Act has initiated the “end of mass incarceration.”
“Those who know, know that I’m not a Democrat or a Republican. I will work w/h anyone as long as things get done,” he also wrote.
Last year, Congress passed the First Step Act, which gives judges more discretion when sentencing drug offenders while favoring rehabilitation efforts over incarceration.
This week, Trump hosted a celebration at the White House with ex-convicts who got an early release under the act.
“Two months ago, I was in a prison cell. And I’m in the White House. That’s continuing to make America great again,” said Gregory Allen, one of the ex-convicts, who was introduced by Trump, reported The New York Post.
Alice Marie Johnson, who had her sentence commuted, was also present at the ceremony on April 1.
“I want to thank our incredible President Donald John Trump,” Johnson said. “I also want to thank the media for being so kind to me.”
So far, according to the report, about 500 inmates have been released.
Trump noted that the law undoes a policy under former President Bill Clinton that he said has disenfranchised African Americans. 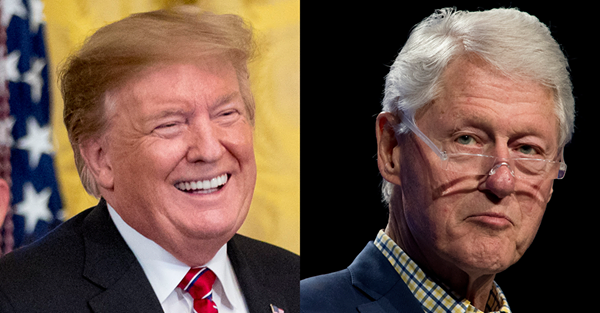 “Finally, the law rolls back provisions of the 1994 Clinton crime law that was so devastating to so many, and that disproportionately impacted the African American community,” Trump said, reported the Washington Examiner.
“Nobody believes how much, and now they understand it. In less than four months more than 500 people with unfair sentences have been released from prison and are free to begin a new life.”

“It’s happening, and it’s happening fast, and it’s a lot for some people to understand,” Trump also said at the event, adding that some 16,000 inmates have been enrolled in drug treatment programs.
https://www.theepochtimes.com/greys-anatomy-actor-thanks-trump-for-first-step-act-criticizes-obama_2863194.html 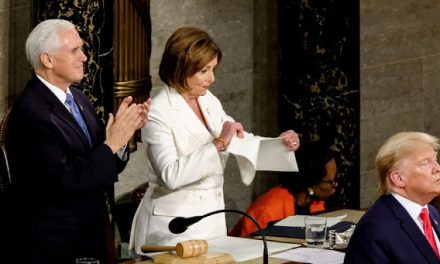 Trump takes on ‘radical left’ in defiant and dramatic State of the Union address; Pelosi rips up speech