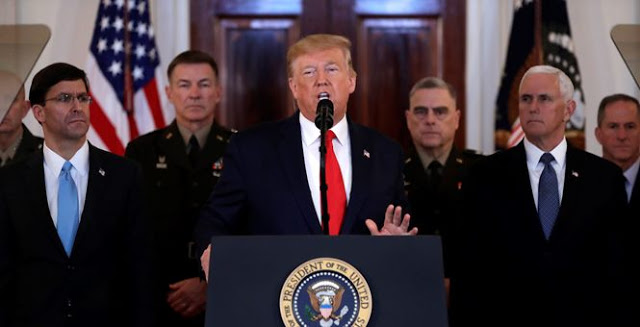 Katie Pavlich| Townhall.com
Source: (AP Photo/ Evan Vucci)
President Trump addressed the nation from the White House Wednesday morning less than 24-hours after Iran launched more than a dozen missiles at al-Asad airbase in Iraq. As he spoke Vice President Mike Pence, Secretary of State Mike Pompeo, Secretary of Defense Mark Esper and the Joint Chiefs of Staff stood behind him.
“As long as I am President of the United States, Iran will never be allowed to have a nuclear weapon,” President Trump said at the start of his remarks. “The missiles fired last night at us and our allies were paid for with the funds made available by the last administration.”
“Our great American forces are prepared for anything. Iran appears to be standing down,” he continued, reporting no casualties from the attack. “The United States will immediately impose additional punishing economic sanctions on the Iranian regime.”
President Trump called on European allies and China to abandon the Iranian nuclear agreement once and for all. He went after the Obama administration, slammed appeasement of the regime and repeatedly noted Iran’s violent behavior.
“Those days are over. Iran has been the leading sponsor of terror and their pursuit of nuclear weapons threatens the civilized world,” he said. “Iran’s hostilities substantially increased after the foolish Iran nuclear deal was signed in 2013, and they were given $150 billion, not to mention $1.8 billion in cash.  Instead of saying “thank you” to the United States, they chanted ‘death to America.’ In fact, they chanted “death to America” the day the agreement was signed. Then, Iran went on a terror spree, funded by the money from the deal, and created hell in Yemen, Syria, Lebanon, Afghanistan, and Iraq.”
On the killing of Iranian terror leader Qassem Soleimani, President Trump justified the strike and said, “He should have been terminated long ago.”
“To the people and leaders of Iran: We want you to have a future and a great future, one that you deserve, one of prosperity at home, and harmony with the nations of the world. The United States is ready to embrace peace with all who seek it,” he said.
https://townhall.com/tipsheet/katiepavlich/2020/01/08/trump-remarks-white-house-n2559136?utm_source=thdailypm&utm_medium=email&utm_campaign=nl_pm&newsletterad=&bcid=1b87ed489cb499e9d52de389e64c7f01&recip=19399969

Did the Mullahs Set Sollemini Up?

And In Other News, Here is Tesla’s Latest Offering [Vanity]