There is such a thing as “white privilege,” says Project 21 member Rich Holt, but he explains that it’s not the racist conspiracy the left likes to use to keep black Americans voting for liberal candidates. That being said, Rich also notes that too many conservatives deny its existence at their peril.

The difference between liberal myth and reality is certainly less sexy than the victims’ tale so comforting to the liberal conspiracist. In real world America, the “white man” isn’t out to get his darkened brethren in a racist conspiracy meant to ensure his supremacy. The results of research have shown us that the “real” racism that exists is actually more subtle and fixable.

Examples of such bias, which he points out can be statistically observed, include:

We have to recognize as a society that white privilege does exist. But, we must also recognize that there’s a difference between bias and a white supremacist conspiracy worthy of an Alex Jones exposé.

In these situations, he suggests that “[a] simple conversation and an honest dialog can solve a lot of problems.”

“We must also dig deeper and speak out against racism denial,” Rich adds. “In conservative circles, I don’t find racists too often. What I see are racism deniers.”

Conservatives willing to call out bad behavior – whether such behavior is intentional or not – can prove their sincerity with black folk. And liberals can be exposed for their lack of interest or action in the process:

No liberal wants to solve this problem. They need it too bad. They need to point at racism and then point to a white conservative and say “see that white devil… he’s the bad guy. He’s a racist. He’s the problem.”

“Our black president did little, to nothing, to address black issues especially ones involving the judicial system,” Rich remarks. “The landmark civil rights changes in the current century are conservative successes achieved by alleged racists.”

Rich also notes that the Trump Administration and conservative lawmakers have accepted Project 21’s “Blueprint for a Better Deal for Black America,” while liberals have yet to embrace its 57 public policy recommendations for helping blacks achieve the American Dream. In fact, the Blueprint contains specific recommendations for issues such as criminal justice reform and educational issues such as AP programs.

To read all of Rich’s commentary – “I Made a Right Winger Cry” – at the Western Free Press website, click here. 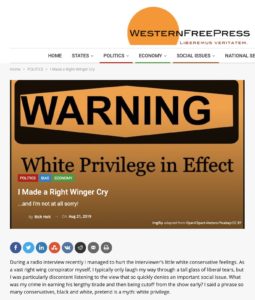 The post Preventing Privilege is a Valuable Virtue for Conservatives appeared first on The National Center.