By Beth Whitehead | The Federalist

Vandals and insurrectionists attempted to breach the Arizona capitol, torched pregnancy clinics, and shut down freeways.

Left-wing violence predictably erupted over the weekend after the Supreme Court ruled 5-3-1 on Friday to overturn Roe v. Wade. While pro-life advocates celebrated at the Supreme Court building, the weekend opened with a series of attacks, protests, and arson from pro-abortion radicals. Abortionists attacked state capitol buildings, burned pro-life pregnancy clinics, and even stopped freeway traffic, accosting cars that kept driving with sticks — all on the heels of weeks of attacks on pro-life pregnancy clinics, intimidation campaigns outside justices’ houses, and even an assassination attempt on Justice Brett Kavanaugh’s life.

The decision, though it eliminates Roe‘s concocted “right” to abortion, does not make abortion illegal as the abortionist narrative spins. However, it’s enabled state legislators to outlaw abortion if they see fit. Any laws restricting abortion on the books are now enforceable, and Utah, Alabama, South Dakota, Arkansas, Louisiana, Missouri, Oklahoma, and Kentucky outlawed abortion the day of the decision. Six other states are due to follow with standing abortion bans that have a month to go into effect.

Losing the bulwark of control they’ve had since 1973 is proving a stroke too far for the baby-killing movement, and it didn’t take long for abortionists to make the jump to anarchists. The night of the decision, thousands of abortion supporters attempted to breach the Arizona capitol building, beating the doors and windows. The police deployed tear gas into the crowd and no one breached the building, AZ Central reported. Four were arrested on Saturday but released on Sunday.

While the Department of Homeland Security highlighted concerns over potential targeting of state and federal officials, according to a memo obtained by NBC News, pro-abortion radicals are using a map created by two University of Georgia professors to target pro-life pregnancy clinics. The “Crisis Pregnancy Center Map” gives the very street address of pro-life pregnancy clinics throughout the country, Fox News reported. An anarchist group in Washington state posted a link to the map, encouraging viewers to “find your nearest fake abortion clinic on the Crisis Pregnancy Map.”

In Longmont, Colo., a Christian pregnancy clinic was torched on Saturday morning. Officers arrived on scene around 3:20 a.m. to flames and graffiti messages. “If abortions aren’t safe neither are you,” one message threatened, with an anarchy symbol next to it.

Early Saturday morning in Lynchburg, Va., a pro-life pregnancy center was vandalized and its windows smashed. Four people were visible damaging the building on the security camera.

Virginia Gov. Glenn Younkin condemned the crime in a tweet Saturday evening, saying, “There is no room for this in Virginia, breaking the law is unacceptable. This is not how we find common ground. Virginia State Police stands ready to support local law enforcement as they investigate.”

In Portland, Ore., on Saturday, the night after the ruling, a black-garbed crowd of 100 or more set out on the street at 10 p.m., vandalizing and destroying what lay in their path. A flier announcing the march read, “If abortions aren’t safe then you aren’t either,” OregonLive reported. A pregnancy clinic was vandalized and several businesses had their windows smashed in until the demonstrations subsided around 10:45 p.m.

The night of the decision in downtown Los Angeles, a pro-abortion supporter reportedly threw a flame thrower at a police officer during a protest. The officer, one of four to be injured that night, was treated for burns, and his assailant is being charged with attempted murder.

Also in Los Angeles, a group of pro-abortion demonstrators shut down the highway on Friday, stopping cars and beating those that didn’t stop with sticks. 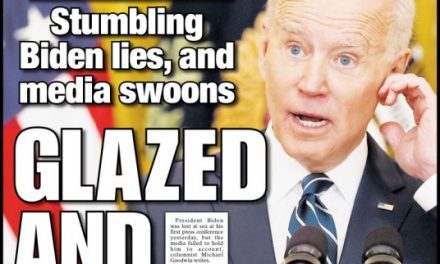