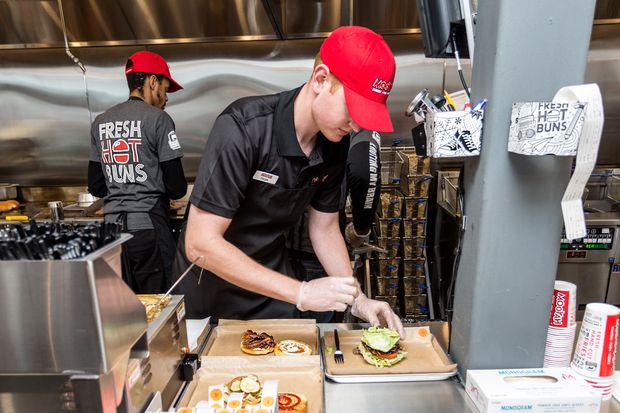 By Eric Morath and Jeffrey Sparshott | The Wall Street Journal
At Mooyah Burgers, Fries & Shakes, the company president says wages increased 8% in 2019. PHOTO: MOOYAH
Short supply of labor, minimum-wage rises and increased poaching have helped lift wages for lower-income workers
Rank-and-file workers are getting bigger raises this year—at least in percentage terms—than bosses.
Wages for the typical worker—nonsupervisory employees who account for 82% of the workforce—are rising at the fastest rate in more than a decade, a sign that the labor market has tightened sufficiently to convey bigger pay increases to lower-paid employees. Gains for those workers have accelerated much of this year, a time when the unemployment rate fell to a half-century low. A short supply of workers, increased poaching and minimum-wage increases have helped those nearer to the bottom of the pay scale.
Pay for the bottom 25% of wage earners rose 4.5% in November from a year earlier, according to the Federal Reserve Bank of Atlanta. Wages for the top 25% of earners rose 2.9%. Similarly, the Atlanta Fed found wages for low-skilled workers have accelerated since early 2018, and last month matched the pace of high-skill workers for the first time since 2010.
“A strong labor market makes the bargaining power of lower-paid workers more like the labor market higher-wage workers experience during good times and bad,” Nick Bunker, economist with job search site Indeed.com, said.
Labor Department data paint a similar picture. Average hourly earnings for production and nonsupervisory workers in the private sector were up 3.7% in November from a year earlier—stronger than the 3.1% advance for all employees—Implying managers and other nonproduction workers saw a 1.6% wage increase in the past year. The department doesn’t produce separate management pay figures.
Nonsupervisory workers earned an average of $23.83 an hour in November according to the Labor Department; managers earned about twice that rate.
Mooyah Burgers, Fries & Shakes, a restaurant chain based in Plano, Texas, with 75 U.S. locations, is among the places that has lifted starting wages to fill positions.
“The effective labor pool is smaller than what it has been in the past,” said Tony Darden, Mooyah’s president. “As you look to bring on folks, ultimately higher wages are used to attract them.”
Mooyah is competing for workers with other restaurants, grocery stores, and service providers such as salons. He said the company increased wages 8% in 2019, with much of that flowing to entry-level workers. As a result managers, such as shift supervisors, are seeing less of a premium over their subordinates, Mr. Darden added.
Low-skilled workers are typically the easiest to replace, and thus struggle to command higher wages at most points in the economic cycle. When workers are in short supply, they can benefit more because there may be dozens of nearby opportunities offering slightly more money.
“There’s been more job hopping and firms are having a hard time finding employees,” said Michael Horrigan, president of the W.E. Upjohn Institute for Employment Research. He was previously associate commissioner with the Bureau of Labor Statistics.
While hourly pay for nonmanagers is growing, average hours worked a week have declined this year. Employers may offer higher wages to attract workers but keep hours in check to control labor costs, Mr. Horrigan said.
The labor market for skilled workers is always tighter, but it hasn’t improved as substantially in recent years. The unemployment rate for high school dropouts fell to 5.3% last month from 7.8% three years earlier. The rate for college grads is down to 2% from 2.4% in November 2016, and is slightly elevated relative to the late 1990s and early 2000s.
Higher-paid workers are more likely to have access to perks, including retirement contributions, vacation leave and subsidized child care—benefits in addition to pay that can keep workers from changing jobs. Many lower-paying jobs at retailers and restaurants don’t offer such perks, and workers may jump between those jobs for a few quarters an hour.
Managerial pay appeared to be held back by smaller production bonuses—such as continuing incentives to reach sales targets or deliver on output goals at a factory—said Bank of America economist Alex Lin. The wage figure excluded most benefits and one-time bonuses and stock options.
“Management pay is more sensitive to microcycles in the economy,” he said. “Other workers are more tied to the labor market, which has remained healthy.”
Another factor supporting the lowest-paid workers is a wave of minimum-wage increases. Twenty-nine states have increased minimum wages above the federal level, and 21 of those will lift the level again in 2020. For example, the minimum wage will increase 12.5% in Washington state, to $13.50 an hour.
“When I heard about that extra $1.50 an hour, I was excited,” said Brian Hoorn of Bellingham, Wash., who earns the minimum wage at Ross Dress for Less. The 28-year-old runs the cash register, aids in fitting rooms and arranges merchandise. He received several pay raises at retail jobs in recent years as the minimum wage rose.
Pay is also increasing for low-skilled work in states such as Georgia, where the minimum wage remains at the federal level of $7.25 an hour.
Eric Watson, owner of an Express Employment Professionals office in Atlanta, said he has advised clients to offer higher wages for warehouse and entry-level manufacturing jobs. The going rate for a warehouse worker in Atlanta is close to $15 an hour, up from $12 two years ago, he said. Some clients raised pay twice in the past year.
“They realize they’re losing their talent to their neighbors,” Mr. Watson said. “Another company will call and offer the worker 50 cents more an hour—and they’ll leave immediately.”
https://www.wsj.com/articles/rank-and-file-workers-get-bigger-raises-11577442600?mod=hp_lead_pos1

One of Korean Air’s cabin crew tests positive for coronavirus