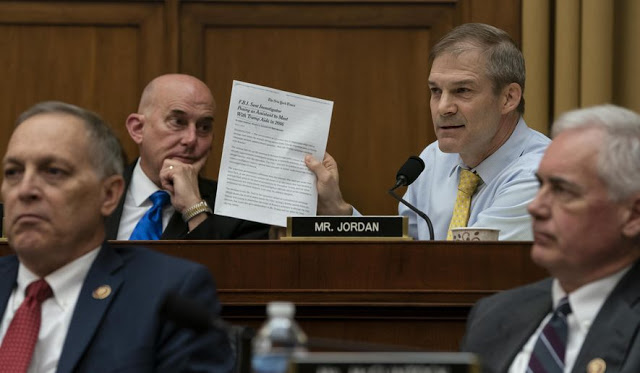 By Joshua Nelson | Fox News
House Speaker Nancy Pelosi’s next step in formalizing the impeachment process is not going to change anything, Rep. Jim Jordan, R-Ohio, said Tuesday.
“I think the speaker is going to try to dress it up a little bit, put a little lipstick on the pig as they say and have this vote on Thursday, but it’s not going to change anything,” the ranking Republican on the House Oversight Committee told “Fox & Friends.”
Pelosi said Monday the House will vote this week on a resolution to formalize — and establish the parameters — of the Trump impeachment inquiry.
MORE QUESTIONS EMERGE ABOUT HUNTER BIDEN’S BUSINESS DEALINGS, EVEN AS TRUMP IMPEACHMENT INQUIRY INTENSIFIES
In a letter sent to Democratic House lawmakers, Pelosi, D-Calif., said the resolution “affirms the ongoing, existing investigation” and “establishes the procedure” for future investigative steps.
“We are taking this step to eliminate any doubt as to whether the Trump administration may withhold documents, prevent witness testimony, disregard duly authorized subpoenas, or continue obstructing the House of Representatives,” Pelosi said.
Fox News has learned the vote will take place Thursday on the House floor. It is not an actual article of impeachment, but rather a resolution that sets process ground rules.
Jordan went on to say, “Even if they try to change something to give a little bit of due process, we’re all still going to vote against this because this is such a sham and it’s been such a sham from the beginning.”
Jordan also said that every Republican is going to vote against it.
Fox News’ Alex Pappas contributed to this report.
https://www.foxnews.com/media/jim-jordan-house-impeachment-vote-fox-friends