After all, slavery was abolished generations ago. Those directly involved in slavery died generations ago. Civil rights protections are the law of the land – widely respected and dutifully enforced. But there’s a segment of the left that suggests reparations are the only way to close the book on the issue. In Emery’s opinion, it only seems to dredge up animosity.

In a point-counterpoint for InsideSources, Emery wrote:

Reparations should not be a topic of discussion in today’s America. Progress and success should be our focus as we strive to achieve the American Dream. We should focus on keeping America great, not looking for another huge socialist payout.

But while Emery suggested Americans should “flip the script from reparations to personal responsibility” as the “cure for inequality,” the counterpoint offered by Dedrick Asante-Muhammad of the National Community Investment Coalition and Chuck Collins of the Institute for Policy Studies was a strident complaint about the alleged problem of “white wealth” and “the violent displacement of indigenous people.”

Muhammad and Collins claimed that “all white people in this country benefit from a social and economic infrastructure that was built on black exploitation.” Their solution is a “Reparations Trust Fund” to collect taxes from “wealth” such as earnings and savings, inheritance and penalties on the assets of individuals and businesses that are banked abroad or in trusts.

While Muhammad and Collins wrote that “[t]here’s no myth of hard work or deservedness that can justify” what they consider financial inequity, Emery pointed out that generations of self-appointed black leaders – the current slate of which embraces reparations rhetoric – has failed in promoting the value of self-improvement and a work ethic.

Noting that the recent Emancipation-related observance of Juneteenth was cynically used for a congressional hearing on reparations, Emery wrote:

It is ironic that blacks are still calling for reparations in 2019, and using Juneteenth to do it. We have had many opportunities to put ourselves on equal footing with other Americans and pursue the American Dream. But too many of us have failed to do so…

Over the years, black leaders failed to bring their communities to prosperity by promoting and teaching sound principles for economic growth. They also failed to help people use the resources that are available to every American regardless of their ethnic background.

To read Emery’s InsideSources commentary – “Reparations are Treated as the Cure for Inequality – They are Not” – in its entirety, click here. A link to the Muhammad-Collins piece is provided on that page. 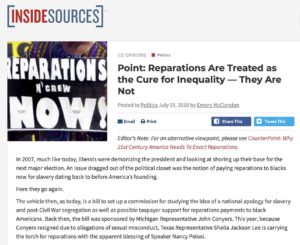 The post Reparations Ignores American Greatness for a “Socialist Payout” appeared first on The National Center.

Texas Ranger Sgt. David Armstrong said no probable cause to arrest Amber Guyger for any crime.