Did Amazon founder and CEO Jeff Bezos lie to Congress?

During a recent hearing on Capitol Hill,  Bezos was challenged by Representative Matt Gaetz about the internet retail giant’s decision to outsource the gatekeeping regarding who can participate in its AmazonSmile charitable program to the controversial Southern Poverty Law Center (SPLC). Representative Gaetz asked: “Why would you trust them?”

Acknowledging an “imperfect system,” Bezos replied: “I would love suggestions on… better or additional sources.”

But he has already received a suggestion! In a Federalist commentary, Justin Danhof, Esq. – director of the National Center’s Free Enterprise Project (FEP) – remarks:

He would love suggestions? Bezos has received such a suggestion tens of thousands of times this year. I should know. I am responsible for personally sending one to him.

In fact, Justin sent the company a proposal on the subject that Bezos – as chairman of the Amazon board of directors – undoubtedly voted to oppose.

Bezos should have been testifying as to why he opposed the commonsense plan offered by FEP regarding the company’s outright religious discrimination, a plan backed by many Amazon investors and customers.

Gaetz called out Bezos over the company’s reliance on the Southern Poverty Law Center, or SPLC, as the gatekeeper for the AmazonSmile charitable program. Through AmazonSmile, customers can direct a small percentage of their purchases to a charity of their choice. That choice, however, is limited to charities the SPLC filters.

Gaetz rightfully called out this unholy marriage. Looking right at the richest man in the world, the Florida congressman said: “I am not here accusing you as someone who would ever traffic in hate, but it seems you have empowered people who do. I’m particularly talking about the Southern Poverty Law Center.”

“Why should it outsource this awesome responsibility to any outside organization,” Justin asks, “much less to a discredited anti-religious one?”

As the overseer of the AmazonSmile program, the SPLC has used its “hate map” and other politicized resources to “demonize” Americans of faith:

By placing faith-based groups such as the American Family Association, the Family Research Council, the Jewish Defense League, and Alliance Defending Freedom alongside anti-Semites and racists such as the Ku Klux Klan, the hate map smears Americans of faith with guilt by association. It’s sinister, and Bezos knows it. Yet he still allows the SPLC to block these faith-based charities and others from AmazonSmile.

At this year’s Amazon shareholder meeting in May, FEP presented the resolution that “highlighted the inherent risks of engaging in such outright bigotry and viewpoint discrimination.”

“Any sober assessment of our resolution,” Justin writes, “would have caused Amazon to drop the SPLC.”

Not only that, but a companion petition campaign in support of the resolution generated tens of thousands of petitions that were sent to the members of the Amazon board of directors – including Bezos.

So no matter what Bezos testified – under oath – before Congress, the CEO has already received advice worth serious consideration:

If Amazon employees can decide which products are permitted to be sold on its massive website, surely they can be tasked with determining which charities are peddling in hate versus those simply preaching religious values. Bezos knows this, and despite his claim that he “would love suggestions,” he knows he’s already gotten them. 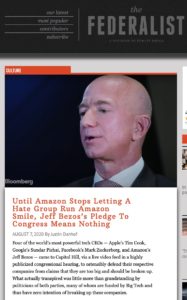 The post Bezos Admitted a Problem, But FEP Already Gave Him the Solution appeared first on The National Center.

And the faith of creationist Democrat William Jennings Bryan

Appeasement Never Works! Part III
you can’t negotiate with the
ENEMY!
All you’ll get is empty promises
filled with
Platitudes and Phoney Euphemisms
Op-Ed by Pastor James Wesley Jr Sunday 19, July 2020 @0546
The violence we see sweep our nation is truly troubling. We see chaos and violence of every sort as as our cities are ablaze. This exploded when police officers arrested a black man George Floyd
for bouncing a check. They had him restrained his  hands were cuffed behind his back ,and the policeman had the suspect on the ground with his knee on his neck. The suspect was crying “I can’t breathe”… yet the arresting officer persisted… and the black man died as a result. This immediately resulted in peaceful demonstrations turning violent nationwide. There has been violent attacks on police, fire bombing of businesses and looting, with ongoing shootings in cities like Chicago where the death toll is increasing daily.
This violence is being led primarily by two     organizations “Black Lives Matter and Antifa”. The BLM’S excuses for their response is “righteous indignation”…This by no means justified the chaos,and violence exploding in commercial districts, and affecting black businesses is an obvious contradiction to their stated

Project 21 Co-Chairman Council Nedd II has the unique distinction of being both a bishop and a constable.

As he explained in an interview with the One America News network, he has been busy tending to his congregation to keep the faith in addition to patrolling the streets to keep the peace.

As such, he has keen insights on the recent unrest, how people are dealing with it and the potential carnage that would result from defunding police departments.

“As a clergyman, I don’t like a lot of the stuff I see,” he told OAN correspondent Stefan Kleinhenz. “All civility seems to be lost.”

And the problems of the COVID-19 pandemic have made things worse:

Usually in times of crisis, people turn to God.

But most of the churches across the country were shut down during the pandemic and we’re just slowly now starting to reopen.

So people don’t have the institution of church to fall back on like they normally would.

The tinderbox of the lockdown, set off by the horrible death of George Floyd while in police custody, led to nationwide rioting and calls to defund police departments. The latter movement seems to be gaining traction in liberal-led cities. This, Council said, could have deadly repercussions:

If police get defunded, literally the very next morning what we will see across this country in just about every urban city would be streets littered with dead bodies, with corpses and seriously injured people seeking help.

Noting that these demands appear to be championed by those who won’t have to suffer the results, he added:

Remarking that an analysis of the situation is “very simple to me,” Council explained that hobbling law enforcement officers is not something mainstream America wants to do:

WHAT HAPPENS WHEN BLACKS FORGIVE WHITES

I am no stranger to racism or forgiveness. While in the Navy, a racist shipmate tried to kill me by dropping 2,800 pounds of steel and other metals on me, intending to end my life. It left me permanently disabled with a lifetime of pain. In the midst of anger and...
Read More

LTP News Sharing: Bishop Samson Shukardin said minorities are 'considered infidels and they are depicted negatively' in school textbooks Religious bigotry in Pakistan schools is forcing Christian parents to give their children Islamic names – according to a...
Read More

9-11 was not about Muslims, terroism or Islam. What was it about?

LTP News Sharing: Think!!! CORONA VIRUS...FECES IN THE STREETS, NEEDLES, RATS...ETC.. NOW PICTURE DRY GRASS AND GASOLINE ON A HOT DAY,,,hmm??? get the picture??? The whole state OF CALIFORNIA is a biological TIME BOMB AND A NATIONAL HAZARD,,,The whole state of...
Read More

SPIRITUAL: Every Knee Shall Bow

Spiritual Live Events are here to increase your spiritual growth. Programs will exciting, you don’t want to miss out!

What’s wrong with being a racist

Come out from among them! Why I don't hang with most liberals.

We are called to be A HOLY NATION

Take your Bibles to Vote

9-11 was not about Muslims, terroism or Islam. What was it about?

Why are Liberals exposing their true “Socialist” agender?

Mason Weaver on the death of John McCain

Supreme Court or Supreme being

4th of July 2018. The American Revolution is never over.

Why Trump is winning against the FBI, DOJ and the open borders crowd.

Man is not man enough to destroy the planet.

Success is determined by action

The only power is forgiveness

No Battle of Armageddon!

God recognizes Jerusalem and so should we!

Depend on God not liberals

Something is strange about these school shootings

Why do liberals deflect the truth?

Mason Weaver. Are you sheep?

Jesus was born “It is finished!”

Women have the Power if the Accusation.