“Thank you dear Republican Party for the 360,000 men sent to die fighting against your own brothers to free total strangers.”

“We owe so much to those who came before us. It is for their struggles and sacrifices we celebrate their victory. From the tears and misery they endured, we gain our strength. In honor of all who struggled and died, in memory of all who resisted and suffered, for those who lived a life not worth living to preserve life for us… we give thanks to strangers whom stood with us and for us. The Republican Party.”

“Thanks to the Republican Party”

It was the Republicans who organized the Safe Houses and set forth the Emancipation Proclamation. It was also the Republican led army who marched into Galveston, Texas in 1865 to free the slaves on that first Juneteenth.

Thank you dear Republican Party for the 360,000 men sent to die fighting against their own brothers to free total strangers.

Thank you dear Republican Party for the 13th Amendment banning slavery in the District of Columbia.

Thank you dear Republican Party for the Civil Rights Act of 1866, conferring rights of citizenship on Black Americans.

Join us in this call for all Americans to officially:

Democrats should apologized for the following:

Government control over corporate profits.
Progressive taxes on the upper middle class and above.
Legalization of recreational marijuana.

Complete takeover of health care by federal government plus inclusion of all illegal immigrants.

Taxpayer abortion on demand until birth, with full funding of Planned Parenthood.

Liberalized voting standards to include fraudulent practices and everyone the Party deems as “disenfranchised”.

Liberal, not originalist, judges on the Supreme Court and federal courts.

Implementation of comprehensive LGBTQ agenda—including indoctrination of children in schools, transgender initiatives, gender reassignment surgery and removal of any “sexual discrimination” in the workplace and schools, disregarding conscience objections.

Alignment with United Nations and European Union transnationalism initiatives promoting “One World” globalism rather than nationalism with international cooperation.

Open immigration policy with full acceptance of all children and relatives; no border “walls”, entrance requirements, e-verify or penalties for those refusing deportation; disregarding the rule of law and full support for “sanctuary cities”; neglecting national security and allowing George Soros-funded anarchy to “crash” our immigration system.

Alignment and support for radical feminist agenda and marches.

Reestablishing of Iranian “nuclear deal” alongside increased protection for Islamic “rights” in America and abroad at the expense of Israel’s safety.

Elimination of the Electoral College.

“Be sober and watchful, because your adversary the devil walks around as a roaring lion, seeking whom he may devour” (1 Pet. 5:8).

I lived in the D.C. area for 24 years, worked directly across from the White House and taught the Bible weekly to 2000 young people 10 minutes away.

Positioned in the heart of the capital, we prayed for the government each meeting (1 Tim. 2:1-4), convinced of our call to “… stand against the schemes of the devil. For our fight is not against flesh and blood, but against principalities, against powers, against the rulers of the darkness of this world, and against spiritual forces of evil in the heavenly places” (Eph. 6:11b-12).

On our watch, we witnessed the exposure and removal of a president and vice president for the first time in U.S. history.

The time has come to acknowledge spiritual realities: the devil is using the Democratic Party to try to destroy America. If we don’t awaken, our children will soon awaken in a nation unrecognizable to us today.

Actor Christian Bale, a Democrat activist and stepson of feminist Gloria Steinem, recently gave thanks to Satan for helping him win his Golden Globe award for his role in Vice, destroying the reputation of former Vice President Dick Cheney.

His diabolical advice: “… the safest road to hell is the gradual one-the gentle slope, soft underfoot, without sudden turnings, without milestones, without signposts …”

While there is no perfect party or politician, God-fearing Americans are asking if the time has come to say “sayonara” to the Democratic Party as it morphs into a European secularist and socialistic entity.

It has become increasingly leftist and anti-capitalist in its pursuit of “social justice” and “income equality.” It’s not the fringe or a few factions who believe they must aggressively remove “outdated” policies and “unenlightened” politicians hindering those they deem as the “disadvantaged.”

They believe man is not sinful but basically good, and by wealth distribution, freedom from repressive religion and by “progressive” education, we’ll enjoy utopia. They dismiss the wisdom of Nobel laureate Frederick Hayek, author of The Fatal Conceit, “The curious task of economics is to demonstrate to man how little they really know about what they imagine they can design.”

Recall the sincere but misguided socialist experiment of Governor William Bradford with the Pilgrims in pooling their harvest together but discovering there were slackers trying to live off the labors of others. He quickly exposed their laziness and apportioned each a plot of land to work and reap the fruit of his individual labor. This rescued them and incentivized them, resulting in productivity and success. (Larry Tomczak)

My parents were Democrats, and I grew up as a boy having a positive view of Presidents Truman and Kennedy. I was shocked and saddened when I later discovered the history of the Democratic Party as the party of slavery, secession and segregation. As I’ve watched the ascent of extremism, socialism and godless secularism in its ranks, I’m alarmed with millions of patriotic Americans at the trajectory of its politicians, policies and platform—attractive on the surface but dangerous in their outworking.

House Speaker Pelosi stated in USA Today (Jan. 3, 2019) the top two “generational challenges of our time are reducing income disparity and combating the climate crises.” While we should all strive to be good stewards of the environment, we must be discerning not to succumb to hysteria based not on scientific empirical evidence but from Al Gore’s theories and disproven myths catapulting him to multimillionaire status.

The Democratic Party’s socialistic economic initiatives are taking root, especially among Millennials. They’re woefully uneducated on its tenets and the devastation it has brought hundreds of millions in history. They’re seduced by lofty yet unrealistic promises and lured by charismatic politicians often going unchallenged by the sympathetic anti-Trump media.

A current example is their “Green New Deal”:

New York Congresswoman Alexandria Ocasio-Cortez is the party’s new star, who’s a symbol and proponent of Democratic socialism. She told 60 Minutes she was a “radical”; “advocated free health care for everyone”; and proposed a “top tax rate of 70 percent like the U.K. [it’s actually 45 percent], Finland or Sweden” (minuscule and easily manageable populations of 5 and 10 million compared to our 350 million).

Our already $22 trillion debt would quickly explode from this delusional scheme, devastating millions, collapse our economy and result in rioting like in Venezuela.

Do you know that in his Communist Manifesto, Karl Marx said the “progressive income tax” imposed by the governing elite was a “despotic inroad on the rights of property” requiring the Communist revolution?

Are you ready for the government to confiscate your savings and property upon death instead of you bequeathing them to your family?

Presidential hopefuls Elizabeth Warren and Bernie Sanders are both avowed socialists. California Senator Kamala Harris is announcing her candidacy, having gained notoriety for arrogant behavior at the Kavanaugh hearing, along with forcefully assaulting a judicial nominee simply because he’s a member of the 2-million strong,136-year-old Catholic “Knights of Columbus.”

Without a desperately needed spiritual awakening, America is on a dangerous slope. Millions must recognize how the enemy is using the Democratic Party with its seductive, totally unrealistic, godless vision for America. It is totally foreign to that of our Founding Fathers and 242-year heritage.

The brutal reality is that the Democratic Party is not the one of even a generation ago. It has become radicalized; hostile to biblical values and religious freedoms; disrespectful to individuals and institutions; unashamed in using profanities and employing intimidation in the media and public square; increasingly irrational, lawless, dishonest, hypocritical, corrupt, and mean-spirited (remember the Brett Kavanaugh hearing?); and finally, flippant in dismissing “due process” and our two foundational societal pillars of the sanctity of human life alongside the sanctity of marriage between one man and one woman.

Here’s the deal: As we’ve watched the difficult-to-believe destruction of the 108-year-old Boy Scouts of America because the organization capitulated to forces the Democratic Party championed, let us consecrate ourselves at this defining time to intercession, gospel proclamation, “salt and light” activism and courageous, uncompromising obedience to God.

Extraordinary circumstances require extraordinary measures. “Therefore, ‘Come out from among them and be separate,’ says the Lord. ‘Do not touch what is unclean, and I will receive you. I will be a Father to you, and you shall be My sons and daughters, says the Lord Almighty'” (2 Cor. 6:17-18).

The devil is a defeated foe and no matter how destructive his influence is at this critical time, remember, “The earth belongs to the Lord, and its fullness, the world, and those who dwell in it” (Ps. 24:1).

May God bless the United States of America as we pray and communicate that we must return to Him and His ways, upon which our nation was founded and as a result, is the most blessed and prosperous nation on earth.

Portions of this section is from an article written by Tim Young; Image added from varies sources.

With all this racism talk going around… I think it’s important that we reflect on some of the most horribly racist quotes that Democrats have dropped… and that the media has forgotten about… in the past couple of years.

In a time when we still hear about Dan Quayle misspelling the word potato, you would think that these quotes would’ve been even more memorable… From Hillary to Joe to Bill and Barack… they’ve all had fantastically horrible things to say about other races… but the media conveniently forgets about these quips… 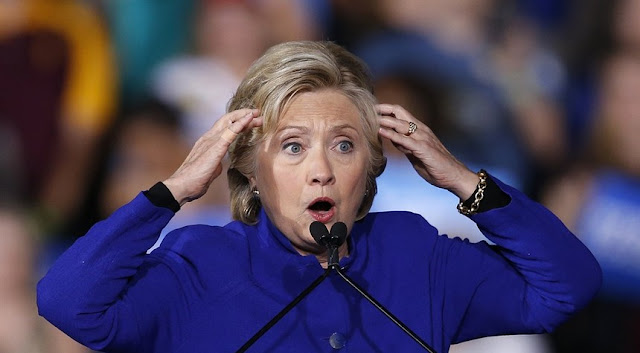 Hillary Clinton when she was a Senator:

“I love this quote. It’s from Mahatma Gandhi. He ran a gas station down in St. Louis for a couple of years. Mr. Gandhi, do you still go to the gas station? A lot of wisdom comes out of that gas station” 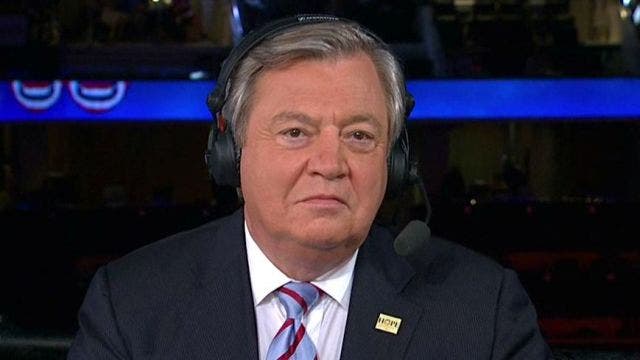 “In about 18 months from now, hopefully [Gubernatorial candidate Sen. Vincent Sheheen] will have sent Nikki Haley back to wherever the hell she came from and this country can move forward.”

A great quote about Obama:

“A few years ago, this guy would have been getting us coffee,” 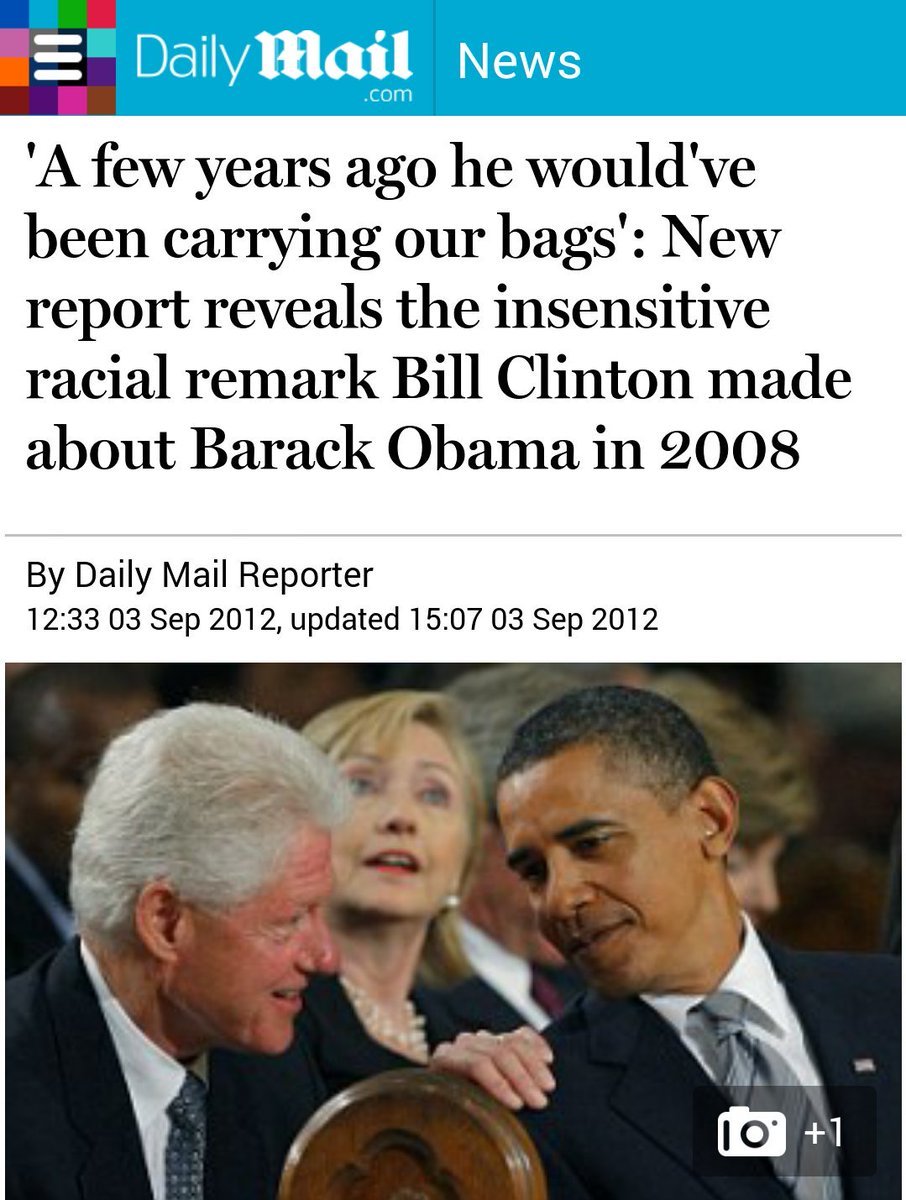 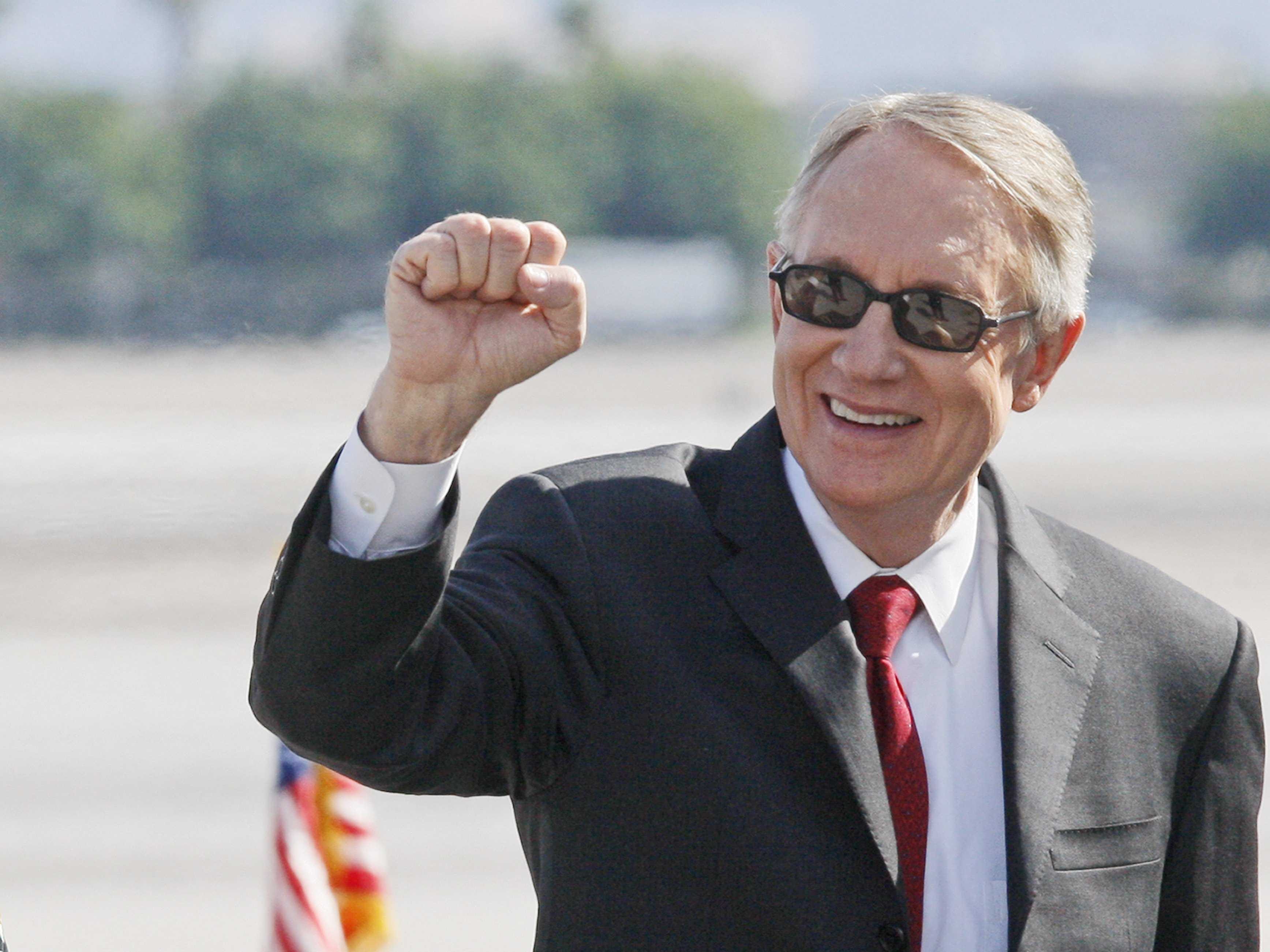 In a 2010 interview with journalists Mark Halperin and John Heilemann in which he said that Barack Obama would be successful in his Presidential thanks to being “light-skinned” and speaking “with no Negro dialect, unless he wanted to have one.” 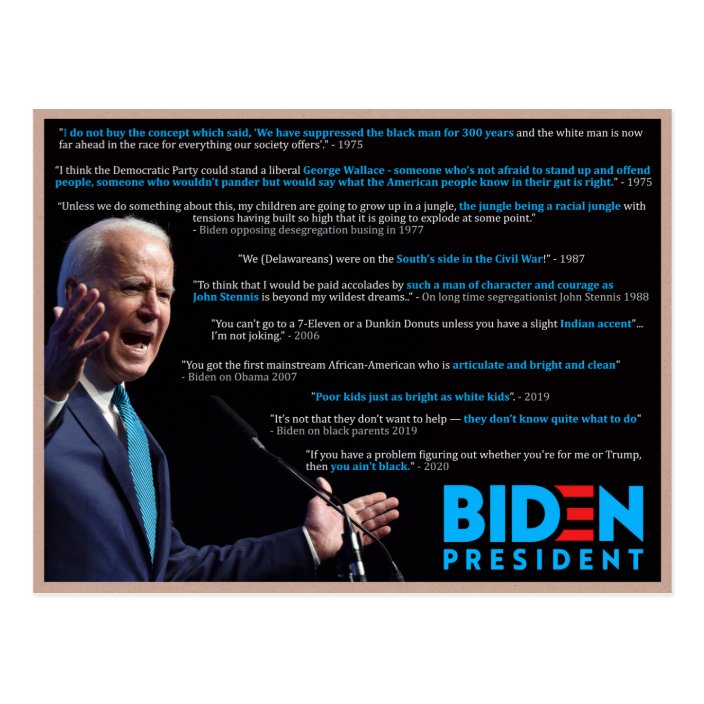 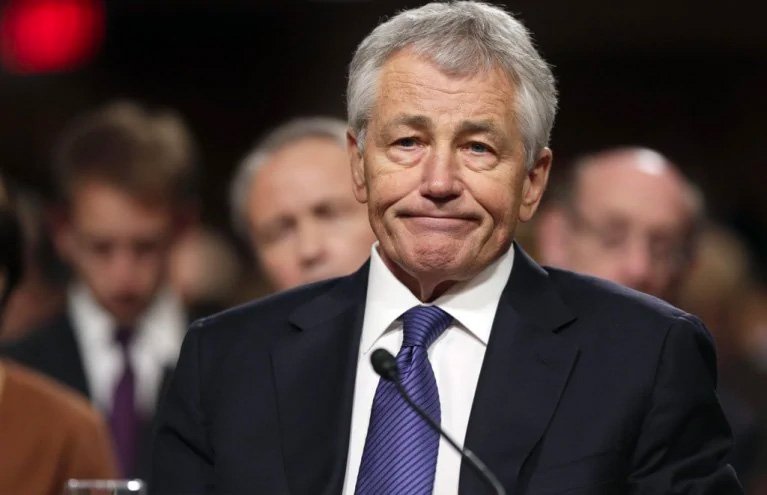 Taking a question from Robin Gandhi, an assistant professor at the University of Nebraska and a man of Indian descent:

“You’re not a member of the Taliban, are you?”

“I mean you’ve got the first sort of mainstream African-American who is articulate and bright and clean and nice-looking guy.” 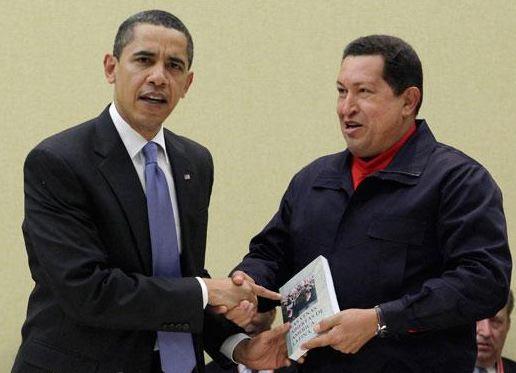 That time President Obama caught his grandmother being a “typical white person,” whatever that means…

“The point I was making was not that Grandmother harbors any racial animosity. She doesn’t. But she is a typical white person, who, if she sees somebody on the street that she doesn’t know, you know, there’s a reaction that’s been bred in our experiences that don’t go away and that sometimes come out in the wrong way, and that’s just the nature of race in our society.” 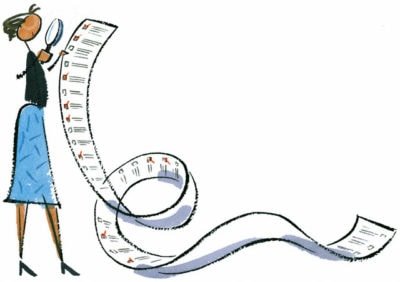 Democrat Party should apologize to Black Americans for this list of atrocities: