The Biden-Sanders Debate and the DNC: “Their islands are sinking” 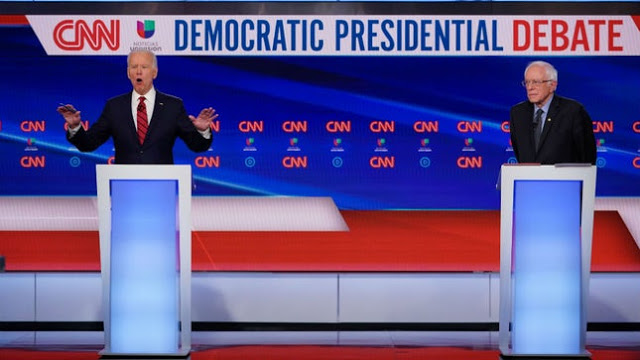 By Scott Johnson | POWERLINE
CNN hosted the Biden/Sanders debate last night for two painful hours. Bernie Sanders played the role assigned by DNC Central Command almost to perfection. His assigned role, rumors to the contrary notwithstanding, is to assist Biden by making him look sane by contrast with Sanders. Biden is unable to take full advantage of the assistance by his adherence to the current orthodoxies of the Democratic Party and his desire to mollify the Sanders crowd.

Biden forgot on a few occasions that he wasn’t supposed to take Sanders at face value. As I say, the man was there to lend a hand.

Biden’s climate change worry list reflects a crossover to the Hank Johnson dysphoria. Biden explained, for example: “The single greatest threat is climate change to our national security. As populations have to move because they can no longer live where they are because their islands are sinking, because you saw what happened in Darfur with the change of weather patterns. It causes war. It causes great migrations.”

Now that is some weird stuff, except perhaps in the upper reaches of the Democratic Party and its media adjunct. Unfortunately, there is no one left in the Democratic Party to assure Biden everything will be okay or advise him that the conflict in Darfur doesn’t have a damn thing to do with the weather. This is nevertheless a hobby horse Biden has been riding for a while.

Biden made three notable pledges last night: (1) he will pick a woman as his running mate and name a black woman to the Supreme Court; (2) he will ban new fracking and he’s not too crazy about oil drilling either; (3) he’s all in for the Green New Deal; and (4) he will prohibit deportations of illegal aliens during his first 100 days in office.

On (1): I am afraid Amy Klobuchar has the edge. Couched in terms of picking a woman rather than the best person for the job, the commitment is a function of the Democrats’ identity politics. It comports with Biden’s pledge to name a black woman to the Supreme Court. Biden’s pledge devalues the merits of both nominees in advance.

These people are nuts (video below) and there is no cure in sight.

‘A Collection of Permanent Bureaucrats Enmeshed Inside the Federal Government’