Since when has it been in the best interests of Nike to promote the death of potential customers?

As odd as this may sound, it is exactly what is happening right now in corporate America. Big business is being asked to support the abortion industry, and companies are falling into line. They are funding the pro-abortion lobby, and putting their reputations on the line in the process.

“Why do so many American companies support the extermination of millions of potential future customers?” asks Justin Danhof, Esq., the National Center’s general counsel and director of its Free Enterprise Project (FEP). “It’s a question that the media really needs to start asking corporate executives.”

In a commentary published on the Breitbart website, Justin writes about the extent to which the business world is now backing abortion, including:

Justin points out that CEOs signing onto the Times ad are from companies such as Twitter, Yelp and Starbucks that “don’t perform abortions” and “aren’t profiting from the anti-life business.”

And then there’s Nike, which could do damage to its reputation among living customers as a result of its pro-abortion extremism:

Nike’s funding of Planned Parenthood is even more perplexing considering that it makes enormous revenue from the African American community. After all, Planned Parenthood was founded by a racist white woman, Margaret Sanger, and racial disparities in abortion abound.

“You would think with all this support for abortion and opposition to pro-life legislation, that the abortion machine would be satisfied with its standing in corporate America,” Justin says. “You’d be wrong.”

He explains that radical investors are already putting pressure on a select group of companies “to discuss their positions related to sexual and reproductive health care, including contraception and abortion,” according to CQ Roll Call.  And there are five shareholder resolutions being pushed this year to compel companies to “report on the effects of pro-life legislation on the workforce.”

The message is clear: Get into the abortion debate, get on our side, or we are coming after you.

This is why FEP’s stand up for life is so important. As the largest and most active conservative shareholder advocate, FEP has addressed abortion issues with companies such as Bank of America and Intuit. While FEP is resilient, it needs more help against a monied and well-staffed opposition. It urges everyone who stands for life – from faith-based institutions to pro-life groups to principled stockholders – to make their voices heard.

“Companies can – and indeed should – remain neutral in the culture wars,” Justin writes. “But they need to hear from both sides in order to have the political courage to do so.” 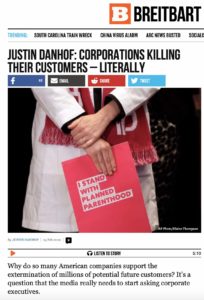 The post The Corporate War on Future Customers appeared first on The National Center.

Gene transcripts from ancient wolf analyzed after 14,000 years in permafrost