Being the far-left progressive loon that he is, Beto O’Rourke decided to push the envelope a little further left. During the last debate he stated, “Hell yes we’re going to take your AR-15; your AK-47.”

He is even selling a T-shirt with that exact quote on it.

Yes, he wants to steal private property from We The People. Why not? They already favor stealing our labor in the form of much higher taxes. Their ‘free stuff’ has to be paid for, after all.

Of course my cartoon shows a shotgun, but once the grabbers start grabbing, they won’t stop at certain models. The tyrants want ALL the guns grabbed. To them only Big Government should have guns.

Cory Booker wants ‘gun licensing.’ Hey Cory, we citizens already HAVE a license. It’s called the Second Amendment. Booker might complain about how the police are racist and want to shoot brown people, yet he wants all the brown people’s guns in the hands of the police. Logic doesn’t apply to the gun grabbers. Nor does the Second Amendment. They, and their globalist Deep State masters have already destroyed our Fourth Amendment. Why not bring ‘em all down? If they can dislodge the pillar that is the Second, then all the other pillars will come down. Without our guns, we’ll become defenseless slaves to the tyrannical government Jefferson warned us about.

Red flag laws are also reprehensible. The government can easily declare Constitution-believing patriots are mentally ill and take our guns that way. Someone who might get depressed on occasion is not a valid reason to strip him of his right to own a firearm.

We must resist any kind of gun control—whether it be outright seizures or subtle and reasonable-sounding ‘common sense’ gun control. The government already controls us enough—far too much, in fact. No more handing over our liberty in exchange for their ‘safety.’

‘Shall not be infringed!’

Shall NOT Be Infringed Shirt Order yours now- click here 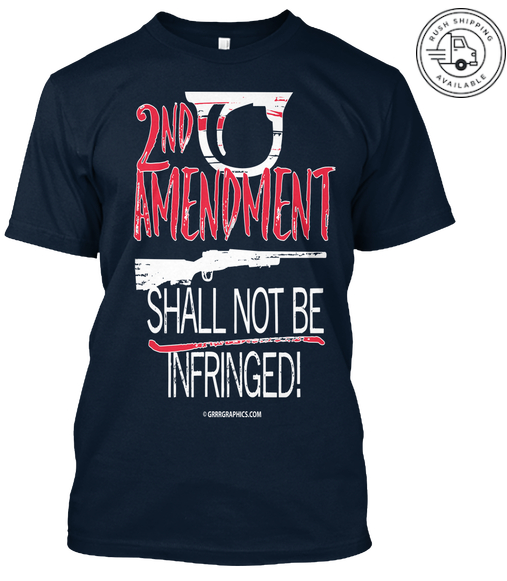