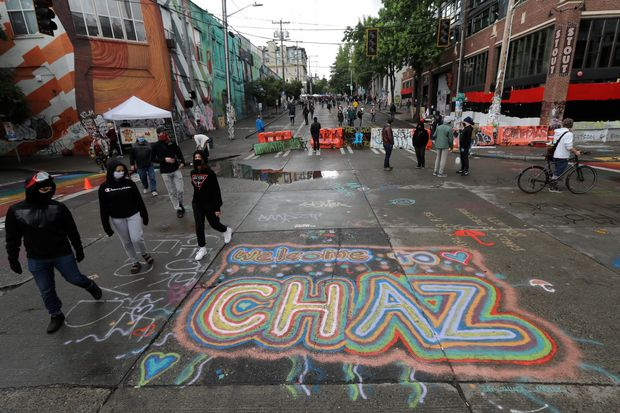 By The Editorial Board | The Wall Street Journal
After police fall back, protesters declare a new ‘autonomous zone.’
People walk past street art that reads “Welcome to CHAZ” inside what is being called the “Capitol Hill Autonomous Zone” in Seattle, June 11. Photo: Ted S. Warren/Associated Press
The founding of any new nation is worthy of note, and so it is with the Capitol Hill Autonomous Zone, several blocks of Seattle that have been seized by protesters, Occupy Wall Street types and assorted opportunists. Now it’s up to the citizens of the CHAZ, adapting Federalist No. 1, to decide the important question: whether anarchies of men are capable or not of establishing good government.
This week the Seattle police withdrew from their East Precinct in the Capitol Hill neighborhood, after threats that it would be torched. The cops removed barricades and began “decreasing our footprint,” Chief Carmen Best said, as the protesters had requested. Ms. Best called it “an exercise in trust and de-escalation.” But human nature abhors a vacuum, and CHAZ revolutionaries soon declared their autonomy.
As a cardboard sign at the border of the CHAZ warns: “You are now leaving the USA.” Seattle residents report “that they have been subjected to barricades set up by the protesters,” Assistant Chief Deanna Nollette said on Wednesday, “with some armed individuals running them as checkpoints into the neighborhood.” Open carry is legal in Washington state.
CHAZites have also set up medic stations and a “No Cop Co-Op” to distribute snacks. There were rumors of a rudimentary system of taxation, “reports of citizens and businesses being asked to pay a fee to operate within this area,” Ms. Nollette said, although this is in dispute and hasn’t been substantiated.
She added that police were interested in a dialogue with the Foreign Ministers of the CHAZ, if any could be contacted. “There is a whole city-wide effort at this point,” Ms. Nollette said, “to try to identify who the leaders are.”
At a gathering of CHAZites Wednesday, there was talk of perhaps forming governance. “In a leaderless movement there has to be people stepping up to be leaders,” argued a protester identified as Rell, per the Seattle Times. That night, a crowd enjoyed a funk-rap concert by the band Marshall Law.
By Thursday the CHAZ had established that universal symbol of statehood: a website. It explains itself as “an emerging community based on mutual aid,” yet one with an ugly history: “Although we have liberated Free Capitol Hill in the name of the people of Seattle, we must not forget that we stand on land already once stolen from the Duwamish People.”
There’s a list of demands, which run from free college, to “the de-gentrification of Seattle,” to amnesty for crimes committed “against the terrorist cell that previously occupied this area known as the Seattle Police Department.” But the future of this new micronation is yet to be written. As one founding father told the Seattle Times: “I support this, but what’s next?”
President Trump denounced all this in tweets, but for once he should let it speak for itself. The good progressives of Washington allowed the CHAZ to rise, and now they can decide whether to invade the enclave or let it become a new republic, if they can keep it. The city of Seattle says it has “arranged for garbage cans and portable toilets to be placed in the vicinity for use by demonstrators.” Let’s see how progressive this paradise looks in a month.
https://www.wsj.com/articles/the-seattle-secessionists-11591919047?mod=opinion_lead_pos3

Harvey Weinstein and the Lawless Hypocrites and Tragic Victims