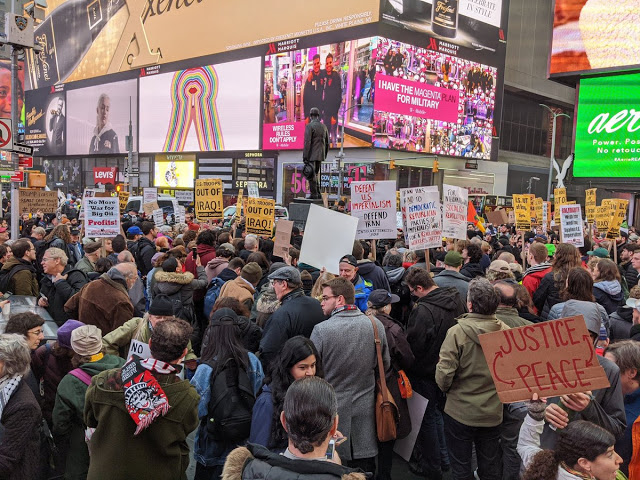 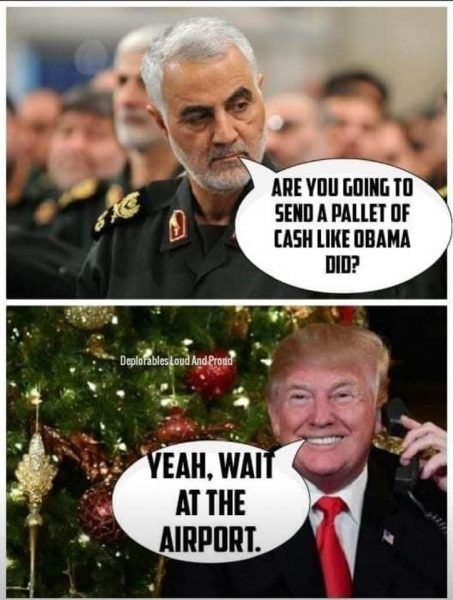 A group of activists gathered at Fountain Square around noon on Saturday as part of a nationwide protest to rally against a new war in the Middle East.
Over 70 cities across the country are said to be a part of the protest, spearheaded by the Answer Coalition. According to their website, the day of action scheduled for Jan. 4 was in direct response to the killing of Iranian military leader general Qasem Soleimani.
So massacres by ISIS, or Iranian-backed militias attacking an American embassy aren’t “violence in the Middle East,” but the U.S. killing an avowed enemy is. No surprise given that A.N.S.W.E.R. is, as lefty David Corn reported, a communist front group.
This was no accident, for the demonstration was essentially organized by the Workers World Party, a small political sect that years ago split from the Socialist Workers Party to support the Soviet invasion of Hungary in 1956.
The party advocates socialist revolution and abolishing private property. It is a fan of Fidel Castro‘s regime in Cuba, and it hails North Korean dictator Kim Jong-Il for preserving his country’s ”socialist system,“ which, according to the party‘s newspaper, has kept North Korea ”from falling under the sway of the transnational banks and corporations that dictate to most of the world.“ The WWP has campaigned against the war-crimes trial of former Yugoslav President Slobodan Milosevic. A recent Workers World editorial declared, ”Iraq has done absolutely nothing wrong.“
Officially, the organizer of the Washington demonstration was International ANSWER (Act Now to Stop War & End Racism). But ANSWER is run by WWP activists, to such an extent that it seems fair to dub it a WWP front.
Remember, they’re not “anti-war,” or “anti-violence.” They’re just on the other side. The Cincinnati Enquirer’s Madeline Mitchell should have told us a little more about the organizers of this event — I doubt she would obscure the background of the Ku Klux Klan if it sponsored a rally.
________________
DISPATCHES FROM THE MEMORY HOLE: Iran proved vital to al Qaeda’s safe passage, according to bin Laden records, 9/11 commission.
By Ed Driscoll | Instapundit
WISE THOUGHTS FROM A FRIEND ON FACEBOOK, WHO WOULD RATHER NOT BE NAMED HERE:
Following the death of Soleimani, it seems like nearly the entire DC / academia / journo natsec/forpol commentariat has penned variations on exactly the same essay: the President has acted hastily, has no plan, and isn’t capable of envisioning or handling what happens next. The template was established by Ben Rhodes on Twitter a few hours after an MQ-9 Reaper shot a Hellfire missile directly into his professional legacy, and it hasn’t varied much since.
Yet the more we learn — about the deliberations preceding the strike, about the chain of events leading to it, about the prior and subsequent moves by CENTCOM to harden the American position in the region — the more it seems that the President acted with deliberate aforethought, that he does in fact have a plan, and therefore likely is capable of envisioning and handling what happens next. That much is only fair, whether or not one agrees with the decision as such.
What nearly the entire DC / academia / journo natsec/forpol commentariat actually means by its critique, though, is that they weren’t included in any of this. Ben Rhodes took the time to rally them together, get their talking points aligned, illuminate a pathway to social and professional advancement: that’s their preferred template for Iran-related policymaking.
Donald Trump’s template for Iran-related policymaking is the smoking wreckage of a terror mastermind’s vehicle. The courtiers see it, and want to know what’s in it for them.
Americans see it, and they know.
Indeed they do.
__________________
SEEN ON FACEBOOK
By Glenn Reynolds | Instapundit
DO WE? DO WE REALLY? Byrne hits Ilhan Omar over Soleimani reaction: ‘We have to wonder what side is she on?’
ANGELO CODEVILLA: War With Iran? The United States has preferred toothless sanctions over victory. But sometimes the right sanctions are deadlier than atom bombs.
Because America is the world’s sine qua non economic power, U.S. “secondary sanctions”—meaning we will not trade with anyone who trades with the target country—are potentially deadlier than atom bombs. Trump added secondary financial sanctions as part of his revocation of Obama’s “Iran deal,” reducing Iran’s oil sales to a trickle. Compared to that measure of war, bombing a few ports would have been nothing.
Were the United States to place secondary sanctions on all manner of goods, especially food, the effect would be far greater than an invasion by the entire U.S. army. How the Iranian people would deal with the choice between starving and ending their government’s war on America would be their business.
I feel sure that Trump has thought this through. Also, remember: In the old days of pre-fracking, the U.S. Navy had to hold the Straits of Hormuz open. Now it only has to be able to close them.
SORRY KIDS, DON’T LISTEN TO HIM — YOU’RE GOING TO BE DRAFTED! Roger Kimball: An Antidote to the Iran Hysterics. “Trump has always shown that he prefers diplomacy to military action. At the same time, he understands, as did Ronald Reagan, that diplomacy only works when it is backed up by military strength and a willingness to exercise it.”

Government View of Bear Spray vs Firearms for Defense Against Bears