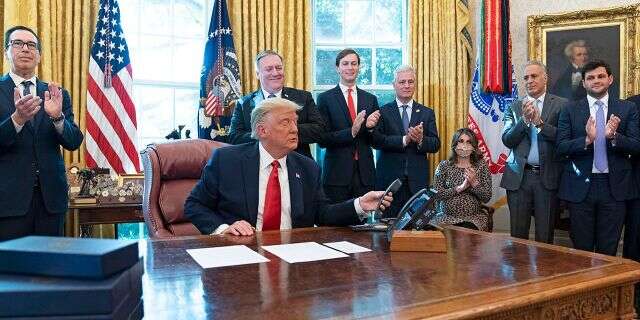 President Trump on Friday announced a peace deal that would normalize ties with between Israel and Sudan, claiming there “would be many more peace deals to come in the Middle East.”

Sudan is the third Arab state to do so as part of U.S.-brokered deals in the run-up to Election Day.

Trump invited reporters into the Oval Office while he was on the phone with the leaders of Israel and Sudan to discuss the latest U.S.-brokered deal in the run-up to Election Day.

Trump said Sudan had demonstrated a commitment to battling terrorism. “This is one of the great days in the history of Sudan,” Trump said, adding that Israel and Sudan have been in a state of war for decades.

“It is a new world,” Netanyahu said over the phone. “We are cooperating with everyone. Building a better future for all of us.”

The president said that at least five other countries wanted peace with Israel. “We have many lined up. They want to come in, get the deal done.”

Senior adviser to the president Jared Kushner, who has been involved in brokering the deals, agreed that other countries in the Middle East would soon follow suit.

Trump said that even Iran would “someday” normalize relations with Israel.

“Iran ultimately will become a member of this whole thing. Look, someday I’d love to help Iran get back on track. They’ve gone from a rich country to a poor country in three years,” he said.

The president also said that a deal between Israel and the Palestinian region may be on the horizon. “Palestinians, they’re wanting to do something. “I’m sure that will get done, too.”

Before the 2020 peace deals, Middle Eastern nation had not recognized Israel since Jordan in the 1990s.

Trump said he expects Saudi Arabia to come to the table for a deal soon.

Friday’s deal, which would deepen Sudan’s engagement with the West, follows Trump’s conditional agreement this week to remove the North African nation from the list of state sponsors of terrorism if it pays compensation to American victims of terror attacks.

Secretary of State Mike Pompeo said in a ceremony announcing the deal that victims of terror would receive $335 million in compensation from Sudan.

The money is meant for victims of the 1998 bombings of the U.S. Embassies in Kenya and Tanzania by the al-Qaida network while its leader, Osama bin Laden, was living in Sudan. Trump said on Tuesday that once the funds were transferred, he would remove Sudan from the list.

A senior U.S. official said Sudan had borrowed the money needed to pay that amount.

But these recent recognitions of Israel have undermined the traditional Arab consensus that there can be no normalization with Israel before the establishment of an independent Palestinian state. The Palestinians say the recognitions amount to betrayal, while Israel says the Palestinians have lost what they have seen as their “veto” over regional peace efforts.

Netanyahu has made it a priority to forge ties with formerly hostile countries in Africa and the Arab world in the absence of any progress with the Palestinians during his more than a decade in office.

The deal with Sudan will include aid and investment from Israel, particularly in technology and agriculture, along with further debt relief. It comes as Sudan and its transitional government teeter on the edge. Thousands have protested in the country’s capital Khartoum and other regions in recent days over dire economic conditions.

Trump said the deal “will enhance Israel’s security and end Sudan’s isolation from the world.”

The removal of the terror designation opens the door for Sudan to get international loans and aid needed to revive its battered economy and rescue the country’s transition to democracy.

Sudan is on a fragile path to democracy after a popular uprising last year led the military to overthrow the longtime autocrat, Omar al-Bashir. A military-civilian government rules the country, with elections possible in late 2022.

Sudanese Prime Minister Abdalla Hamdok thanked Trump for signing the executive order to remove Sudan from the terrorism list and said in a statement that he hoped to complete the process in a “timely manner.”

The normalization agreement had been in the works for some time but was finalized when Trump’s Mideast peace team, led by Jared Kushner and Avi Berkowitz, visited the region earlier this week to mark the first commercial flight between Israel and Bahrain and then went on to the United Arab Emirates, according to U.S. officials.

Unlike with Bahrain and the UAE, there has been a state of hostilities between Sudan and Israel, even if they had not been in direct conflict.

Unmentioned in the joint statement was that Sudan has agreed, according to the senior U.S. official, to designate Lebanon’s Hezbollah movement as a terrorist organization, something that Israel has long sought from its neighbors and others in the international community.

The Associated Press contributed to this report.