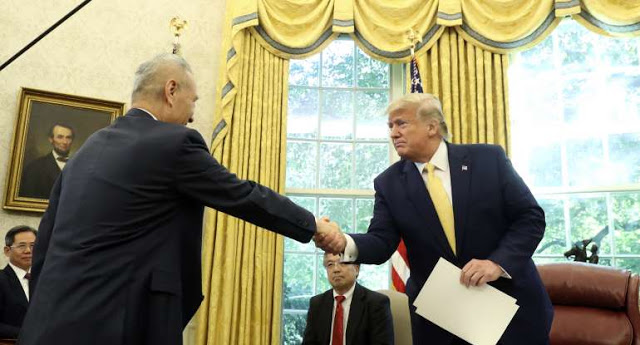 BY
President Donald Trump shakes hands with Vice Premier Liu He in the Oval Office of the White House in Washington, Friday, Oct. 11, 2019. (AP Photo/Andrew Harnik)
The press conference, live on television, from the Oval Office concluding this round of China trade negotiations was one of the more fascinating events of recent years. Spin, real, or a combination, the love-fest between President Trump and Chinese Vice Premier Liu He, both characterizing this first phase of their deal as not just an economic agreement but an important step forward for world peace, was one of those rare inspirational moments. Could human life really be that way?
It’s easy to be skeptical–and probably wise with Turkey running roughshod through Syria at this very moment–but we can all be grateful for the possibility that things could be different.
The Democrats, of course, were having none of it. Trump, the first president in decades to negotiate seriously with China, to confront them in any way, must be impeached! Chuck Schumer, obviously panicked the public might realize that something of importance was actually being done by a government official (rather than endlessly investigating their opponents for illusory crimes), immediately took to Twitter with a warning before any details were released.
What have you done for us lately, Chuck, but complain? Talk about weak. But never mind–impeachment über alles! And it turned out Huawei wasn’t in the deal anyway.
It’s rather a miracle, actually, that Trump was able to negotiate anything with so many domestic enemies out to get him 24/7. It couldn’t be more obvious that most Democrats and their media shills would rather Trump not succeed with China (or anything) if that meant his reelection.
Forget the prosperity and peace of the nearly two billion citizens of both countries, not to mention the rest of the world, linked inextricably as they are to the two largest economies. Orange Man must go. Trump Derangement Syndrome has turned into a pathology more severe than paranoid schizophrenia. It’s as if whenever Trump appears the entire Beltway and media have a psychotic break.
Far more interesting than these new “nattering nabobs of negativism” is the question of how we actually do deal with China. Trump, or any American leader, has to walk a tightrope. We all know the evil side of the Chinese regime (well, except for some NBA players and coaches). But it’s the most populous country in the world and, even though it brutally oppresses its minorities, not to mention the democracy protestors, many views, submerged as they may be, exist among its people, even among the Communist Party leadership. (Look up Lin Biao, if you don’t believe me.) Xi is the maximum leader for life–until he isn’t.
It’s incumbent on us to find the better, more moderate parts of the regime and subtly encourage them (forming economic ties that work is one way) while still making sure that as Americans we see and sympathize with the cause of the democracy demonstrators. Thus far, Trump has done a rather accomplished job of this for a “diplomatic amateur,” letting his sharp criticism of the brainless, pandering comments of NBA managers Steve Kerr and Gregg Popovich–their absurd and stunningly ignorant claims of human rights equivalency between the USA and Communist China–make clear his feelings about the protestors in Hong Kong.
Meanwhile, the president publicly praises depots like Xi and Kim, much to the consternation of the CNNs of the world. It’s a strategy, obviously. It’s not clear the extent to which it will work. But if it does even some of the time, it’s miles ahead of what his predecessors ever did.
https://pjmedia.com/rogerlsimon/trump-makes-real-progress-with-china-while-dems-play-impeachment/?utm_source=pjmedia&utm_medium=email&utm_campaign=nl_pm&newsletterad=&bcid=227841a8b1ca836b99e21ea36efa6859&recip=28551147

‘It says a lot’: Biden attacks Trump for not owning pets