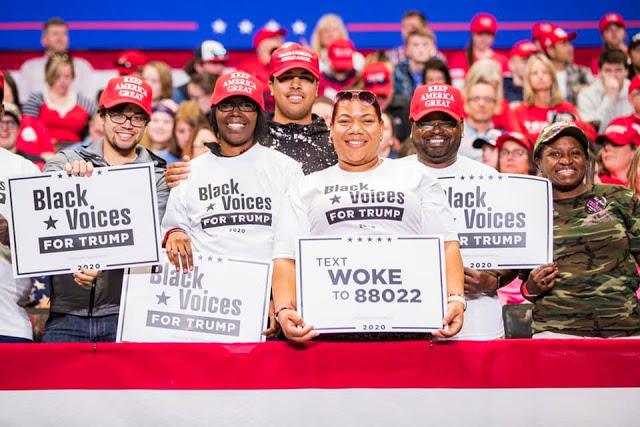 By Paul Bedard  | Washington Secrets Columnist
Buoyed by blacks and independent voters, as well as urban dwellers shocked by the Black Lives Matter protest violence raging in some cities, President Trump’s approval rating has hit a new high, according to a survey heavy with minority voters.
The latest Zogby Analytics poll just shared with Secrets had Trump’s approval at 52%. “The president has recorded his best job approval rating on record,” said pollster Jonathan Zogby.
What’s more, his approval rating among minorities was solid and, in the case of African Americans, shockingly high. Zogby said 36% of blacks approve of the president, as do 37% of Hispanics and 35% of Asians.
Approval among independent voters is also up, to 44%. And “intriguingly,” said Zogby, 23% of Democrats approve of Trump.
It was the latest to show that Trump’s approval went up during the Democratic National Convention. Rasmussen Reports had it at 51% at the end of the convention.
In a shock from past election years, Joe Biden got no convention poll bounce, according to a newly released Reuters/Ipsos poll.
The Republican National Convention still has two days to go. Last night’s address by first lady Melania Trump won good reviews. Tonight, Vice President Mike Pence speaks, and Thursday is Trump’s night.
Pollsters have been somewhat at a loss to explain the rise of Trump’s approval ratings, considering that there has been little positive news to help his standings other than the peace deal he helped negotiate between Israel and the United Arab Emirates.
Zogby, in his analysis, took a stab at the reasoning.
First, he said, his and other polls are confirming that the nation is nearly evenly divided politically and that despite some showing a big Biden lead, the race is extremely close. He suggested that the battle is for the “10%-20%” who haven’t made their minds up on who to vote for and who likely won’t make up their mind until Election Day, just like in 2016.
“We are as polarized a nation, on a level not seen since the Civil War,” said Zogby.
He also said that the violence playing out in cities such as Kenosha, Wisconsin, and Portland, Oregon, are pushing urban voters to Trump.
“Another factor continuing to help the president’s high approval rating is a rise in crime in our nation’s biggest cities. Unlike a year ago, the president is performing well with voters in large cities. It’s highly likely he is benefiting from the uptick in violence. His law-and-order message is resonating with urban voters at the moment,” said the analysis.
And he also suggested that Trump’s focus on issues important to blacks, including the economy, jobs, and criminal justice reform, has boosted his support among the voting group that traditionally goes all-in for Democratic presidential candidates.
“The president is also improving his job approval numbers with African Americans and millennial African Americans, which is a trend we witnessed last year. Trump has been making the case that he has done more for African American voters, by way of prison reform and previously low black unemployment, than Kamala Harris and Joe Biden, both of whom have been accused by the president for increasing incarceration among African Americans for generations on nonviolent drug charges,” said Zogby.
https://www.washingtonexaminer.com/washington-secrets/trump-pops-to-52-best-job-approval-rating-on-record-up-with-blacks-even-democrats

Homeowner shot a 14-year-old during burglary attempt. The 5 other teens with him were charged