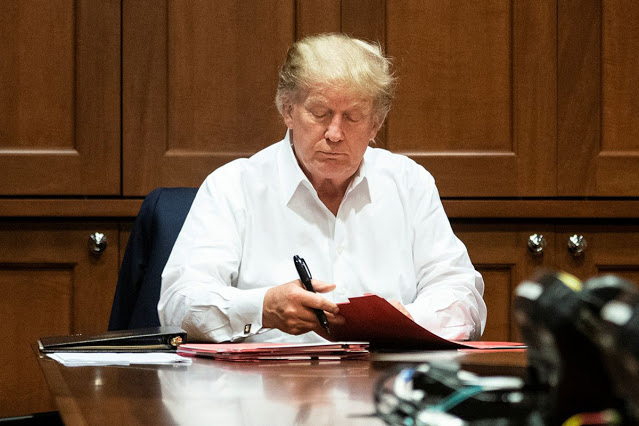 President Trump said he will be discharged from Walter Reed Military Medical Center Monday evening and will return to the White House.

“I will be leaving the great Walter Reed Medical Center today at 6:30 P.M,” Trump tweeted. “Feeling really good! Don’t be afraid of Covid. Don’t let it dominate your life. We have developed, under the Trump Administration, some really great drugs & knowledge. I feel better than I did 20 years ago!”

Trump’s comments come just before White House physician Dr. Sean Conley is set to brief the press on the president’s health at 3:00 p.m.

White House chief of staff Mark Meadows on Monday morning said he was “optimistic” that the president would be discharged from Walter Reed by Monday afternoon.

“Spoke to the president this morning,” Meadows said. “He continued to improve overnight and is ready to get back to a normal working schedule.”

He added that the president “will meet with his doctors and nurses this morning to make further assessments of his progress.”

Meadows added, “We are still optimistic that he will be able to return to the White House later today, with his medical professionals making that determination later today.”

The president was admitted to Walter Reed on Friday evening after experiencing what the White House, at the time, described as “mild symptoms.”

The president, upon being admitted to Walter Reed, had a fever, and according to a senior White House official, there was “real concern” about his “vitals.”

The president also has faced health scares throughout his battle with COVID-19, including two instances in which his blood oxygen level dropped suddenly. Doctors treated the president with a dose of the steroid dexamethasone in response.

A normal blood oxygen reading is between 95 and 100. Conley said that Trump had a “high fever” and a blood oxygen level below 94% on Friday and during “another episode” on Saturday.

But on Saturday, Conley said the president’s cardiac, kidney and liver functions were normal, and that the president was not on oxygen and was not having any difficulty breathing or walking.

Conley said over the weekend that the president had received an antibody cocktail, as well as zinc, Vitamin D, famotidine, melatonin and a daily aspirin. He also said Trump was taking a five day course of Remdesivir.

“My family is grateful for all of the prayers & support!” she tweeted Monday. “I am feeling good & will continue to rest at home.

“Thank you to medical staff & caretakers everywhere, & my continued prayers for those who are ill or have a family member impacted by the virus,” the first lady added.

“After testing negative consistently, including every day since Thursday, I tested positive for COVID-19 on Monday morning while experiencing no symptoms,” McEnany said in a statement. “No reporters, producers, or members of the press are listed as close contacts by the White House Medical Unit.”

Former counselor to the president Kellyanne Conway has also tested positive and former New Jersey Gov. Chris Christie, who participated in debate prep with the president recently, did too and was admitted to the hospital over the weekend.

McEnany said Sunday that the White House would not be releasing the names or the exact number of staffers who have become infected with the novel coronavirus, citing privacy concerns.

“There are privacy concerns,” McEnany said. “We take seriously safeguarding the information of personnel here in the White House.”

The president and first lady announced they tested positive for COVID-19 early Friday, just before 1:00 a.m., after it was revealed that Hicks tested positive on Thursday.

Danny DeVito endorses Bernie Sanders: ‘He is the man to beat Trump’