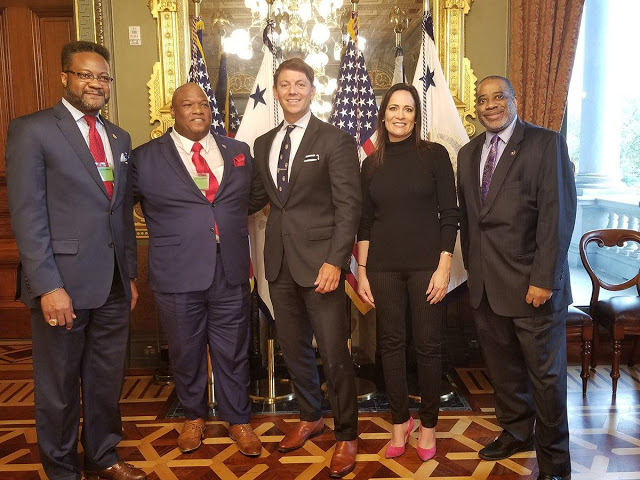 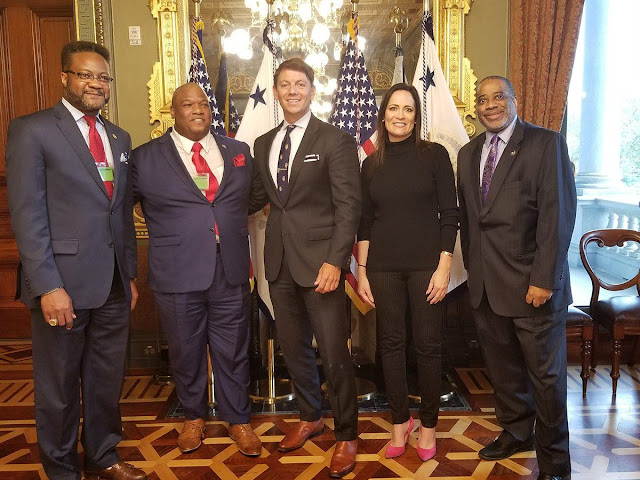 Left to right, Dr. U. A. Thompson Sr., Pastor Mark Burns, Hogan Gidley, Stephanie Grisham, and author Raynard Jackson. IMAGE CREDIT: SHUTTERSTOCK
The author — a prominent columnist in the African-American community — shares good news about a meeting last week at 1600 Pennsylvania Avenue.
Last week Pastor Mark Burns, a Trump family confidant, and I facilitated a meeting at the White House for members of the executive board of the National Newspaper Publisher Association (NNPA).
NNPA is a trade association of more than 200 black-owned newspapers from across the United States.
The group has been around for more than 75 years.
Today, these 200 black newspapers reach more than 20 million black readers each week. Many of these newspapers have active websites and social media presences as well.
To be sure, certain publishers were skeptical about anything substantive coming out of such a meeting at the White House — yet the skepticism all but disappeared by the end of it.
Top of Form
By completing the poll, you agree to receive emails from LifeZette and that you’ve read and agree to our privacy policy and legal statement.
Now, Pastor Burns — who runs Harvest Praise & Worship Center in South Carolina — and I have been tasked with making sure we follow up on all of the positive action items that flowed from the White House staff with whom we consulted.
When we called the Trump White House to gauge the openness to meeting with these newspaper owners, the answer was an unequivocal “yes.” Staff went on to ask, in fact, how soon we could organize this meeting.
We responded that the publishers were already in town for another conference, so we could facilitate asap. The White House seemed to moved heaven and earth to accommodate our meeting request.
Bottom of Form
Right about now, you might be asking, “Who in the White House would show this level of interest in meeting these influential newspaper publishers?”
The answer is that Stephanie Grisham, Hogan Gidley, and Darin Miller hosted the meeting with us.
Grisham is the White House press secretary; Gidley is the White House principal deputy press secretary; and Miller is deputy press secretary for Vice President Mike Pence.
This shows the level of seriousness given to this meeting. These three senior aides have the ear of the president and vice president; and we were told that both President Donald Trump and Vice President Pence would be briefed on our meeting and that the three individuals we met with would communicate how pleased they were with the dialogue that took place.
Oh, and did I tell you the White House thought enough of this group that the meeting didn’t just take place in just “any” of the meeting rooms in the White House — it took place in the vice president’s ceremonial office? This office is an ornate, historic room that is typically reserved for special occasions. Based on this, I will let you draw your own conclusions!
Grisham, Gidley, and Miller expressed great appreciation the group had made the time to get-together. The show of humility was very moving.
The aides asked the publishers to speak up about any concerns they might want or need addressed. The biggest concern by far was a lack of access to the White House and various administration officials.
The group was given an ironclad commitment this would no longer be an issue. They vowed to assist the publishers with access to various administration officials they were trying to reach for stories they were in the process of working on and reporting. Their job is to serve all of the American people, they stressed — not merely those who support the administration.
Related: Charles Barkley: Democrat Party Hasn’t Done Much for Black Americans
The aides indicated they wanted to have an ongoing dialogue with this group so that they could continue to build better relations with America’s black press.
There are about five follow-up items Pastor Burns and I will be handling; everyone involved thought this was a great first meeting.
The final thing Grisham, Gidley, and Miller said that left a good impression was that they were not necessarily expecting glowing stories about the administration — though they would welcome that. Rather, they felt it critical the administration was given an opportunity to present its side of whatever issue the media might be addressing. That’s all most people can ask.
The Trump administration has a great story to tell relative to the black community. It now has a chance to be heard directly by over 20 million blacks every week.
The Democrats’ biggest fear, it seems, is that the Trump administration will speak directly to the black community in a substantive, meaningful way without political input from the Left.
Yet Pastor Burns and I are committed to working with the Trump White House to share the administration’s message of hope and progress directly with the black community throughout the U.S.
After all, what do we have to lose?
Raynard Jackson is a Pulitzer Prize-nominated columnist as well as founder and chairman of Black Americans for a Better Future (BAFBF), a federally registered 527 Super PAC that aims to get more blacks involved with the Republican Party. BAFBF focuses on the black entrepreneur.
https://www.lifezette.com/2019/09/trumps-white-house-does-more-for-black-media-members-than-liberal-press-will-ever-tell-you/

Better Midler: MALICIOUS CONTENT IS COMING YOUR WAY; BE CAREFUL